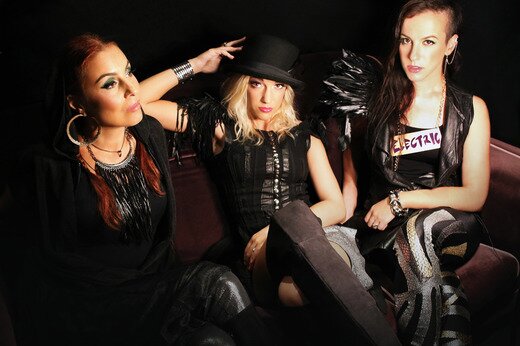 Ξ••    Guitarist Donna Grantis, drummer Hannah Ford Welton and bassist Ida Nielsen. Being able to improvise is a prerequisite for playing in a band with Prince. The music icon never performs the same show twice, and is even known to deviate from his rehearsed set list. So his backing musicians have to be prepared for the unexpected.
Ξ••    Guitarist Donna Grantis, drummer Hannah Ford Welton and bassist Ida Nielsen, who form Prince’s new female band, 3RDEYEGIRL, have learned to read his cues.
Ξ••    “A big part of playing with Prince is to know all his material,” Grantis tells Yahoo Music during a telephone interview with the band. “He likes to switch it up. He might go apart from the set list we have. We have to pay attention. If he wants to stop, he might start something else. He’s a great arranger, master of arranging songs on the spot.”
Ξ••    Having a background in jazz prepared the ladies for such spontaneity. “What’s really cool about this is the girls and I came into this camp with years of training and studying, more specifically jazz,” Grantis explains. “We all studied jazz for quite sometime. It is really a genre where you put your improv skills to the test. It’s like learning how to speak to other musicians in the form of music.”
Ξ••    Clearly, 3RDEYEGIRL’s ability to catch on quickly and master their instruments impressed the legendary soul rocker. On Tuesday, Prince releases two new albums, a solo set, Art Official Age, and PlectrumElectrum, 3RDEYEGIRL’s debut full length.
Ξ••    Prince doesn’t just expect 3RDEYEGIRL to quickly shift gears on stage. Though he writes the songs, he solicits their input during the recording process. “When he brings a song in to the three of us, he’ll tell us what the chords are, but, in general, he’s looking for us to arrange it,” Grantis shares. “He wants to hear [what I can do on guitar], he wants to hear Hannah add a real cool drum groove, and the same with Ida playing a super funky bass line.”
•Ξ••Ξ••Ξ••Ξ••Ξ••Ξ••Ξ••Ξ••Ξ••Ξ••Ξ••Ξ••Ξ••Ξ••Ξ••Ξ••Ξ••Ξ••Ξ••Ξ••