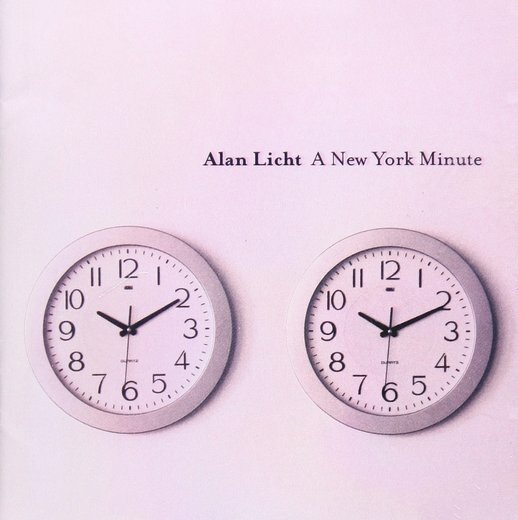 Alan Licht — A New York Minute (August 15, 2003)
•Ξ   Avant–garde guitarist Alan Licht occupies three niches at once: indie rock, classically based minimalism, and New York music journalism.
Born: June 6, 1968 in New Jersey
Location: New York, NY
Label: XI Records
Catalog Number: XI 128
Format: 2 CD
Packaging: Jewel case
Tracks: Disc 1: 4, Disc 2: 2
Total Time:      Disc 1: 47:14, Disc 2: 76:13
Country: United States
Released: August 15, 2003
Tracks:
Disc 1: Studio
1. A New York Minute      15:17
2. Freaky Friday      19:23
3. Muhammed Ali & the Crickets      6:41
4. Another Sky      5:31
Disc 2: Live
5. 14, Second, Fifth      37:21
6. Remington Khan (łHearing Test˛ mix/12–string version)      38:48
Credits:
•Ξ   Ben Bailes Editing
•Ξ   Kenneth Goldsmith Liner Notes
•Ξ   Jutta Koether Liner Notes
•Ξ   Alan Licht Bass, Composer, Guitar, Guitar (Electric), Organ
•Ξ   Aaron Mullan Editing, Engineer
•Ξ   Jim O’Rourke Editing, Engineer
•Ξ   Aki Onda Photography
•Ξ   Allan Tucker Mastering
•Ξ   Naomi Yang Typography
Description:
•Ξ   Working since the 1980s as an author for such mags as Forced Exposure, Halana, The Wire and many more; and player in outfits like Run On, Love Child, The Pacific Ocean, Text of Light, plus collaborations with dozens of avant musicans; Alan Licht occupies a front and center spot in the realm of left field New York music. A New York Minute is a two–for–the–price–of–one double CD set of experimental minimal works released in 2003. It all kicks off with the John Cage–inspired title track, which consists of a lengthy series of cut-up weather reports that eventually give way to ambient field recordings from a crowded subway station. “Freaky Friday” could easily put the most hyperactive kid into a trance. It’s exactly the kind of 20–minute–long plume full of mellow, repetitive guitar picking that you just don’t want to end. “Muhammed Ali and the Crickets” layers field recordings of said insects with blasts of fast–paced punk rock and African music for strange sonic brew with an exceptionally odd taste. “Another Sky” closes disc one with a delicious seven–layer burrito of shrill, multi–tracked synth drones.
•Ξ   The second disc consists of two long tracks that each approach the 40–minute mark. “14, Second, Fifth” sets a drill in motion upon open electric guitar strings. Waves of skittering guitar shimmer set aloft within the mind a feeling of nervous meditation. Much later, clouds of loud distortion envelope the listener as the piece winds down with some gentle harmonic picking. Fans of Alan Bryant or Rafael Toral should have no problem with this piece. “Remington Khan” fades in gradually over a period of three minutes with playful guitar picking that slowly segues into a rhythm sectionless rocker. •Ξ   The major music mutates numerous times until it finally dies down with a minor note coda that drifts off into the Twilight Zone — only to be rudely interrupted by scads of dissonant keyboard and guitar feedback. Thus this double–whammy set of minimalism is brought to a close as the author of the famed Minimal Top 10 list in Halana contributes his own fine efforts to the genre.
Review
Jutta Koether, liner note writer
•Ξ   A New York Minute lasts 2 CDs long: the title track consists of compiled, multi–tracked weather–reports from everyday in January 2001 in the city. Well, there we got our addictive quality of a repetition of the same but not quite the same. In the differences, those slots and gaps we fill in our desire, in that mood between active and passive in a sort of state of weakness lies sensuality, fluidity, moments of lust whatever. There is nothing we can do about the weather. But it is the most basic piece of information everybody takes in and processes all the time. And why not transformation in a minute or so, becoming part of it all. “Remington Khan” the longest track of all, recorded live, functions as a purely musical companion to “A New York Minute”. It keeps going and going goes on and on till you feel the boundaries of consciousness, pushing you forward, softly. Restrained, full of weird little moments, feelings, small sound patterns, that build up. Somewhere in there a kind of singing. An odd kind of expression of a collective voice. A perfect deep deadpan moment. “14 Second Fifth,” the other live track, is a loop that lasts 14 seconds, of a perfect fifth (pitch internal). “Another Sky” is pure calm, balm, yet within the realm of the unpredictable, causing a heightened attentiveness in the listener. Patterns reversing patterns, very subtle shifts and balances, made out of multi–tracked chord organ (one of those portable organs with an electric motor). Becoming organ. It ends on a very light note, but will resonate for a while.
Review
Kenneth Goldsmith, liner note writer
•Ξ   Alan Licht wears many hats. Over the years, he’s been a curator of music as well as a tireless performer. And he’s as well–known an author as he is a musician. It’s one thing to have eclectic tastes; it’s another to make a practice of them. While Licht’s earlier records have seamlessly melded his improvisational guitar playing with extended plundered sounds, A New York Minute takes things a few steps further. •Ξ   Instead of fusing the many sides of Licht into one monolithic mega–mix, this disc separates them into discreet compositions. There’s a lot more at stake here: the guitar pieces are showcased as guitar pieces and the plundered works are just that. The conceptual tendencies in Licht no longer hide behind his talent as a guitarist; likewise, the guitar pieces are no longer propped on hooky concepts that take our attention away from his fretwork. The good news is that both work: Licht is as strong a conceptual artist as he is a composer. •Ξ   http://www.experimentalintermedia.org/
Also:
Reviewed by: Todd Burns;  Score: C+
•Ξ   http://stylusmagazine.com/reviews/alan-licht/a-new-york-minute.htm
AllMusic Review by François Couture;  Score: ***
•Ξ   http://www.allmusic.com/album/a-new-york-minute-mw0000632174
_____________________________________________________________