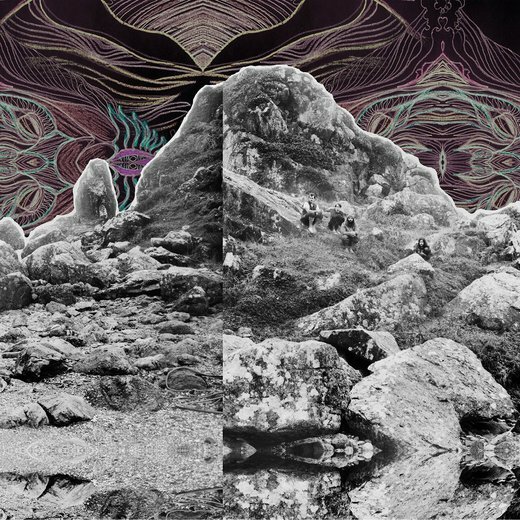 © Photo by JJ Koczan
♠•≡♠   History is littered with ill–fated attempts to summon the muse by holing up in a cabin, castle, cave or cottage. More often than not the exercise results in a self–indulgent lump of flab. Rarely does a period of hermitage produce anything world–shaking. And even more rarely is the end product as focused, arresting and downright jaw droppingly brilliant as All Them Witches‘ third and latest album.
♠•≡♠   The Tennessee outfit, who had garnered much praise for their first two albums, retreated to a cabin on the outskirts of a town in their home state called Pigeon Forge — home of Dolly Parton’s Appalachian–themed Dollywood — to work on their third. They emerged five days later with Dying Surfer Meets His Maker, their first for New West Records, a label known for its Americana and what pigeon–holers call alt–country releases.
♠•≡♠   It continues down the psychedelic path of its predecessor Lightning at the Door (‘El Centro’ is an eight–and–a–half–minute White Manna–style freakout), while keeping some of the steamy, swampy blues rock of their début Our Mother Electricity (‘Dirt Preachers’ is a stomper), but it is what they have added that makes this album so good: a cinematic outlook which serves as a celebration of the large landscape of the US as songs flow into one another like the changing view from a car window; and a vulnerability, world–weariness and melancholy which gives the album real depth and substance.

♠•≡♠   The opening track ‘Call Me Star’, with its acoustic arpeggio riff, signals that this album is a little different to what has come before from the band. Vocalist Charles Michael Parks Jr sounds ever so fragile as he spreads the three words of the title over as many bars, as the laconic riff expands into electric accents. The band spoke of a duality about living in the cabin, the tranquillity of the location on the side of a mountain juxtaposed with the tourist trap of Pigeon Forge. And you can imagine the title track coming together before the morning sun has burned off the mist and exposed the tacky town below.
♠•≡♠   The opener fades into ‘El Centro’, with its repeated two–note riff. It is a product of a band’s willingness to tour anywhere and everywhere and it grew from a gig they played in the town of the title — a place in the Californian desert, within spitting distance of Mexico and famous for being the metropolis that Cher was born in. There, one Halloween, a bar owner had told them to play whatever they want for a couple of hours. They jammed. And jammed. And jammed. While two members were wearing dresses.
♠•≡♠   The band tried to recreate in the cabin what the 20 or 30 people in that bar had witnessed and if the tumbling drums, wailing solos and hypnotic passages where guitars and bass lock together to form a pummelling climax are anything to go on, it sounds as if it must have been quite a night in El Centro.
♠•≡♠   After the feedback dies away, the more regular, yet still raucous, blues–rock of ‘Dirt Preachers’ follows. Then a plaintive harmonica signals a slow–down to ‘This is Where it all Falls Apart’. It follows seamlessly from the previous song, as a kind of coda, which expands into a seven–minute blues jam.
♠•≡♠   ‘Mellowing’, aside from the initial ‘one, two, three, four’ consists solely of two acoustic guitars playing what sounds a cross between an old–timey phrase and a baroque passage. And as is a common theme throughout the album, which is best listened to from beginning to end, it segues perfectly into ‘Open Passageways’, which is also dominated by an acoustic guitar and sounds defiantly alone, rather than lonely.
♠•≡♠   ‘Instrumental 2 (Welcome to the Caveman Future)’ is short but memorable thanks to the groove that the riff and drums suck the listener into, while ‘Talisman’, which follows, is wistful and sparse, with Parks accompanied by a single electric guitar for the first couple of minutes. It is a song that begs to be listened to while watching a sunset — or sunrise, perhaps — from a mountain. The final two minutes, where a single slightly distorted electric guitar starts the third segment of the song then launches into an other–worldly solo, are brilliant.

© All Them Witches, Nashvilles own "All Them Witches" perform at Live on the Green in Nashville Tennessee
♠•≡♠   The trip continues with the finale, ‘Blood and Sand — Milk and Endless Water’, which again begins with some evocative guitar work to conjure soundscapes of wide open spaces. From the sound of this, the band has sure seen some sights on their travels around the US. A throbbing, distorted bass then takes over, with guitars nipping in and Parks speaking preacher–style over the top. It is desert freeway music, of the best kind. Then the drums come to the fore, echoing, to tell us that this is the end of the trip. And at the end we are unsure if we have heard one, five or nine songs. Such is the seamlessness and perfectly judged order of the songs.
♠•≡♠   In short, the five days All Them Witches spent in a Tennessee cabin has produced a stunning album. Someone book them tickets for the island of St Helena for their next one. It is over 1,000 miles from the nearest major land mass — who knows what they could come up with in their time there.
Website: http://www.allthemwitches.org/
Twitter: https://twitter.com/allthemwitches
Facebook: https://www.facebook.com/allthemwitches
Press: SpeakeasyPR | Monica Seide |
Agent: Stu Walker | The Agency Group |
Dying Surfer Meets His Maker Bonus Bundle includes:
♠•≡♠ Two songs from the new album: “Dirt Preachers” and “Open Passageways”
♠•≡♠ All Them Witches, the Nashville psych–rock quartet whose recent Bonnaroo debut was heralded by Fuse, American Songwriter, Consequence of Sound and the Nashville Scene, release their label debut, Dying Surfer Meets His Maker, on October 30 via New West Records.
Brooklyn Vegan, who dubbed the outfit’s 2014 self–released album, Lightning at the Door, “a heady brew of swirling tones and heavy blue–eyed blues rock,” are streaming the new song “Dirt Preachers.” The song is one of the nine new tracks recorded during the band’s seclusion at a remote cabin in Pigeon Forge, Tenn.
♠•≡♠ “You couldn’t hardly walk in there, dodging cables, mics and guitars,” Parks says of the small space, “the cabin was a wreck. We immediately got up there, unloaded our 15–seater van and a trailer packed to the brim with gear, and started moving things around, set up amps, and a mixing board.” They recorded much of the album live, but used the studio as an instrument in itself, helmed by producer Mikey Allred and McLeod. The location, Parks says, also had an influence on the feel of the album. “Pigeon Forge is tourist central, with Dollywood and moonshine distilleries, pancake houses, and Christmas stores. But our cabin was up on the mountain. We were the only ones there. We didn’t have to worry about anyone calling us in for being loud. It was quiet. In the morning, the mist would be hanging over the city, then it would clear up and you’d see all these terrible tourist shops. It was nice to know we didn’t have to be a part of it. There’s a duality that happens throughout this record, that of the solitude of the mountain and the absolute Babylon that is Pigeon Forge.”
♠•≡♠ Heavy, heady and hypnotic, All Them Witches concoct a powerful and potent psychedelic sound that fuses bluesy soul, Southern swagger and thunderous hard rock. With their transfixing releases and a jam–filled live show where no two shows are the same, the band has amassed a devoted following and have become something of a sensation in the underground rock scene. “The band seemingly channels the churn of the universe and connects with a big, bad, uncaring cosmos,” wrote the Boston Globe, adding, “There is a primal ebb and flow at the core... The band’s mystic atmosphere, dark but not brutal, is the result of a tireless work ethic, a grueling tour schedule, and a tape trader’s compulsion for documenting every show.”