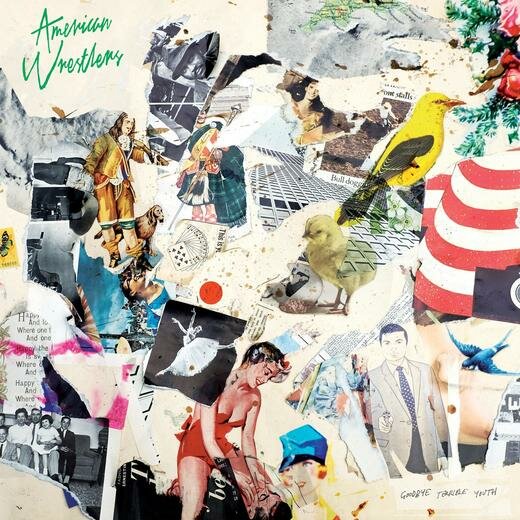 ♣   As McClure and co. look backward, their music only progresses forward. Goodbye Terrible Youth is much like teenage years in that way: starting to learn from the world around you what it means to be a functional (or dysfunctional) member of society. The record doesn’t provide any answers for today’s youth, but it does remind that others have gone through it and made it out in one piece. That alone can mean a lot in the throes of angsty youth.

© Pressphoto: Evan Cuttler~Wattles
Location: St. Louis, Missouri ~ London, UK
Genre: Shoegazey power pop
Album release: November 4, 2016
Record Label: Fat Possum
Duration:
Tracks:
1. Vote Thatcher    2:51
2. Give Up    3:25
3. So Long    3:39
4. Hello, Dear    3:07
5. Amazing Grace    3:50
6. Terrible Youth    4:17
7. Blind Kids    2:53
8. Someone Far Away    3:56
9. Real People    3:41
Credits:
♣   Ian Reitz   Bass
♣   Josh Van Hoorebeke   Drums
♣   Bridgette Imperial   Keys
♣   Gary McClure   Guitars/Singing
♣   Written and Recorded by Gary McClure in the city of St. Louis, MO (2016)
♣   Mixed by Clay Jones at Pete’s Room, Oxford, MS
♣   Mastered by Shelly Steffens at Chicago Mastering
♣   Artwork by Phillip Kay
Review
By Brian Burlage, NOVEMBER 1 2016 / Score: 7.1
♣   On his unabashedly personal new LP, indie rocker Gary McClure takes stock of his life, in distortion~heavy songs often filled with regret and loss, ugliness and shame.
♣   From 1999 to 2013, the American Wrestlers front man Gary McClure played guitar in the English shoegaze group Working for a Nuclear Free City. Despite being signed to the relatively small label Melodic Records (which just celebrated its 100th release in 2015), the band had big ideas and an even bigger sound — big enough, in fact, to land them a video game contract with Sony: they wrote “Silent Melody” for Infamous. Their dexterous, almost chameleon~like style stemmed from influences as disparate as Bill Evans and the Grateful Dead, and it managed to be psychedelic without sounding dated or hokey. Eventually, as band members began to focus more and more on solo projects, McClure took his omnivorous songwriting spirit elsewhere. He moved to St. Louis to marry Bridgette Imperial, and together they formed the core of American Wrestlers, whose self~titled 2015 debut was a similar grab~bag of musical influence.
♣   With Goodbye Terrible Youth, however, McClure seems to be turning his searchlight inward. The six~minute bedroom~rock epics from the 2015 album are absent here, as are the eight~track Tascam recorders they used to record it. The obvious shadow of other artists has faded, and what’s left here is an aging musician looking through himself to create something new out of the old. After all, the album’s main subject is described in its title: terrible youth. McClure isn’t shy about his memory. He doesn’t wince when he looks back. These are unabashedly personal and reflective songs, often filled with regret and loss, ugliness and shame. But, as McClure boldly sings on “Hello, Dear,” “Where goes youth, I go.”
♣   The album begins with “Vote Thatcher,” a death~obsessed track that speaks to a familiar theme for McClure: brutal policing. “I can always look to my son,” he sings, “to be stoned by policemen.” “Kelly,” the sixth track on 2015’s American Wrestlers, is also about police brutality, particularly the death of Kelly Thomas, a 37~year~old homeless man who was beaten into a coma by six police officers in 2011. It seems like a strange thing to begin an album about youth and memory with a song about modern policing, but there’s more to it. “My life for your throne,” McClure mourns on “Thatcher,” “I still can’t believe you died.” The words echo over a haunting synth melody. What is he bargaining for? Who is he bargaining with? We don’t get an answer. And as much as the album is about McClure’s own experience growing up, it’s also about the people who don’t live beyond youth. In this way, the music reflects both promise and tragedy in equal parts.
♣   Heavy guitar distortion — a staple in McClure’s work — colors over many of the songs on Terrible Youth. In “Give Up,” the album’s lead single, the constant buzz of rhythm guitar wins out over a catchy riff. “Amazing Grace,” a beautiful track about surrendering to happiness when the sun comes “bright across the rooftops,” bathes in a gentle hum, almost like sunshine itself. McClure’s use of distortion doesn’t evince ecstasy like it does for the Japandroids, nor does it mimic playfulness like it does for Youth Lagoon.  The distortion here is something else, something distressing. “Metal moans will multiply,” McClure sings on “Terrible Youth,” “we’re death in motion.” If the “metal moans” behind the distortion represent anything, it’s the discomfort of remembering where we’ve been, and as McClure suggests, where we’re going.
♣   What holds Terrible Youth back from becoming a really coherent, powerful statement is a kind of haphazardness in its arrangement. McClure doesn’t write choruses, he writes contrition, and sometimes this makes it difficult to take hold of any single resounding emotion in the music. Songs like “So Long” and “Blind Kids” rely on chord changes, but it’s rare for those changes, those shifts of feeling, to build toward anything greater.  And beyond casting an ‘80s sheen over the album, synth rhythms and melodies aren’t given any other direction or purpose — they rev the engine without propelling the car.
♣   Although the scattered nature of some of the songs keeps any single narrative from taking shape, the album is a significant improvement for a band that’s still coming into its own, still, in other words, in its youth. When the heartache of memory gets to be too much, American Wrestlers are there to show us, as McClure puts it best, that “All that weight/It could be but it’s make believe/And when it stops it’s nothing.”  ♣   http://pitchfork.com/
Also:
Gwilym Mumford, Thursday 3 November 2016 21.30 GMT / SCORE: ***
♣   https://www.theguardian.com/music/2016/nov/03/american-wrestlers-goodbye-terrible-youth-review
By Ian King / 31 OCTOBER 2016, 10:15 GMT / Score: 7.5
♣   https://www.thelineofbestfit.com/reviews/albums/american-wrestlers-goodbye-terrible-youth
BY DUSTY HENRY ON OCTOBER 27, 2016, 6:00AM / SCORE: B–
♣   http://consequenceofsound.net/2016/10/album-review-american-wrestlers-goodbye-terrible-youth/
BY CHRIS INGALLS, 1 November 2016 / Score: 8
♣   http://www.popmatters.com/review/american-wrestlers-goodbye-terrible-youth/
Interview
By Rachel Brodsky  |  October 20, 2016  |  10:00am
♣   https://www.pastemagazine.com/articles/2016/10/american-wrestlers.html

© Photo credit: Bridgette Imperial
Notes:
♣   First single “Give Up,” which American Wrestlers’ master mind Gary McClure described as:
♣   “I wrote Give Up in the basement of our two room house, in the murder inducing heat of a Saint Louis night, half a mile from the Mississippi river. It came out in one shot after I plugged in and hit a chord that rang out with a middle-era Clash jangle. I followed that chord into Strummerland and ended up going via some first album Foo Fighters deal to somewhere else. The descending guitar lead line came much later when I wanted to add something in the vain of the clean–chorus–reverb guitar runs of contemporary indieists. A friend told me that it’s a song about feeling trapped. I don’t know. He’s probably right. “I better watch lest my pretense is a loaded gun for pseudo Chuck Bukow’s to wave” is my favorite lyric–that–shouldn’t–really–be–a–lyric that I ever wrote. “If I take my time they’ll bury me alive” is certainly the closest to the bone. There are some that are totally indecipherable and which I don’t think are even words. Those are undoubtably the most honest of all.”
Bandcamp: https://americanwrestlersband.bandcamp.com/album/goodbye-terrible-youth
Facebook: https://www.facebook.com/americanwrestlers/
Label: http://fatpossum.com/
♣♣♣♣♣♣♣♣♣♣♣♣♣♣♣♣____________________________♣♣♣♣♣♣♣♣♣♣♣♣♣♣♣♣