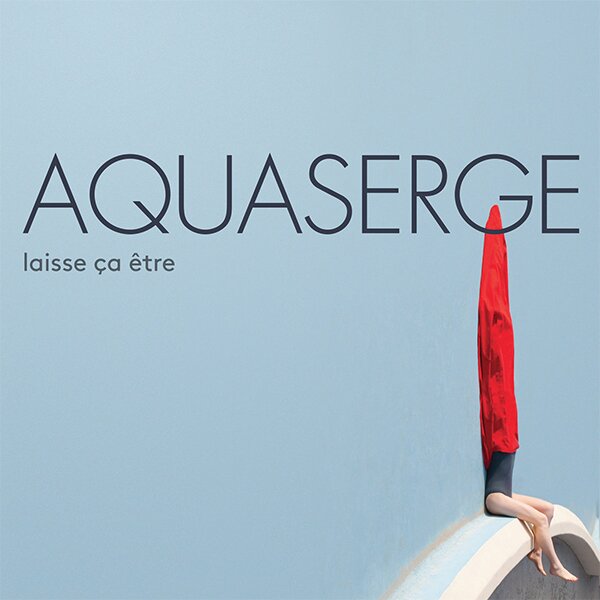 Review
AUTHOR: Andrew Smith, Score: ***½
★♠•♠★  Aquaserge is a fun and experimental pop super group. Its members have graced the stages with dreamy indie connoisseurs like Tame Impala, Stereolab, Melody’s Echo Chamber, Acid Mothers Temple, and Aksak Maboul. For several years, they operated more like a nebula or giant web than a band, shifting members and influences as a massive collaborative effort of over 60 musicians. The band is now a more concrete project with 5 core members: Benjamin Glibert (guitar & vocals), Julien Gasc (keys & vocals), Audrey Ginestet (bass & vocals), Manon Glibert (clarinets), and drummers Julien Chamla and Julien Barbagallo. They are wildly creative and exciting on their new work, Laisse Ça Être.
★♠•♠★  On this effort, the group locked themselves in a studio for three 10~day sessions and collectively wrote everything from scratch. But first, what does “laisse ça être” mean? Direct translation is close to “let it be”, the title of a famous album we all know that began as a film project. Similarly, this Aquaserge album was based off a cinematic endeavour. Filmmaker Guillaume Bordier, a friend and confidant to the band, wanted to try and portray the riddle of ‘what is collective artistic creation?’ Thus, all of the recording sessions were documented and filmed, and eventually will be released in the movie, “Un Film d’Aquaserge”.
★♠•♠★  This album is fun, free flowing, groovy and light~hearted. Many songs were recorded in one take, and the members themselves did all production, engineering, and mixing. The second song on the album, “Virage sud”, opens with a simple, eerie ballad. It starts to seemingly fall apart, drifting out of time just before it explodes into a joyful, energetic, and upbeat track. “Tintin on est bien mon loulou” follows suit with a driving, New Orleans funk inspired groove. Towards the end, “Charme d’orient” is one of the darker songs on the album. It has a slinky blues feel, a deep brass section backbone, and whirlwind of free~form jazz vibraphone. However, this instrumental tune will surprise you with its clever French sophistication.
★♠•♠★  Aquaserge’s anthems are pleasant and entertaining. The members have combined an insane amount of background and inspiration into this album. Dreamy pop meets free jazz, and psychedelic haze meets 60s rock & roll. With small touches in between of waltz, swing, samba, and afrobeat — think Europeans travelling to the Caribbean — Laisse Ça Être is adventuresome and relaxing, like a French short film shot on the shores of Nice.
★♠•♠★  http://spillmagazine.com/
Label: http://www.crammed.be/
Bandcamp: https://aquaserge.bandcamp.com/album/laisse-a-tre
Facebook: https://www.facebook.com/aquasergee/
Twitter: https://twitter.com/sergeaqua?lang=en
••••••••••••_____________________________________••••••••••••