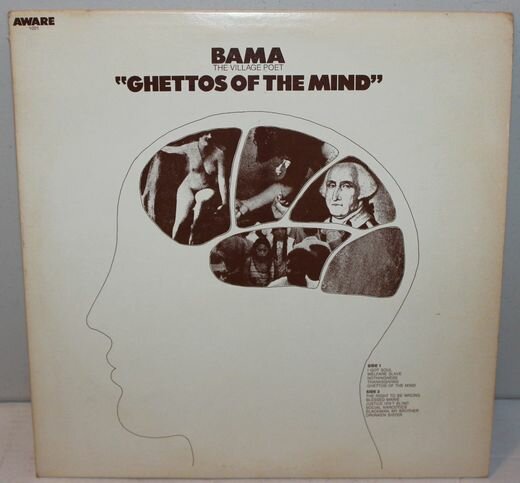 Bama (The Village Poet) — Ghettos of the Mind (1972)
♠♠   A lost classic in the funky poetry mode of the 70s — and right up there with the best work from the time by the Last Poets, Jim Ingram, or Gil Scott Heron! Bama’s got a rough–edged voice that works very well with the funkier backings of the set — handled by a team that includes Bernard Purdie on drums, Richard Tee on keyboards, and Cornell Dupree on guitar — and this rough vocal style also fits the themes of the tunes, which are still as political and righteous as other work in the genre, but a bit more down to earth as well. The music itself was arranged and composed by Jimmy Wizner and Billy Jackson — and titles include “Ghettos Of The Mind”, “The Right To Be Wrong”, “Nothingness”, “Drunken Sister”, “I Got Soul”, “Welfare Slave”, “Social Narcotics” and “Blackman, My Brother”.  © 1996–2016, Dusty Groove, Inc.