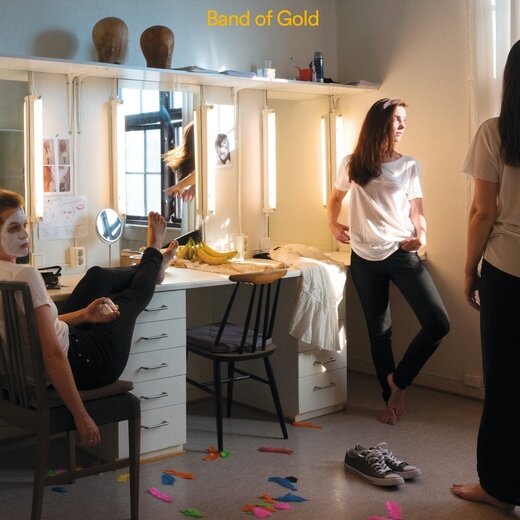 Band Of Gold — Where’s The Magic

Location: Oslo, Norway
Album release: 23rd March, 2018
Record Label: Jansen Plateproduksjon
Duration:
Tracks:
01. Bring Back     7:38
02. I Wanna Dance with You Again     3:47
03. Away with You     4:18
04. Into the Void     2:58
05. I Could Spot You in a Hundred Miles     4:17
06. Where’s the Magic     4:10
07. Well Who Am I     3:16
08. Look at Me     2:57
℗ 2018 Jansen Records
Description:
♠♠       Band of Gold are back, and they continue where their debut album left off. After their success the last time, it would have been easy to lose the feeling of freedom that made its mark on both the recording and the music. But it was never a risk that this would happen here. Quite the reverse. The band went into the studio and did just what they wanted, and the collaboration between Nina Mortvedt and Nikolai Hængsle, AKA the core of Band of Gold, works best when they do just what they like.
♠♠       When Band of Gold released their debut album in autumn 2015, they were a pleasant surprise for many people. Both Nina and Nikolai have spent a long time on the Norwegian music scene, but this was a project they’d worked on in the quiet. When the album was released, though, it was no doubt that this was a band that had the right to live. The positive reviews were many, the fans flocked to their concerts, and the whole thing peaked when they won the Nordic Music Prize during by: Larm 2016, as the first Norwegian artist ever.
♠♠       But now Band of Gold are no longer a secret. Now there are expectations. And they have been fulfilled.
♠♠       «Where’s the Magic» is the band’s second album — an album about the passion we all seek and crave for. It’s not hard to find passion in Band of Gold’s songs. It’s on every chord here, and we get a ferocity that the debut album from 2015 didn’t have. On «I Wanna Dance With You Again», the first single from «Where’s the Magic», Mortvedt’s vocals are admirable, and underneath its lovely arrangement we find a pop song that’s completely irresistible.
♠♠       But the album doesn’t just have grand pop songs. «Where’s the Magic» also contains experimental songs that challenge the listeners, ballads so beautiful that they will bring tears to your eyes, and slow pop songs that will force you to play the album again.
♠♠       A rock solid sequel, from a band that’s better than ever.
Review
Written by Neil Hodge / 10 February, 2018. Score: 8
♠♠       2015’s Nordic Music Prize winning duo return with mesmerizing second album packed full of atmospheric stylish pop nuggets.
♠♠       Over the years the Nordic region has produced a number of talented, melodious bands with a sophisticated pop leaning and intelligent song~writing. Band of Gold are no exception to this rule.
♠♠       The duo of talented songwriter Nina Mortvedt and musician/producer Nikolai Eilertsen have produced an exquisite absorbing album full of often melancholic but warm sophisticated songs that envelop you and leave you with a fuzzy glow.
♠♠       Amongst these there are a couple of sorrowful affecting songs arousing some deep emotion. Look at Me with its unassuming folk/country tinged steel guitar turns the melancholia up a notch, Cowboys Junkies mixed with the ghost of Karen Carpenter. Into the Void is another of these moody songs with plaintive acoustic guitar and distorted heart~rending vocal adding to the atmosphere and theme of the song.
♠♠       Nikolai’s sumptuous bass guitar features heavily on this album to great effect, (Where’s the Magic?, Away With Me) this rich sound layered with Nina’s lush, silken vocals and a variety of instruments all combine to bring an exquisite mix of classic pop, with an element of folk/country and a sprinkling of electronica to the party.
♠♠       The epic Bring Back has two distinctive parts while lead single I Wanna Dance with You Again evokes the spirit of Fleetwood Mac. A depth is added to the initially seemingly throwaway lyric of Well Who Am I  with throbbing bass and squally bursts of cacophonic electric guitar. While I Could Spot You in a Hundred Miles begins sparsely building and layering vocals to an intense crescendo.
♠♠       This is a hypnotic listen and the combination of Nina’s vocal and the musicianship which veers between sophisticated and simplistically effective is often achingly beautiful.   ♠♠       http://louderthanwar.com/
Bandcamp: https://bandofgoldmusic.bandcamp.com/album/wheres-the-magic
Facebook: https://www.facebook.com/bandofgoldofficial/
Agent
Booking:
Vegard Waske / Morten Gjersum for UFA
/ Tlf: 46786468
Label: https://jansenrecords.com/
Also:
♠♠       http://www.tigernet.no/item/152342--band-of-gold--where%27s-the-magic--vinyl
_____________________________________________________________