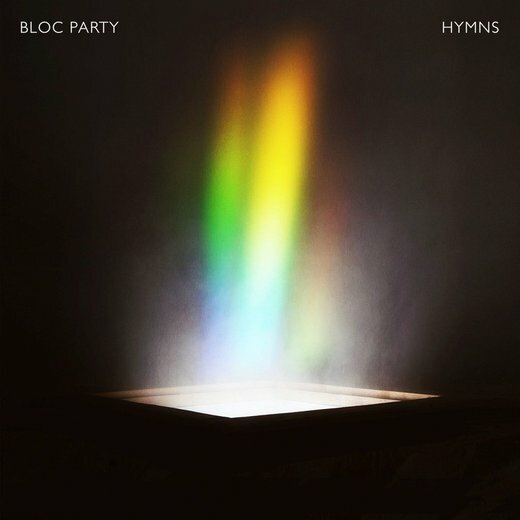 © Bloc Party, The Glass House, Pomona, CA, August 19th, 2015. Credit: Benjamin Combs
Review
BY KYLE ANDERSON • @KYLEAEW, Score: A–
?   When Bloc Party first stormed the gates of alt nation with their breakout single “Helicopter” in 2005, they provided the answer to a long-burning question: Who could bridge the gap between stodgy underground rock and the rapidly evolving world of dance music? “Helicopter” was a chugging, spasm–worthy call to arms, and Bloc Party’s debut, Silent Alarm, seemed to signify a brave new world. Since their debut, Bloc Party have spent the years in flux. They’ve wavered between lighters–up guitar–god urges (2007’s soaring sing–along anthem “I Still Remember”) and detours into various electronic rabbit holes (much of 2008’s pulsating Intimacy) — with mixed results. Their latest, Hymns, represents yet another rebirth, this time with a new rhythm section and a fresh batch of digital tricks. Frontman Kele Okereke has been more committed than most of his peers in trying to extract humanity from machines and infusing bloops and bleeps with something resembling a soul, and first single “The Love Within” may be his greatest feat in that regard. An insistent techno backbeat, mutated organ hums, and sliding robo–moans give way to a blissful chorus, where he declares, “The love within is moving upwards, sweeter than any drug.” From there, Hymns mutates. “Into the Earth” is a bluesy jangle, while “Fortress” has an icy, neo–soul throb. Okereke holds it all together with his warm croon and penchant for writing lyrics that search for spiritual salvation in the midst of corporeal pleasures. Bloc Party never became the saviors they were supposed to be, but putting out your best work after a decade of near–constant turmoil has to count for something. A–
?   http://www.ew.com/

★   HYMNS is a rebirth for Bloc Party. After 16 years as a band, countless world tours and awards and four studio albums, Kele Okereke and Russell Lissack are taking it back to where it all began.
★   “Bloc Party started with just Kele and I, and we used to write the songs together, and we found other people and grew from that. It feels like that’s happened again,” says Russell. They started writing together, just the two of them, in 2014, and were joined at various stages by the two new members who have made Bloc Party a four–piece again: bassist Justin Harris, whom the band met in his previous guise as part of the Portland indie rock band Menomena, and drummer Louise Bartle, a 21–year–old that the pair discovered on YouTube, and who “blew us away. It’s good to have someone bringing that energy of doing it for the first time. It’s made us all excited about going forward.”
★   As the title suggests, the fifth Bloc Party record is about faith and devotion, but it is not, Kele insists, a religious epiphany. “I grew up in a religious house so I’m fully aware of the imagery, but I’m not Christian. It’s not something I subscribe to.” Instead, the concept came to him after seeing the author Hanif Kureishi, whom Kele has admired since he was at school, talk at the Southbank Centre in London. The author of My Beautiful Laundrette and Intimacy was discussing evangelical art and how unfashionable it has become. “And that point stuck with me because it seemed like for me music had originated in a religious place. The first music I ever heard was hymns at school. I started to think, if I was going to make music that had a spiritual dimension, that was sacred to me and to the things that I held important, how would I do it?”
★   The result is a record that sounds like a band growing and changing, pushing new sounds via new approaches, and resulting in more free, less constricted Bloc Party. HYMNS marks a departure for the band sonically, too, with Kele and Russell trying sounds and approaches that they have never previously explored.
★   “It’s still a very live record,” says Russell. “Everything has been played, though it doesn’t necessarily sound like that. We take a lot of influence from electronic music, for example, and then try to bring that into a completely different environment.” Kele is astounded at the results. “What Russell is doing now is completely blowing my mind. He’s using the guitar as an instrument of white noise, as well as a melodic tool. I’m super–excited about getting this music in front of people.”
Website: http://blocparty.com/
Twitter: https://twitter.com/blocparty
Facebook: https://www.facebook.com/blocpartyofficial
Press:
Agent: CAA (N. America) / 13 Artists (Rest of the World)