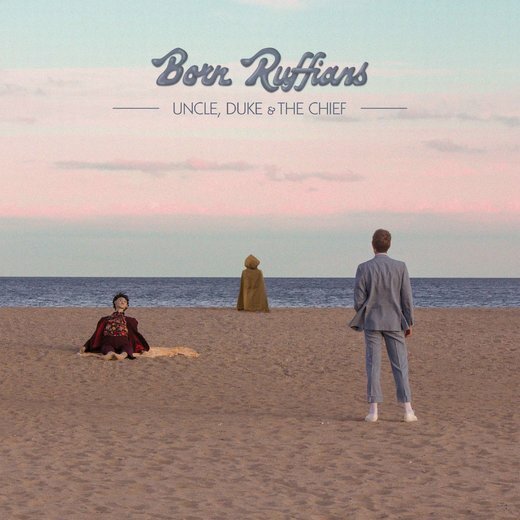 © Author: Jeff Jewiss/Sticky Magazine. Born Ruffians at The Phoenix 2010 03 26
Genre: Indie Pop, Indie Rock
Location: Midland, Ontario, Canada
Album release: February 16, 2018
Record Label: Paper Bags
Duration:     30:34
Tracks:
01. Forget Me     3:36
02. Miss You     2:59
03. Side Tracked     3:49
04. Fade To Black     4:03
05. Love Too Soon     2:42
06. Spread So Thin     3:18
07. Tricky     3:09
08. Ring That Bell     2:26
09. Working Together     4:32
Members:
→          Mitch Derosier
→          Steve Hamelin
→          Luke Lalonde
→          Andy Lloyd
Description:
←◊→          Produced by Richard Swift, Uncle, Duke & The Chief is a record less concerned with what sounds hip than what feels good. In the Ruffians’ case that meant shedding some of their more arty influences and reconnecting with the sounds they first heard on their parents’ turntables as kids: Buddy Holly, The Everly Brothers and pre~psychedelic Beatles. “It’s about going back to the deepest, most satisfying itched to scratch,” says Lalonde. And in doing so, the album takes you back to a time when the Ruffians sounded less like a band and more like a gang, raising a wild ruckus and peaking in telepathic tongues.
Review
By Madison Desler  |  February 14, 2018  |  10:21am  |  Score: 8.3
←◊→          “Someday/A white light/Will come for you/To comfort you” are the lines that open the fifth LP from Canadian indie~rockers Born Ruffians. Over warm acoustic strumming and feel~good handclaps, the lines serve as the perfect introduction to what follows: nine tracks dealing with death, life, aging, ambition motivation and the often unsatisfying prospect of being human. It’s all presented in a life~affirming package, the ultimate uplift coming from our shared experience of not being able to avoid any of it.
←◊→          It’s this duality that, much like life, makes Uncle, Duke, & The Chief so compelling. The lyrical weight of the album comes from both David Bowie’s passing, which directly inspired the album’s first track, as well as a cancer diagnosis for frontman Luke Lalonde’s father. The musical ease and exuberance comes from the return of founding member, drummer Steve Hamelin, a electrically stimulating event for Lalonde and bassist Mitch DeRosier who were feeling less~than~thrilled about their recent compliance with indie~radio convention.
←◊→          Described by the band as “going back to the deepest, most satisfying itch to scratch,” the album is certainly a return. You can hear the downsizing on “Miss You,” stripped~down guitar and Hamelin’s trusty kick~drum staying out of the way of the soaring chorus. All energy, energy, energy, “Fade To Black” wouldn’t be out of place on the first album. As Hamelin’s propulsive drumming combining with Lalonde’s inherent, punk playfulness, they take things back to when their songs felt like being on a rollercoaster, zooming around corners and dropping, clattering down the wooden track into the exhilaration of the chorus. Even “Side~Tracked,” which takes a laid~back turn with soul~inflected guitar and an easy tempo, hits the melancholy sweet~spot. Its talk of wasted potential and lack of follow through cushioned by a cascading hook that you’ll be singing for days.
←◊→          Not that the old playbook is all they’ve got up their sleeve. “Love Too Soon” sounds like peak Brian Wilson, the sweetly mournful whistles and lyrics about frowns “filled with lowered expectations” showing a new maturity. “Spread So Thin” takes things in a shimmering, almost soft~rock direction, as Lalonde details a dream he had about meeting his own father as a young man.
←◊→          Richard Swift  (Foxygen, The Shins) produces, wisely holding back and letting the trio get back to their roots. While there is a certain Shins~iness that makes itself known throughout, that could have less to do with Swift’s involvement than it does with Lalonde’s knack for hiding mountains of angst inside sunny, catchy melodies (the pleasantly lazy “Working Together” is about a couple’s decision to terminate an unplanned pregnancy). At nine tracks, there’s not a flop in the bunch, making Uncle, Duke, & The Chief an extremely likable return to form from an extremely likable band.
←◊→          https://www.pastemagazine.com/
Label: https://shop.paperbagrecords.com/
Website: http://www.bornruffians.ca/
Twitter: https://twitter.com/bornruffians
Facebook: https://www.facebook.com/BornRuffians/
Studio albums:
←◊→          2008 Red, Yellow & Blue Warp Records/Paper Bag Records
←◊→          2010 Say It Warp Records/Paper Bag Records
←◊→          2013 Birthmarks Yep Roc Records  /Paper Bag Records
←◊→          2015 Ruff Yep Roc Records/Paper Bag Records
←◊→          2018 Uncle, Duke & The Chief Paper Bag Records