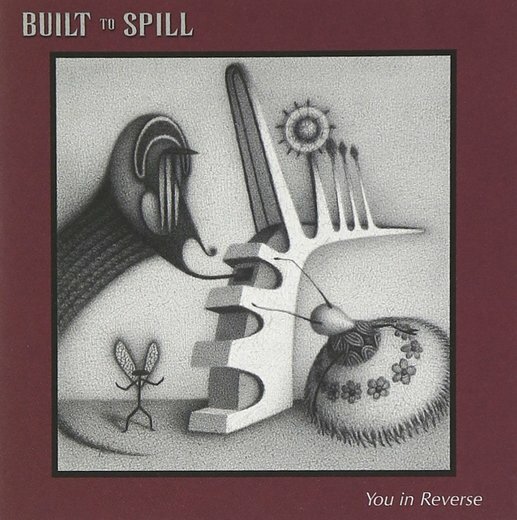 Built To Spill — You In Reverse (April 11, 2006)
Ξ★Ξ   Robert Christgau sice cituje strýčka Neila, že “je to všechno jedna píseň s výjimkou “Conventional Wisdom” a “Mess With Time””, čas je však poctivý chirurg a umí vyoperovat i miniaturní názorový nádor. One of the most popular and influential indie rock bands of the 1990s, progressing from sparse lo–fi to sophisticated emo.
Ξ★Ξ   It’s yet another successful reincarnation for Doug Martsch and the guys of Built to Spill. The latest album, You in Reverse, dropped this summer to positive reviews of its lyrics, melodies, guitars — even the variety of songs present has garnered attention from critics.

Product Description
Ξ★Ξ   One of the most critically acclaimed of Modern Rock bands, Built To Spill returns with its long–awaited album, the first in five years. Putting aside extensive overdubs and an atmosphere sweep, You in Reverse captures the organic, loose, impromptu feel of the band’s jams. Led by influential alt–rock hero Doug Martsch and sprouting new influences and a fresh feel, Built To Spill drives ahead with You in Reverse. Warner. 2006.
Amazon.com
Ξ★Ξ   It took Doug Martsch five years to complete this album so what’s another two minutes? That’s precisely how long it takes to sit through a nail–biting instrumental intro before the singer chimes in and you realize that, whew!, he still has it. The quirky, Idaho–born indie–rock group’s first album since 2001’s Ancient Melodies of the Future, is positively radiant. The meandering melodies have been reigned in but the songs still don’t feel like they’re rushing to get anywhere, even on the double–paced “Conventional Wisdom.” On tracks such as “Liar” and “The Wait” the spacey guitar solos are tempered by sweet touches of slide guitar and a back porch rhythm. Meanwhile, there’s a definite Neil Young influence creeping through “Wherever You Go” and “Gone,” which makes the band that was weird enough to inspire Modest Mouse weirder than ever. — Aidin Vaziri

Review
Stephanie Everett
Ξ★Ξ   It’s yet another successful reincarnation for Doug Martsch and the guys of Built to Spill. The latest album, You in Reverse, dropped this summer to positive reviews of its lyrics, melodies, guitars ­­— even the variety of songs present has garnered attention from critics.
Ξ★Ξ   With the latest lineup of Martsch, Scott Plouf, Jim Roth, Brett Nelson, and Brett Netson, this is the most experienced group that Built to Spill has ever seen. Playing and touring with guys familiar to the band has been a lot more fun for Martsch than on previous setups, especially when it came to recording.
Ξ★Ξ   In the past, recording was something done in layers while everyone was learning their parts, while this time around the songs were recorded in almost one shot. For You in Reverse a lot of what comes out was the band trying out new things, and trying to (and succeeding in) incorporating all of the members of the band, a challenging feat now that there are three guitars.
Ξ★Ξ   Built to Spill manage to keep their Indie rep and appeal to that fan base despite being signed and promoted to a major label. “Warner lets us do what we want to do,” says Martsch, and despite their appeal to the Indie–faithful he assures that they are “not trying to be anything.” The band is all about the music; so do them a favour ­— just buy the album and enjoy the goods on offer.
Ξ★Ξ   http://www.aestheticamagazine.com/

AllMusic Review by Tim Sendra;  Score: ****
Ξ★Ξ   Built to Spill haven’t released an album for five years, and the time off seems to have rejuvenated the band — You in Reverse is full of fire and energy. The bandmembers play with a thrilling blend of abandon and sensitivity on this mix of accessible guitar rockers, twisting and turning guitar workouts, and somber balladry with enough intelligence and emotion to put groups half their age to shame (and by the looks of the gray in their beards, they are getting up there). Many of the songs on You in Reverse are midtempo ballads, some quiet and autumnal (“Traces”), most trippy and bursting with wild and dramatic guitar solos (“The Wait,” “Gone”). All of them are quite heart–rending, with Doug Martsch’s melancholy everyman vocals and the emotion (in his voice but especially in the guitars) flowing like tears from the speakers. Most of the tracks also feature spiraling guitar solos and climaxes that conjure up images of the bandmembers on–stage at an outdoor stadium jamming their beards off as the crowd goes bananas. These songs are impressive, but the album really shines on the tracks that boost the tempo. “Conventional Wisdom” is a raging rocker that rides an inspired guitar melody into alt–rock guitar nirvana, sounding like the best tune Dinosaur Jr. never wrote (although those slackers never would have thrown a chamber music–inspired instrumental bridge into the middle of a song before freaking out with an epic solo). “Mess with Time” charges ahead like an angry rhino, kicking up guitar sparks and sounding a lot like classic Wipers in the process. Best of all is the amazing “Goin’ Against Your Mind,” an almost nine–minute guitar explosion that kicks off the album in breathtaking style. By the time it’s through playing, you’ll be hard–pressed to imagine a way the rest of the album could stand up to its intensity and drama. That the record does manage to acquit itself superbly is quite an accomplishment. Though there are no great surprises on You in Reverse, it is one of Built to Spill’s strongest efforts, and anyone who has followed their career knows that this is high praise indeed.
Website: http://www.builttospill.com/
Twitter: https://twitter.com/Built_2_Spill
Facebook: https://www.facebook.com/builttospill
Robert Christgau: http://www.robertchristgau.com/get_artist.php?name=Built+to+Spill