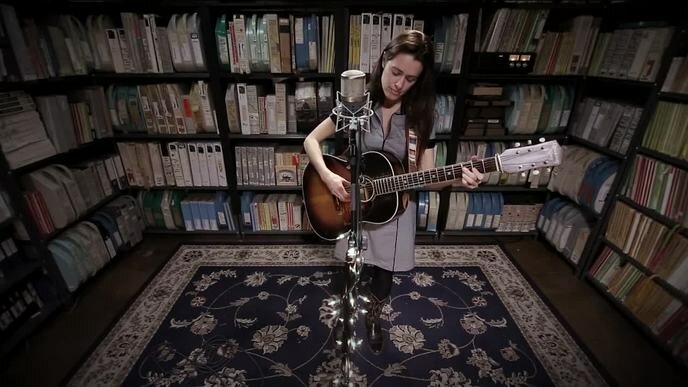 •       American singer~songwriter. Caitlin Canty delivers her songs with a 1930’s Recording King guitar and a dusky alto.
•       Reckless Skyline features an all~star band on twelve songs that veer nimbly between country ballads and straight~up rockers, dark blues and sparsely arranged folk.
Birth name: Caitlin Canty
Born: Proctor, Vermont
Genres: Americana, Folk, Alternative country
Occupation(s): songwriter, singer
Instruments: Vocals, Guitar
Location: Nashville, Tennessee
Sounds Like: Thoughtfully constructed alt~folk with just the right amount of twang
For Fans of: Amanda Shires, Aoife O’Donovan, Sara Watkins
•       Why You Should Pay Attention: Caitlin Canty’s 2015 album Reckless Skyline made the Nashville transplant something of a critical darling, landing on several “best of” lists and laying the groundwork for a couple of years that would see Canty spending a lot of time on the road. On March 30th, she’ll release a new album, Motel Bouquet, which draws from her experiences — both personal and musical — during that fruitful time. Noam Pikelny (of Punch Brothers fame) produced the album, which also features special contributions from Aoife O’Donovan and Stuart Duncan. Dreamy and daring, it’s the perfect LP for ushering in the first hazy days of spring.
•       She Says: “Since releasing my last record, I’ve spent a lot of time traveling around the country playing live shows, and that experience has given me a surer footing as a singer and a songwriter. In 2015, I moved from a life spent in the Northeast to a fresh start in Nashville. I wrote the songs that became Motel Bouquet in the ashes of one life and in the soil and seeds of another. I’ve been trying to get out of the way of the songs while writing them and let them be what they want to be. And I’ve been writing on an old Kalamazoo that I play, tuned down a full step. Sorrow and songs just pour out of that guitar.”

© Caitlin Canty with Recording King guitar. Photo credit: Jay Sansone
Hear for Yourself: The hypnotic “Take Me for a Ride” is a spellbinding introduction to Canty’s new music, in which poetic lyrics and haunting melodies abound.
•       My new album Motel Bouquet comes out this spring. Releasing this record feels like a sigh after a long haul, and it feels like lighting fireworks in the front lawn.
•       In the winter of 2015, I packed up my old red car in snowy Vermont with guitars and far too many houseplants and drove south on a hunch that Nashville was the right place for me and my music. Not two years later, I found myself recording my songs with some of Nashville’s finest.
•       In skipping to the end of the story; recording in my new hometown with a brilliant band, I’m breezing over the years where I cut back and uprooted my life, started from scratch in a new part of the country, worked to make a home, grow a garden and find my community. And skimming over the part where I toured like mad and wrote these songs on airplanes, in motels, backstage, on porches, in my garden, and at my kitchen table. That story is in the songs — the struggle, sorrow, and the light breaking back in.
•       Noam Pikelny produced Motel Bouquet and played guitar, Stuart Duncan played fiddle, Paul Kowert played bass, Jerry Roe played drums, and Russ Pahl played pedal steel. We recorded live over three days here in Nashville. Aoife O’Donovan sang harmony and Gabe Witcher added fiddle to few tracks as well.
•       I couldn’t be happier with this record — the way it sounds, and the way it went down. Every bit of this session was fun, felt natural and easy and exciting. Making music with this band made me fall in love with making records again.
PREORDER MOTEL BOUQUET
•       I’ve partnered with PledgeMusic to offer a preorder of the album. In celebration of its release, I’m including some one of a kind items in addition to the advance copies of CDs and LPs; seeds from my Nashville garden, handwritten lyrics, signed set lists from the release tour, and my guitar strings from the recording session (for the sentimental types). If you have any questions or want to add something to the store, please shoot me an email —
•       Letter: When you preorder Motel Bouquet you’ll get the music first, ahead of the release. The AccessPass comes with every purchase and includes the digital download of the album, exclusive updates from me, track premieres, stories behind the songs, and new videos.
•       And by preordering the record, you help it make a bigger splash on release day and give it a better chance of getting heard. This record is about to set sail on a loud ocean of news and noise, and I am so grateful for each and every flare that someone lights up for it.
•       I can’t wait for you to hear it. And I hope to see you out there.
x
Caitlin
Career:
•       After college, Canty moved to New York City, where she was hired as the first employee of Live from the Artists Den, and later worked as a sustainability consultant. During this time she recorded her first album in her makeshift home studio, and an EP coproduced by the band Darlingside, both of which were out of print as of 2015. After five years working full~time and playing solo shows or singing backing vocals in New York clubs including Rockwood Music Hall and The Living Room, Canty quit her day job in order to pursue music full~time. Her 2012 album, Golden Hour, was recorded with her trio (Hans Holzen on lap steel and guitars, and Kyle Kegerreis on upright bass) and members of Darlingside in Portland, ME. Reckless Skyline was recorded over four days at Sonelab in Easthampton, MA. It includes 11 original songs and a cover of Neil Young’s “Unknown Legend.”
Author: Brittney McKenna, https://www.rollingstone.com/
Website: https://www.caitlincanty.com/
Twitter: https://twitter.com/caitlincanty
Facebook: https://www.facebook.com/caitlincantymusic
Bandcamp: https://caitlincanty.bandcamp.com/track/dotted-line
Discography:
•       2007 “Green” (Out of print)
•       2010 “Neon Streets” (Out of print)
•       2011 Down Like Silver (with Down Like Silver)
•       2012 Golden Hour
•       2013 Light That Match (with Down Like Silver)
•       2015 Reckless Skyline
•       2016 Lost in the Valley 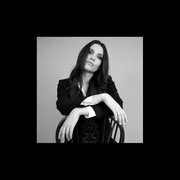