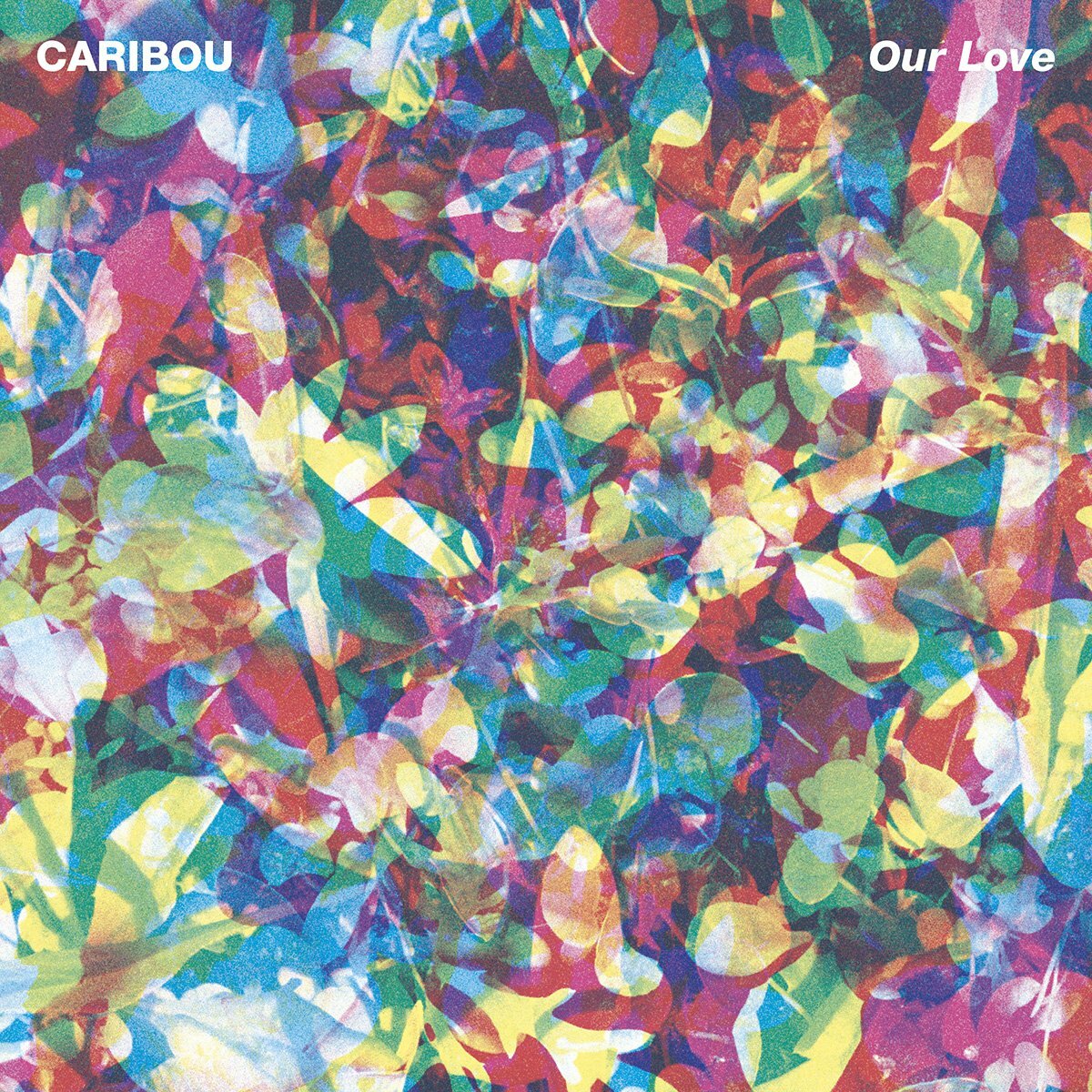 Description:
η   Our Love is formed around a mixture of digital pop production, hip hop~inspired beats, muted house basslines, and a love of shuffling garage that can be traced all the way back to the time of Start Breaking My Heart — all of which are, of course, filtered through Dan’s own unique perspective. The warm analog sounds of classic soul should not be overlooked either, for they weave themselves most intensely into the record’s DNA. In fact, Our Love is probably Caribou’s most soulful record to date, with tracks like “Back Home” whose heartfelt lyrics — dealing in tired relationships and a weary kind of love — and organic nature cut through the bubbling synths and blissful euphoria of their synthetic constructions. It’s not all downbeat of course; while some thoughts linger on mortality, loss, and letting go, there is always an element of celebration.
η   Having followed up his Polaris Prize~winning 2007 record Andorra with the universally adored Swim in 2010 (selling nearly 175,000 copies worldwide and being named Album of the Year by Rough Trade, Mixmag, and Resident Advisor while also hitting The Guardian, Pitchfork, Spin, and Mojo’s Top 20), Dan has spent the intervening four years touring the world, bringing not only the sounds of Caribou to the stage but proving his immeasurable worth as a DJ with epic 71~hour~long sets. In 2012, Caribou were personally invited to join Radiohead on the road while Dan released his first album under the guise of his dancefloor~loving pseudonym Daphni to widespread critical acclaim. Following the shape~shifting sounds of JIAOLONG and the brightly textured, fluid constructions of Swim — both inward~looking records in their own way — Dan withdrew to the basement once more to work on Caribou’s next opus.  Only he didn’t: Our Love isn’t the sound of isolated creation but the sound of Dan at his most connected — with love for his listeners, his collaborators, and those closest to him.
REVIEW
By David Welsh | posted on 30 Sep 2014 | Score: ****½
η   Dan Snaith is on something of a roll. In the seven years since second Caribou album Andorra scooped the Polaris Music Prize, he’s garnered gushing critical acclaim on two separate occasions. His Swim LP, released in 2010, seemed to define an entire summer and set the standard in electro~psychedelia; 2012’s Jiaolong — a homebrewed album attributed to his alternative moniker Daphni — was similarly well received, its palette of joyous, rootsy house sounds at odds with that year’s “EDM barfsplosion”. We now catch up with Snaith as he attempts to join the dots between blissful shoegaze and thudding electronica; a feat he has managed so handily in the past. A rehash would not suffice, though, for the acclaimed Ontarian musician–producer — he simply set the bar far too high for that.
η   Happily, Our Love feels like it delivers; feel being the operative word in an effort tinged with soul from beginning to end. Can’t Do Without You — released for free in June — clasps listeners’ hands as they pass through the starting gate. A scratchy sample repeats the track’s refrain as a perfectly measured crescendo takes shape.  Understated~yet~muscular percussion and bass kick in after a minute~and~a~half, and layered vocals — reverberating falsetto and modulated baritone — point the way to a closing cacophony that can only be described as exhilarating.
η   Having delivered eight~hour sets as a DJ, it’s no surprise that Snaith observes the time~honoured mix~tape trope of starting hard before easing off: Silver does just that, its rich, skittering soundscape melting away the four years since Swim’s release. Signature Caribou style, complete with a James Blake~like vocal delivery, settles like mist over the mix, and a chord~switching coda brings to mind the loaded futurism of 10,000Hz Legend~era Air.
η   So far, so good, and the momentum continues with All I Ever Need — which echoes SBTRKT‘s phenomenal Hold On — before the title track (and lead single) steals the spotlight. Its glitchy, Dabrye~like opening extrapolates into something altogether excellent: high hats and subtle strings evoke ’90s house music, a dirty bassline even bringing Inner City‘s Good Life to mind. Dive rounds out the album’s first half by exhibiting the other side to the Caribou coin, its two~minute delve into ambient post~dubstep (yes, that’s a thing) caressing the listener’s senses.
η   Pacing, perhaps unsurprisingly, proves to be no problem. The bright, delicious, slightly off~kilter swagger of Second Chance — featuring Jessy Lanza — is arguably the closest Snaith comes to chart territory, though he resists the temptation to crescendo; he instead alludes to the idea, its implied existence paying off in spades. Mars makes a similar virtue of patience, its long percussive precursor gradually augmented by flute licks and subsonic bass. Chord~pedal tones lend track some emotional resonance, but not until its closing passage.
η   The stage is then set for Our Love’s closing pair, which turn out to be a little less accessible than their preceding trackmates. The realization dawns that the LP has been relatively obstruction~free to this point — pulsating lights and irresistible beats at every turn — before Snaith decides to throws up a roadblock or two, asking more of his audience. Back Home in particular stands out as love~weary and soul~bearing (“Where did it all go wrong? / What it is is what we’ve chosen”). Menacing minor chords intimate intimacy, and a beautifully~fuzzy finale hints that this is what we’ve been heading towards all along. It’s a smart, attentive~demanding progression — within the song and throughout the album as a whole — that deftly captures various stages of love’s cycle. With added synths. Fortaken: http://www.musicomh.com/

REVIEW
Alexis Petridis, The Guardian, Thursday 2 October 2014 15.29 BST
η   Caribou — Our Love review: spellbindingly ambiguous, endlessly fascinating electronica.
η   Dan Snaith reckons his latest Caribou album is mind~numbingly simple — but that does a great disservice to this beautifully strange, subtle music.
η   Dan Snaith has described his seventh album as both “mind~numbingly simple” and “something for everybody to listen to”. These are phrases almost guaranteed to give his fanbase pause: over the course of his career — first under the name Manitoba, then as Caribou — Snaith has never previously given the impression of being terribly interested in mass appeal. An expat Canadian, he started out making complex laptop electronica that variously referenced British psychedelia, bedsit singer–songwriters, the output of Warp records, krautrock and shoegazing indie. The fact that he did it while studying for a doctorate in pure mathematics at Imperial College London sealed his image as an austere, cerebral figure, even by the standards of laptop electronica producers — not a subsection of the popular music world renowned for its outrageous flamboyance. He scored his first record deal while working at Hewlett Packard’s research facility in Bristol. A teetotaler, he professed to while away time on tour by inviting people on to his bus to give him and his backing band “guest lectures” on topics including the transistor radio and Marxism. If you look online, you can find his thesis: “Chenevier defines overconvergent p~adic automorphic forms on any twisted form of GLn/Q compact at infinity chomologically by embedding classically constructed irreducible representations of GLn/(Qp) in certain infinite dimensional p~adic Banach spaces,” it opens, but, be warned, it’s not all as straightforward and easy for the layman to grasp as that.
η   As his music gradually shifted its focus from the bedsit to the nightclub, Snaith defined it in opposition to the dance mainstream. Last year, he put out a collection of the DJ~friendly productions and remixes he’d been releasing to vast acclaim under the name Daphni: a track like Ye~Ye already had a proven track record of moving dancefloors, but Snaith insisted it was music for “a small world where dance music lives up to its potential to liberate, surprise and innovate”. It was nothing to do with “the mind~numbing predictability of the EDM barfsplosion currently gripping the corporate ravesters,” he added, presumably for the benefit of anyone tending to get an anonymous-looking Canadian with a doctorate in overconvergent Siegel modular symbols confused with Skrillex.
η   And yet, here he is, blithely announcing that his new album has been inspired by hearing that Caribou’s 2010 track Sun was big in Ibiza. In fairness, there’s a sense in which you can see what he means. You could just about imagine his collaboration with vocalist Jessy Lanza, Second Chance, becoming a breakout hit from this new album, albeit in an alternate universe where radio programmers and music buyers alike are unbothered by the fact that the synthesisers in the background keep swaying out of tune with the lovely melody to unsettling effect. Elsewhere, the album draws on the same areas of musical history that have inspired chartbound dance acts in recent years. You can hear echoes of old deep house tracks in the warm textures of All I Need, while the chopped~up and looped snatches of vocal recall UK garage, and the title track features a mid~section that wouldn’t sound out of place on an early~90s hardcore record and a synth part that’s fairly obviously a homage to Inner City’s 1988 classic Good Life.
η   But while artists such as Disclosure alight on the pop aspects of their source material, Snaith is audibly interested in subtlety and uncertainty. For all his perfect grasp of the kind of dynamic shifts that cause pandemonium on dancefloors — the sudden flurries of euphoric strings on the title track, or the moment, three minutes into Can’t Do Without You, when the whole track is consumed by fizzing electronics — there’s something spellbindingly ambiguous about the music on Our Love, heightened by the fact that Snaith foregrounds his own vocals, which are fragile and introverted: he often sounds like a man singing to himself. Can’t Do Without You starts out as a profession of undying love, but as it progresses, the vocals become increasingly wreathed in echo, the bassline distorts, the track becomes more and more overcrowded with sound, and you’re struck by the sense that the undying love in question might be a little obsessive and creepy. The relentless percussive battery of the instrumental Mars gives every impression of heading to some kind of ecstatic climax, but the big drum roll is followed by an unexpected drop in temperature: it suddenly sounds brooding and chilly. The closing Our Love Will Set You Free has all the ingredients of a euphoric anthem — a gorgeous melody, a nagging hook, more strings, snatches of funk guitar, a suitably uplifting sentiment in the chorus — but the whole thing feels strange and sickly: the sound is thin and it phases in and out, as if it’s being played off an old, damaged cassette.
η   You leave Our Love a little baffled as to how Snaith came to the conclusion that this was “mind~numbingly simple” music: if it’s not complicated in the overconvergent Siegel modular symbols sense, one of the things that makes it so compelling is its ambiguity — the feeling that you’re never quite sure where it stands. That may doom it as “something for everyone to listen to”. A glance at the Top 40 suggests that what people currently want is something straightforward, and Our Love is anything but. This is rich, strange, endlessly fascinating music: a subtle, beautiful triumph.
Fortaken: http://www.theguardian.com/
Label: http://www.mergerecords.com/our-love