Born: David Keith Lynch, January 20, 1946, Missoula, Montana, U.S.
"My childhood was elegant homes, tree-lined streets, the milkman, building backyard forts, droning airplanes, blue skies, picket fences, green grass, cherry trees. Middle America as it’s supposed to be. But on the cherry tree there's this pitch oozing out – some black, some yellow, and millions of red ants crawling all over it. I discovered that if one looks a little closer at this beautiful world, there are always red ants underneath. Because I grew up in a perfect world, other things were a contrast."
David Lynch

Most know David Lynch as one of cinema’s most original talents, but he is also a prolific visual and musical artist whose boundless creativity spills over into the realms of painting, photography, songwriting and more. He moved to Los Angeles in 1970 to study filmmaking at the AFI Center for Advanced Film Studies. During his time there, Lynch began working on what would become his first feature, Eraserhead. Lynch has since received three Academy Award nominations for Best Director, for his films The Elephant Man (1980), Blue Velvet (1986), and Mulholland Dr. (2001) as well as the Palme d'Or at the Cannes Film Festival for Wild At Heart, a Golden Lion award for lifetime achievement at the Venice Film Festival for and France's Cesar Award for Best Foreign Film for The Elephant Man and Mulholland Dr. Crazy Clown Time, marks Lynch’s solo debut as a musical artist. Due out November 8, the album’s 14 original songs were written, performed and produced by Lynch, who is a self-taught “non-musician.”  Sunday Best Recordings/Pias America //

DAVIDLYNCH.COM
NPR Music: http://www.npr.org/2011/10/30/141598329/first-listen-david-lynch-crazy-clown-time
If any movie director is as well-known for his sound design as for his camera work, it's David Lynch. The surrealist auteur behind Blue Velvet, Mulholland Drive and Eraserhead represents such a distinct sensibility that he's earned his own adjective — Lynchian — to describe his signature juxtaposition of the phantasmagorical and the mundane.
Lynch has injected this sensibility into his entire oeuvre — which includes everything from painting and photography to a daily weather report and a Parisian nightclub — and his musical collaborations are no exception. For decades, he's worked with composer Angelo Badalamenti on his scores, like the masterful soundtrack to the noir TV show Twin Peaks. Alternately employing lush synths and goofy smooth jazz, the pair also rendered uneventful scenes nerve-wracking by undercutting them with a low drone. More recently, Lynch sang with Danger Mouse and Sparklehorse on the Dark Night of the Soul compilation. So, while Crazy Clown Time might be a debut album from a new artist, it's not without certain expectations.
To those familiar with these tendencies, the content of Crazy Clown Time should come as no surprise. Written, performed and produced by Lynch with engineer Dean Hurley, Lynch's first solo album finds him meandering through a series of dark dreams and visceral meditations on modern life and society. Karen O of the Yeah Yeah Yeahs supplies guest vocals for the opening track, but otherwise Lynch is front and center.
When it comes to the music, he stays inside a few heady realms of exploration: moody electronic dance beats, yowling blues slide guitar and a heavy use of delay, thick reverb and slow, creeping chord progressions. The first single, "Good Day Today," bumps along with pulsing polyrhythms. Later, that familiar drone returns, this time mixed with sound effects of rain, sirens and a moaning woman. Other tracks play it vampy and languid, laying back to let "Wicked Game"-style guitars set the scene. They're songs that Lynch's characters might dance to late at night at his club Silencio.
But the true Lynchian effect lies in the vocals. His voice takes on a different type of distortion for each song: whispered harmonic layers in "She Rise Up," a high-pitched warble for "Crazy Clown Time." This title track, perhaps the most frightening song on the record, describes a nightmarish backyard party told from the perspective of a childlike observer. While all of this might sound a bit oblique, fans looking for a concise summary of Lynch's worldview won't get much closer than "Strange and Unproductive Thinking." Over a groove that's like "Stuck in the Middle With You" on codeine, Lynch's robotic monotone muses about everything from spiritual enlightenment to tooth decay.
It sounds absurd, yes, and Crazy Clown Time — out Nov. 8 — won't be for everyone. But you can be sure that no two people will come away with the same experience of this record, and there aren't many artists working today who can make that claim.

Barry Thompson:
Psychically separating Crazy Clown Time from David Lynch's peerless filmmaking legacy is sort of like guzzling Lynch's signature brand of coffee until overstimulation compels you to write Twin Peaks fan-fic erotica staring Agent Cooper and the Log Lady, and all the while telling yourself these actions do not co-relate. On Lynch's foray into experimental electro-pop, memorable scenes sporadically pop out of a sprawling, suave, stylish dreamscape where, a lot of the time, not much seems to be happening. In other words, it sounds like a movie he could have made. At intervals — such as the shadowy "Pinky's Dream" (beauteously belted out by Karen O of the Yeah Yeah Yeahs, or the elegantly pensive "These are My Friends" — Lynch achieves the darkly engrossing hypnotism of Mulholland Drive. The title track — a swampy, tedious barrage of shrill non-sequiturs documenting a cretin soiree — sucks for the same reasons Inland Empire sucked. But overall, Crazy Clown Time can be aptly compared to Lost Highway (which has an amazing soundtrack featuring songs written by people other than Lynch). It's kind of cool, kind of confusing, and kind of boring.
By BARRY THOMPSON  |  November 2, 2011
David Lynch | Crazy Clown Time"
2.5 Stars / Taken from: http://thephoenix.com/Boston/music/129184-david-lynch-crazy-clown-time/ 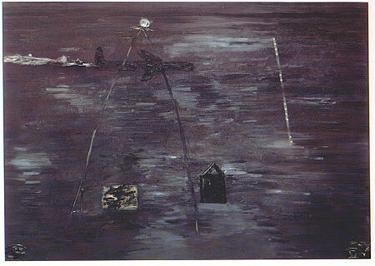