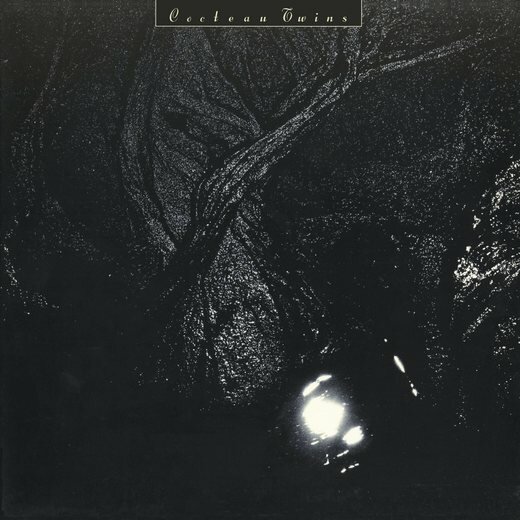 Description:
♣   Following last year’s represses of Cocteau Twins’ Blue Bell Knoll and Heaven or Las Vegas, this July will see their combined EPs of Tiny Dynamine / Echoes In A Shallow Bay and long out of print, early–80s compilation, The Pink Opaque, officially released on 17th July.
♣   With a history of releasing singles between albums, the two EPs of Tiny Dynamine and Echoes In A Shallow Bay were originally released two weeks apart back in November 1985.  Seen as companion pieces, they acted as a precursor to their fourth studio album, Victorialand.  30 years later, they’re now being married together on to one piece of vinyl, completed with reformatted artwork.
♣   A year later The Pink Opaque was compiled to bring together the best of the Cocteau Twins’ early works to become the band’s first official release in the US.  Already a cult band on college radio, some classics like ‘Pearly–Dewdrops’ Drops’ and ‘Aikea–Guinea’ were given new mixes for this release, while it’s noted for also featuring ‘Millimillenary’, the first run out for incoming band member Simon Raymonde.  To this day, it remains a great entry point to a wonderful band.
♣   Using new masters created from high definition files transferred from the original analogue tapes, both these albums will receive 180g vinyl pressings this July.  HD audio downloads of both albums will be made available through specialist retailers at the same time.

Review by Ned Raggett.
♣   After having built up a considerable reputation in the U.K. and Europe, the Cocteaus first fully reached America via this compilation, cherry–picking some of the group’s finest moments for this trans–Atlantic co–release between home label 4AD and then–stateside label Relativity. None of the ten tracks had been released in America before, but whoever assembled the release knew exactly what they were doing in terms of whetting appetites. The only absolute rarity on the disc was “Millimillenary,” originally turning up on a compilation tape given away by New Musical Express. It’s a fine number, recorded soon after Raymonde joined the group — a good mix of the Cocteaus’ instrumental lushness and Fraser’s vocal acrobatics. The version of Garlands’ “Wax and Wane” included here is slightly remixed and arguably even better than the original, bringing out everything a little more clearly and powerfully. A sage decision was the inclusion of all three tracks from the Pearly–Dewdrops’ Drops EP; as flawless as that was, all deserved inclusion, while beginning the compilation with “The Spangle Maker” was also inspired. Other cuts include “Hitherto,” “From the Flagstones,” “Lorelei,” and the then–recent single “Aikea–Guinea.” Concluding with the similarly album–ending “Musette and Drums” from Head Over Heels, The Pink Opaque is a lovely taster for anyone wanting to discover the peerless early years of the Cocteaus.
Tiny Dynamite:
Review by Stewart Mason.
♣   Originally, Tiny Dynamine and Echoes in a Shallow Bay were released as a pair of EPs in similar covers within a few months of each other in 1985; the songs were actually recorded during the same sessions, but the band wished to release them without the hoopla of a full album. This was probably a wise decision, as listening to the two EPs together on one CD, it’s clear that these eight songs are a step down in quality from the inspired heights of Head Over Heels and Treasure. There’s not much difference in sound between songs like “Pink Orange Red” and earlier gems like “Five Ten Fiftyfold,” but there’s a certain ethereal quality lacking in these recordings, a tiredness that suggests the Cocteau Twins had taken their early sound as far as they could go. (Unsurprisingly, their next release, 1986’s Victorialand, was a complete departure.) That said, the Cocteau Twins’ early sound was amazingly cool, and although they’re lacking in invention, the thick atmospherics and swirling vocal melodies of their earlier records are here in spades. As background music, Tiny Dynamine/Echoes in a Shallow Bay works a treat; it’s only when one pays closer attention that the disappointment sets in. ♣   | http://diffuser.fm/

£17.99|$16.49
ABOUT:
♣   When they first emerged in the early 80s, the Cocteau Twins were compared most often to Siouxsie & The Banshees, but in truth they never sounded like anyone — or anything — else. Taken together, their nine albums, and sixteen EPs/singles, sound less like a band and more like an element of nature.
♣   Which was very 4AD. Ivo Watts–Russell has always claimed that his aim was to unearth music that was timeless, free of any trend, movement or era and even in their earliest incarnation, the Cocteau Twins were true to that remit, firmly charting their own course. The band’s name was plucked from an old Simple Minds track, but the foundations were laid some time before, when old school friends Robin and Will saw Liz dancing in a disco. In a stroke of precognitive genius, the boys decided that if Liz could dance that well, then she should be able to sing that well, too.
♣   Some time later, Robin’s chance meeting with early 4AD signings The Birthday Party resulted in a tape being sent to Ivo, who was thrilled by what he heard, and encouraged them to record more. Plans for a debut single were shelved, and the stark, mercurial Garlands appeared instead. Describing it as “haunting”, “spellbound”, “diaphanous”, and discerning a “frosting of sweetness”, the critics wore out their adjective; this was rock music — just — but it was conjured in the unlikeliest environment from the strangest of material. They stayed a trio, with a drum machine on board, so preserving their tightly knit, private world. In fact, that world was diminished rather than expanded when, after two EPs and a European tour, Will Heggie left, leaving Robin and Liz, by then a couple, to carry on as a duo. The pair recorded the Head Over Heels album and the Sunburst And Snowblind EP in 1983. On these recordings, Liz could be heard forming her own language — recognisable words emerging and submerging in a maelstrom of her own, coated and drowned in Robin’s swelling guitar. Bass player Simon Raymonde, formerly of The Drowning Craze, joined the band at the end of 1983.

♣   A trio again, the band recorded The Spangle Maker EP, which included the majestic ‘Pearly–Dewdrops’ Drops’, their first Top 30 hit. With Simon on board, the band developed bottom end, deeper eddies and currents, but an increased lightness of touch, too. They were evolving with each release, with Liz especially pushing herself further and further. Back in the studio, 1984’s Treasure brought more layers of ornateness, opaqueness and stateliness to the band’s sound. This time, Liz’s songtitles were names: not just ‘Lorelei’ and 'Pandora’, but 'Ivo’, 'Persephone’ and ‘Aloysius’ too. Liz, in her naivety, never considered that people might put those titles and the album cover (all lace and shadows) together, and came up with the ‘fey Victoriana’ tag that the trio came to hate. Despite this sort of misinterpretation, the music continued along its own resolute path, through three EPs in 1985: Aikea–Guinea, Tiny Dynamine and Echoes In A Shallow Bay. Each one signalled a move towards an increasingly abstract ‘floating’ sound — a move that culminated in Robin and Liz (minus Simon) recording the largely acoustic, non–percussive Victorialand.
♣   The Cocteaus re–emerged 12 months later with Blue Bell Knoll, which was warmer and lusher than ever, but more concentrated and concise too. This progression was even more marked with 1990’s Heaven Or Las Vegas: an audible release of tension and a surge of unfettered love that is many people’s favourite Cocteaus album. Heaven Or Las Vegas was also the last record the Cocteau Twins made for 4AD. They’d been part of the family for years, helping to define what the press used to call the "4AD sound", and it’s almost always the way that family members must at some point leave the nest. The die was cast, and they departed for Fontana, releasing two more albums (Four Calendar Café, and Milk And Kisses) before disbanding in 1996. Four years later, the 4AD retrospective Stars And Topsoil served as a reminder of the trio’s uniquely bewitching music.