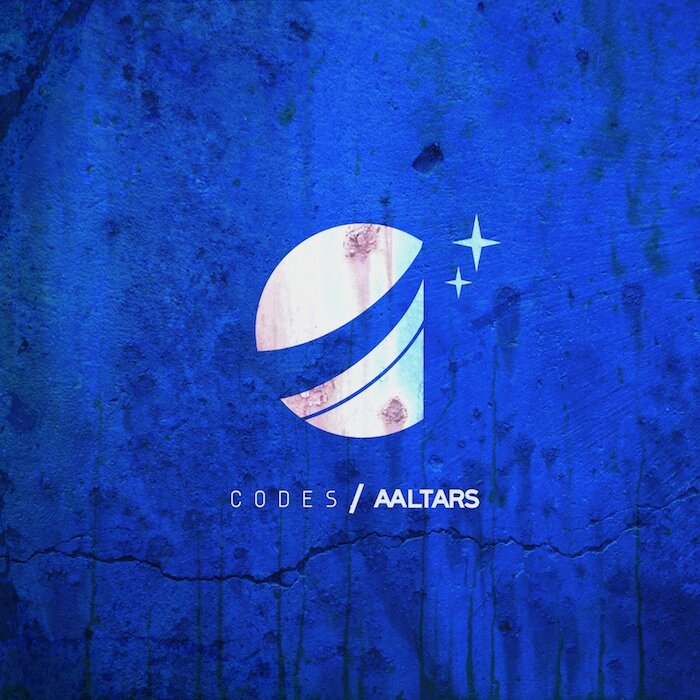 •   Complex, aggressive and urgent. Explores elements of electronic percussion, urban synths, and glitchy guitar riffs — while still retaining the meticulous ear for melody and detail that are at the heart of everything the band strives to do.

© Phil Udell. January 5th, 2015
Recommended if You Like: Everything Everything, Mew, Muse
Location: Dublin, Ireland ~~ London, UK
Album release: September 18th, 2015
Record Label: Codes
Duration:     51:15
Tracks:
01. Outposts      4:07
02. And Arrows and Aarrows      3:13
03. Astraea      2:56
04. Velia / Oceans      3:57
05. Triangulum      4:55
06. Levitate      3:49
07. Sleepingthroughwinter      4:38
08. Bleed Blue      5:55
09. I Thought of Mountains      3:08
10. Shapeshifter      3:45
11. Irya (D)      2:25
12. Meridian Square      4:55
13. (Ninth)      3:25
Personnel:
•   Daragh Anderson (Vocals, Guitars, Samples)
•   Eoin Stephens (Bass, Vocals, Synth)
•   Raymond Hogge (Guitars, Vocals, Piano, Synth)
•   Alex (Drums, Vocals, Samples)
Past:
•   Niall Woods (Drums, Percussion, Samples, Vocals)
Album Notes
•   The second studio album from Codes.
•   The self–produced, independently released sophomore effort from Codes was recorded in the band's studio space in London and between Modern World Studios, Gloucestershire and Roundhead Studios in Auckland New Zealand where it was mixed and edited by Clint Murphy (Manic Street Preachers, 50 Cent) and finally mastered by Ryan Smith (Battles, Nada Surf, AC/DC) at Sterling Sound in NYC.
•   The album, which was made possible by a successful online fan–funding campaign, showcases the band’s conscious stylistic departure from their debut. Having this complete creative freedom allowed the band to make something truly different.
AALTARS is a more complex, aggressive and urgent work — exploring elements of electronic percussion, urban synths, and glitchy guitar riffs — while still retaining the meticulous ear for melody and detail that are at the heart of everything the band strives to do.
•   Following an extensive period of writing and recording in London, Codes return with ‘AALTARS’, their sophomore release to the Choice Music Prize Nominated debut ‘Trees Dream in Algebra’ .
•   “Akin to 65daysofstatic in their visceral appeal, the band manage to sprinkle just a tiny piece of sugar on top to sweeten the blow.” — CLASH Magazine.
•   Since the release of the group’s debut album ‘Trees Dream in Algebra’, Codes have appeared at almost every major Irish music festival, opened for acts such as Keane and The Airborne Toxic Event, and headlined shows across both Ireland and the UK.
•   For the past 3 years the group have been based in London writing and recording the body of work that would become ‘AALTARS’.
•   Followers of the band have already been treated to previews of what’s to come with the singles ‘ Astraea’ and ‘Levitate’, along with a live version of fan favourite ‘Triangulum’. The tracks showcase a conscious departure from the style heard on ‘Trees Dream in Algebra’ but they still retain the thoughtful structures and infectious melodies that are unmistakably the core of Codes.
•   ‘AALTARS’ is scheduled to be released on 18th September and will be available digitally from all good online stores and in physical version at live shows.
Website: http://www.codes.ie/
Twitter: https://twitter.com/codesofficial
Soundcloud: https://soundcloud.com/codesofficial
CD Baby: https://www.cdbaby.com/cd/codes13
Facebook: https://www.facebook.com/codesofficial
Press: