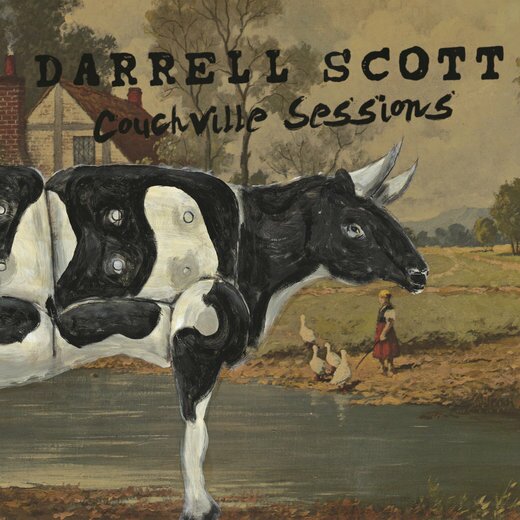 Darrell Scott — Couchville Sessions (May 13, 2016)
•   A country songwriter and a multi–skilled musician adept on guitar, dobro, banjo, and several other instruments.
Born: August 6, 1959 in London, KY
Location: Nashville, TN
Genre: Americana, country, singer–songwriter
Album release: Friday 13 May, 2016
Record Label: Full Light Records
Duration:     59:26
Tracks:
01 Down to the River     4:15
02 Waiting for the Clothes to Get Clean     4:42
03 It’s Time to Go Away     3:13
04 Big River     3:27
05 Love Is the Reason     3:13
06 Ramblin’ Man     6:46
07 It’s About Time     4:25
08 It’s Another Day     5:14
09 Moonlight Midnight     5:14
10 Morning Man     4:40
11 Come into This Room     4:00
12 Loretta     2:56
13 Another Grey Morning     4:05
14 Free (This Is the Love Song)     3:14
Credits:
•   Richard Bennett Guitar
•   Blue Mother Tupelo Vocals
•   Jamie Bridges Engineer
•   Guy Clark Spoken Word
•   Shad Cobb Fiddle
•   John Cowan Vocals
•   Richard Dodd Engineer
•   Dan Dugmore Guitar, Lap Steel Guitar, Pedal Steel, Piano
•   Jason Eskridge Vocals
•   Eric Fritsch Engineer
•   Stephanie Hudacek Engineer
•   Erick Jaskowiak Engineer, Vocals
•   Yvette Landry Triangle, Vocals
•   Kenny Malone Drums, Percussion
•   Mike McGooldrick Uillean Pipes, Whistle
•   Bill Payne Keyboards, Organ, Piano
•   Dirk Powell Accordion, Banjo, Fiddle
•   Peter Rowan Vocals
•   Angela Scott Vocals
•   Darrell Scott Bouzouki, Editing, Guitar, Liner Notes, Mandolin, Photography,  Producer, Vibraphone, Vocals, Weissenborn
•   Lauren Tyler Scott Vocals
•   Jeff Sontag Engineer
•   Dave Stewart Cover Photo
•   Danny Thompson Bass (Upright)
•   Chris Weller Design
•   Miles Wilkinson Engineer
•   Andrea Zonn Vocals
REVIEW
BY STEVE HOROWITZ, 13 May 2016;  SCORE: 7
AS A PRESERVATIONIST, SCOTT UNDERSTANDS HOW TO TREASURE RESOURCES.
•   Sustain–ability
•   Country singer–songwriter Darrell Scott takes sustainable living seriously. He uses wood for heat, the sun for power, and grows his own food on his home on the Cumberland Plateau, outside of Nashville. In fact, the word sustainability is the first one listed in his biography on his website, www.darrellscott.com/bio. Except he spells it “sustain–ability”. That’s how seriously he takes it; he chews each side of the conjunction to show its individual importance and relationship to each other.
•   The songs on Scott’s new album were recorded in his living room during 2001 and 2002 and feature the playing English multi–instrumentalist Danny Thompson and Nashville musicians drummer Kenny Malone and guitarist Dan Dugmore. The homemade process endows the music with a comfortable, downhome feeling. Even when there is virtuoso picking, the riffs seem playful. Scott took the tapes to Bill Payne to master in 2015, and now more than a dozen years later the music is available. Payne allegedly performed his magic in the living room of Scott’s new domicile.
•   Now one can’t quite call this composting. That would require breaking down the old tracks. But one really can’t call this a new crop of tunes either. In any case, it does reveal Scott’s consistency. Most of these decade plus year old songs, both originals and covers, resemble his more recent output in terms of sound and quality. Ironically, the most dated cut is a Scott original called “It’s About Time”. It’s squeaky clean acoustic arrangement recalls past countrypolitan styles of another era. The cutesy lyrical wordplay and Scott’s affected vocals seem out of place here, among a funereal version of Hank Williams’ “Ramblin’ Man”, a melancholy treatment of Townes Van Zandt’s “Loretta”, and a somber take on James Taylor’s “Another Grey Morning”. Every song doesn’t have to be sad, but they cannot be facile.
•   Scott does offer some fine happy moments. The opening cut, “Down to the River”, celebrates the diversity of friends who sing together soulfully only to be criticized by the music police for not sticking to one genre. The magic realism of this tale goes from fanciful to the nitty gritty without ever losing direction. The band plays loose and free to capture the mood and Scott even yodels off–key to emphasize that being crazy has its merits. The song ends with a wooly Guy Clark narration that seals the deal. And the album contains more serious depictions of life, such as the character study of a woman and her abusive boyfriend, “Waiting for the Clothes to Get Clean”. The sketch strongly captures the pathos of such a relationship without being cloying. The simple, mantra–like melody suggests how we fall into patterns without knowing we are falling into a trap until it is too late.
•   Other self–penned tracks like “Love Is the Reason”, “Morning Man”, and “Come Into This Room” offer proof of both Scott’s songwriting talents and his singing to set a mood and hook an audience. The band just falls into the groove and subtly reveals their talents.
•   As a preservationist, Scott understands how to treasure resources. Putting out 15–year–old material with a good band and just a minimum of reprocessing fits in with his lifestyle and behavior, and we are all the better for it. •   http://www.popmatters.com/
Website: http://www.darrellscott.com/
Twitter: https://twitter.com/darrellscott
Facebook: https://www.facebook.com/darrellscott
•••••••••••••••••••••••••••••••••••••••••••••••••••••••••••••