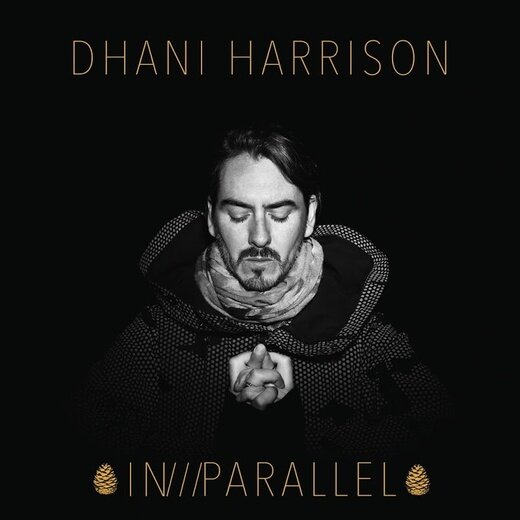 © Dhani Harrison at the Echo, July 24, 2017. Photo credit: Michelle Shiers
Review
TOM MOON, September 28, 2017. 5:00 AM ET
•    After years of collaborations, the son of The Beatles’ George Harrison is finally releasing his solo debut.
•    Pop culture sells the idea that the human aptitude for art is instant, a birthright. Those who toil in this realm know better: It’s a journey. Making art involves understanding the nature of inspiration, managing influences, building skills, locating kernels of truth within oceans of static. It takes time.
•    Which perhaps explains why Dhani Harrison, age 39, is just now releasing his first solo album, the mesmerizing In///Parallel.
•    Of course, the son of the late George Harrison has been involved in music for a long time. His band thenewno2 began making music in 2006, and within a few years was playing Coachella and other festivals. He’s done soundtracks for film and TV (Beautiful Creatures, Good Girls Revolt). He’s also worked as co~producer (with Jeff Lynne) of his father’s Grammy~winning posthumous release Brainwashed, and played guitar in highbrow company (memorably, “While My Guitar Gently Weeps” during a 2004 Rock and Roll Hall of Fame tribute to his father, featuring Prince, Tom Petty and Steve Winwood).
•    What Dhani Harrison hasn’t done, until now, is share his own musical vision, the sound he hears in his soul. His path has been about acquiring skills, learning musical languages — and, not incidentally, wrestling with the long shadow of a much~beloved and iconic parent.
•    Harrison could have done the George tribute circuit forever. Instead, he went searching for what he alone might contribute to the ongoing conversation of rock; In///Parallel announces the arrival of an unexpectedly intense artist, whose mission is to tell stories not just with words but cannily developed sonic realms that suggest Can, Pink Floyd and Peter Gabriel.
•    It takes seconds to sense this. The opener “Never Know” begins with the recollection of a dream, scrambled and out of linear sequence. “When the breath was taken from me I was screaming,” Harrison sings in a faraway, disoriented way, his words made eloquent by the sitar~kissed drone that surrounds him. “In the dream their queen had stolen all my reason ... We were subject to the tussles of our feelings. Good and bad, day or night, rain or snow, all we knew was high and low.”
•    It’s a song about destiny and choice, and like much of the album, it connects meditation~room insights to vast, expansive, post~rock soundscapes. Harrison is a steady~handed songwriter, adept at short and repeatable pop phrases. But his key distinguishing trait is smoldering atmosphere: These songs move at stately, processional tempos but never feel slow — stuff is always swirling in the background. They’re audio landscapes, vivid in an Out Of Africa kind of scenic way, even when they depend on skittering electronic drums and gorgeously sustained guitars that are too ambient to be described as “leads.”
•    “Never Know” features exotic string orchestrations and beautifully arrayed vocals — there are spirited conversational volleys between Harrison and guest vocalist Mereki, and a choral refrain that sounds just a bit like ELO in its heyday. Other tracks utilize different devices: The strings on “The Light Under The Door” take dervish veers into tense dissonance, while “Downtown Tigers” showcases a lovely, unexpectedly moving multi~tracked Harrison vocal.
•    There’s tons to say about the ways Harrison managed and extended the influence of his father. The very occasional (and almost covert) references to The Beatles — see the harmony clusters woven into “Ulfur Resurrection” and the heart~heavy wordless sighs of “Admiral of Upside Down” — resonate as respectful, musically appropriate nods to an inescapable legacy. They’re likely part of Dhani Harrison’s necessary process of discovering his “voice” as an artist, a process that will, with any luck, lead to further explorations along the lines of the thoroughly absorbing music he’s offering here.
•    http://www.npr.org/

© Dhani Harrison at the Echo, July 24, 2017. Photo credit: Michelle Shiers.
AllMusic Review by Stephen Thomas Erlewine; Score: ***½
•    Like other children of the Beatles, Dhani Harrison found himself drawn to music and, like all of the members of this select group, he was reluctant to capitalize on his famous father. He initially solved this problem by burying himself within the confines of thenewno2, a band he formed in 2002, but after a decade of playing with the group, he decided to pursue a solo career. Maybe this 15 years of experience is the reason why 2017’s IN///PARALLEL doesn’t feel tentative in the way so many first albums do. Harrison exudes a quiet confidence, letting IN///PARALLEL unfold surely and steadily, keeping the music meditative and slightly trippy. By some criteria, the circular melodies could be classified as psychedelic, but Harrison’s concerns are in the present, not the past. He layers IN///PARALLEL with all manner of electronics, relying on drum loops and synthesizers to create his darkly alluring pop. While he has hooks, Harrison is less interested in songs than he is in sustaining a mood, which is why IN///PARALLEL isn’t an immediate attention~grabber. Instead, it unfurls slowly, with its melodies sinking into the subconscious on repeated listens — and those listens will happen, because the mood is tantalizing enough to invite a second spin. Far from seeming aimless, the spaciness is controlled: guitars and bass build to occasional crescendos that then fall back to earth, and the prolonged periods of murmuring electronics do not lack texture or tension. It’s this almost cinematic pacing that gives IN///PARALLEL its unique appeal.    •    https://www.allmusic.com/
Review
Dhani Harrison debuts new solo songs at the Echo
KEVIN BRONSON on July 25th, 2017
•    First in line at the Echo on Monday night was a woman not of the headliner’s generation, who had flown to Los Angeles from the Midwest, wearing a T~shirt dotted with Beatles pins that read “Here Comes the Son.” Like the guys with the last name Lennon know, this is what Dhani Harrison faces as he tries to make his own musical way in the world.
•    If there were elevated expectations based on his lineage, they were not met, as Harrison, fronting a five~piece, soldiered through an hour~plus of music that included four songs from his solo debut “IN///PARALLEL,” the first album he will release under his own name and arriving Oct. 6.
•    While not without its highlights, it was an uneven performance, owing to the fact that 1) it was his band’s first live show, 2) persistent problems sent a tech scurrying across stage several times in the middle of songs, and 3)  the setlist itself culled from four different projects in which Harrison has been involved. If you came in search of a chewy nugget that would shed light on the question “Who exactly is Dhani Harrison?,” you walked home wishing you’d heard more of the new album.
•    Nor did the typically genial 38~year~old look entirely comfortable, although he had a bit of fun on the new song “Poseidon (Keep Me Safe).” That song featured a call~and~response between Harrison, his voice vocoded, and Mereki, the L.A.~based Australian who has previously sung with Goldroom, among others.
•    Harrison was backed by guitarist Noah Harmon (The Airborne Toxic Event), keyboardist Josh Giroux (Big Black Delta, Gary Numan), drummer Chris Hornbrook (Poison the Well, Big Black Delta) and bassist Blas Perez (Big Black Delta, among others). Perez got a shout~out from a fan after the electro~rock banger “So Vain,” one of two songs played from 2008’s “You Are Here” by the Harrison~led group Thenewno2. “Gotta love that f*cking bass, man,” the fan shouted, underlining its weight.
•    The band began with the new album’s “Summertime Police,” a burner of a rocker with an outsized beat. Later, “#WaronFalse” revealed an almost~‘90s industrial snarl as it built to bombastic crescendo. And to close out the main set, Harrison played the catchiest of the new material, the first single “All About Waiting.”
•    The three~song encore consisted of “Things Go Round,” a song from the 2010 album by Fistful of Mercy, the trio of Harrison, Ben Harper and Joseph Arthur; “Make It Home” from Thenewno2’s 2012 album “Thefearofmissingout;” and “Yomp” from Thenewno2’s 2008 debut.
•    Harrison dipped into his movie work for two songs — “My Eye” and “Sharp Knife” from 2016’s “Seattle Road” soundtrack.
•    The band’s next gig is Sunday at the Panorama Festival in New York City.
•    Setlist: Summertime Police, My Eye, Timezone, Sharp Knife, Poseidon, #WarOnFalse, So Vain, All About Waiting. Encore: Things Go Round, Make It Home, Yomp.   •    http://buzzbands.la/
Website: http://dhaniharrison.com/
Twitter: https://twitter.com/dhaniharrison
Facebook: https://www.facebook.com/DhaniHarrisonOfficial/
_____________________________________________________________