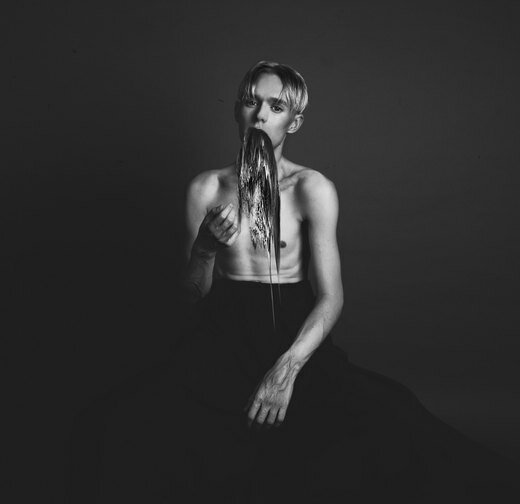 ♠  “Douglas Dare’s music is solitary, passionate and moving. In the stories he tells, the melodies he sings and the conviction he sings them with.” (Rory Foster)      Douglas Dare is a London~based singer~songwriter, originally from the coastal town of Bridport, South West England. The son of a piano teacher, Douglas began composing instrumental music from a young age but it was not until studying popular music at University in Liverpool in 2008 that he began songwriting.
♠  Lyrically I wanted to be as honest as possible. The album deals with so much dishonesty, so I felt the lyrics had to be the counterbalance. I was inspired by Björk’s album Vulnicura and how everything is almost awkward in its honesty. Like my first album, Aforger started as poetry, but I consciously tried to be less poetic. For instance, Oh Father is an example of complete unambiguity. It’s certainly the most personal song I’ve put out there, and the realisation that people may hear it makes me feel very vulnerable. That’s the most real feeling of all for me right now.

© PHOTO CREDIT: Özge Cöne
Location: Bridport, South West England ~ London, UK
Album release: 14 october 2016
Record Label: Erased Tapes Records
Duration:     45:37
Tracks:
01. Doublethink     4:13
02. Greenhouse     3:29
03. Oh Father     3:49
04. New York     4:54
05. The Edge     4:31
06. Binary     5:18
07. Stranger     4:16
08. Venus     3:43
09. Thinking of Him     4:18
10. Rex     7:06
Review
♠  Whelm, the debut album by Douglas Dare, established the London~based musician’s modern classical credentials in the suitably welcoming surroundings of the Erased Tapes label but also came with points of real distinction, most notably in the form of his songs and individual voice. Second album Aforger is an impressive move forward, containing moments of consolidation, but for the most part striking out confidently, reorienting himself musically.
♠  That the album is such a harder~hitting listen than its predecessor can largely be attributed to its origins. Prior to writing the album Dare ended a long term relationship and came out to his father. Both events clearly had a significant impact on him, leading him to question the nature of human  interaction and contemplate the divide between reality and fabrication. This latter point in particular gave rise to the album title of Aforger ~ how someone can construct an alternative life through assimilation.
♠  Opening track Doublethink establishes the theme quickly, drawing from the piano~led sound of his debut but also showcasing the renewed sense of musical confidence that runs through the album. Lines like “ignorance is my bliss” hark back to a time before the personal difficulty that so deeply informs the album had presented itself. The sloping background synths and subtly gyrating percussion of Greenhouse see the album continue in similarly strong fashion.
♠  Oh Father and New York move in more abstract directions, the former striking a darker sound with ominous shudders surfacing in the background. The latter meanwhile sees Dare fall into an abyss of soul searching and anguish asking himself “how can I ever believe after I’ve been deceived?”, while synths that recall Hounds of Love~era Kate Bush swirl around him. Both tracks also show the greater level of musical detail that he’s now incorporating into his work. The Edge possibly sees him at his lowest ebb, a debilitated vocal and isolated piano lines combining to result in a stifling atmosphere slowly settling over the track.
♠  Binary is the heaviest he has sounded to date, the roaming basslines, densely populated landscapes and impassioned vocals joining forces to stunning effect. The contrast of the beautiful piano coda that follows single~handedly demonstrates the higher standards now at play. Stranger switches musical focus again, the by now familiar themes carried on this occasion by plaintive brass. Venus is arguably his best song to date, possessing a disarming simplicity, enveloping melody and real emotional attachment. Rex closes the album, the most accusing and overt Dare has been in conveying his anger at the deceptions and mistrust that have gone before. “You’ll never see the sun for what you’ve done to your own blood” he intones before the track builds to a channelled crescendo. It offers more proof that musical concepts only tentatively hinted at on his first album are here pursued with full vigour and boldness.
♠  Aforger is one of 2016’s most impressive albums and will most likely be seen as key in years to come when looking at Douglas Dare’s development as an artist. To date, the star of the Erased Tapes roster has been Nils Frahm, but albums like Aforger show the increasingly high standards that now exist on that label and how, perhaps unexpectedly, his position at the top is being seriously challenged.
Bandcamp: https://douglasdare.bandcamp.com/album/aforger
Facebook: https://www.facebook.com/douglasdaremusic/
Press: Kate Price ~
Agent: David Exley ~
Karl Morse ~ (North America)
Soundcloud: https://soundcloud.com/douglas-dare
Also:
By Rory Foster / 21 OCTOBER 2016, 15:42 BST / SCORE: 9
♠  https://www.thelineofbestfit.com/reviews/albums/douglas-dare-aforger