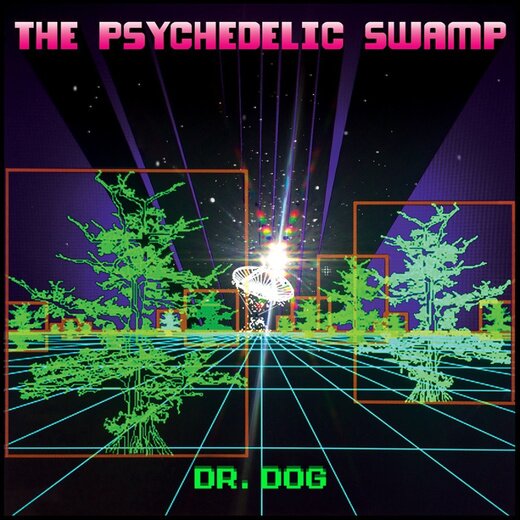 ≡   The Psychedelic Swamp is Dr. Dog’s ninth album, and third studio release with ANTI– Records. Most of the songs were among the first ever written together by Scott McMicken and Toby Leaman and an assemblage of friends and musical cohorts that would evolve as Dr. Dog over the years. This early endeavor of writing a concept album helped shape their creative process as they became a label–defying multi–hyphenated indie–psychedelic–rock–folk–Americana–basement–touring band. The Psychedelic Swamp could very well have been Dr. Dog’s first album. It could have been their only album; or it could have never been made at all. It’s either a refined culmination of 15 years of collaborative music–making or the raw instrument on which they cut their teeth. This chicken vs. egg debate will be for historians to decide; fact is that if The Psychedelic Swamp was half–baked back in 2001, it has been reborn in 2016, fully baked.

© Bowery Club
Editors’ Notes
≡   The eighth album from Pennsylvania’s Dr. Dog plays like a corroded artifact from the ‘60s — a sublime, harmony–filled rock record that’s turned toxic and warped with age, dredged up from some muddy, forgotten river bank. The truth is that this trippy, sprawling saga was released in 2008, as a reshuffled version of the band’s unreleased 2001 debut. It’s a lo–fi treasure of rusted outsider rock, spangled with glittering, off–kilter synths (“Bring My Baby Back”), wonky, water–logged pianos (“Fire on My Back) and eerily romantic bayou doo–wop (“Swamp Descent”) — in other words, a record to relish.

Review
ANDY BATTAGLIA, Updated February 5, 20163:18 PM ET
≡   It’s no surprise that a band called Dr. Dog might tend toward loopy, loping outsider rock with a slightly goofy streak. If there were any doubt, it’s quickly dispelled by The Psychedelic Swamp, a concept album that wanders and sprawls to absorbing effect. ≡   The songs on Dr. Dog’s ninth record predate the band itself: They’re sourced from a tape with formative songs written together by Scott McMicken and Toby Leaman before they’d adopted the Dr. Dog mantle. (“A half–baked idea back in 2001, it has been reborn in 2016, fully baked,” the press release promises.)
≡   The story of a psychedelic netherworld unfurls as much as a narrative–minded listener might want, but the songs also thrive, comfortably and casually, on their own. ≡   “Golden Hind” opens with a gentle swirl of acoustic and electric guitar and some deep–voiced mewling, with a mix of olden–days beatitude and menace that would play well in a David Lynch film. “Dead Record Player” steps up in a sort of glam–rock strut, with riffs reeling around spacious drums and a store of sassy T. Rex moves. The character in the song seems to be dead, tripping, or at least in a strange enough state that “when I listen to my records, no matter what they are, they sound real good but real weird.”
≡   The sound swells and expands from there, with keyboards streaking “Psychedelic Pop” and a snippy, snappy synth beat beneath “Bring My Baby Back.” A fondness for swoops and swerves (plus occasional interludes and bursts of bizarre noise) make parts of the album sound carnival–like in the manner of the latter–day psych–rock advocate Of Montreal, while solid song structures otherwise put Dr. Dog in league with The Shins or Spoon. Add a loose sort of jam–band disposition (especially in supple bass lines that wiggle and run throughout), and enough idiosyncrasy abounds to make The Psychedelic Swamp more than worth a ramble. ≡ http://www.npr.org/