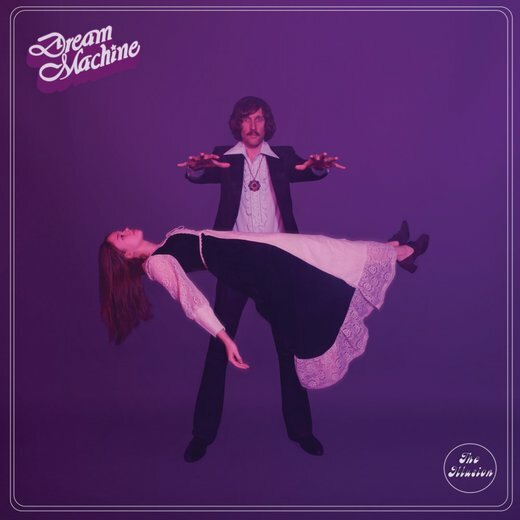 ι•ι   The Illusion is the debut album from Dream Machine, the group established by husband and wife team Matthew and Doris Melton, with Dillon Fernandez and Rudy Spencer. The Austin based band has created a sound that brings to mind some of the super groups of the sixties including The Doors, Iron Butterfly and Deep Purple, which are all influences as well. The entire album is unlike anything you will hear on your playlist now.
ι•ι   “Of course, she’s right. Progressive rock has taken its knocks, what with expensive Persian rugs, keyboards in cathedrals, airy-fairy artwork, and the concept of infinity used as an actual time signature in a song, renamed, of course, by the artists as “a composition.”  Dream Machine avoids all of that, thankfully, with an album that’s just filled with expansive, exciting, and good old heavy music.” (Bill Golembeski)

Location: Austin, Texas
Genre: Pop Rock, Psychedelic Rock
Style: Garage Rock, Heavy Metal, Prog Rock
Album release: May 18th 2017
Label: Castle Face Records
Duration:     34:23
Tracks:
01. The Illusion     3:21
02. Eye For An Eye     2:34
03. I Walked In The Fire     2:20
04. Buried Alive     3:43
05. Torn From The Hands Of Another     3:00
06. All For A Chance     2:14
07. Lose My Place In Time     3:17
08. Caught In A Trap     2:53
09. Nothing Left     2:50
10. Back To You     4:50
11. Weeping Statue     3:21
© and ℗ Matthew Melton 2017
Companies, etc.
•¬•    Recorded: Fuzz City Studios, Austin TX
•¬•    Mastered: Fuzz City Studios, Austin TX
Credits:
•¬•    Rudy Spencer — Bass Guitar
•¬•    Dillon Fernandez — Drums
•¬•    Steven Ruud — Photography
•¬•    Doris Melton — Songwriter, Lead Vocals, Electric Organ, Synthesizer
•¬•    Matthew M. Melton — Songwriter, Recording Supervisor, Electric Guitar, Lead Vocals, Mastered
•¬•    All Songs written together by Matthew & Doris Melton
•¬•    Recorded and Mastered by Matthew Melton at Fuzz City
•¬•    Photography by Steven Ruud
•¬•    All Songs Published by Matthew Melton (ASCAP)
•¬•    The debut album from ex~Warm Soda bandleader Matthew Melton’s ostensibly retro sounding psych~rock manifestation Dream Machine, The Illusion invokes names like Iron Butterfly, Heart, Deep Purple, Strawberry Alarm Clock, and the Doors. The logical next sonic step for the Austin, Texas~based artist’s quartet (Warm Soda was a period-specific sounding power~pop unit), which also includes Melton’s wife Doris on organ, synth, and vocals, Ruth Spencer on bass and vocals, and Dillon Fernandez on drums, have certainly captured the sound of the era, even going so far as to record their instruments tuned to 432 Hertz (a frequency that some audiophiles feel is more pure, and even transmits healing energy), not the standard 440. They also got the look down via a deep purple (go figure) album jacket with Melton dressed like hirsute ‘70 magician Doug Henning while Doris levitates beneath his magic fingertips. What they don’t have are any original ideas, with each track working off a template that usually starts with a bluesy, minor guitar lick that eventually locks up with the organ and bass, and then makes its way into a chorus that sounds like a confluence of the Electric Prunes’ “I Had Too Much to Dream Last Night” and Jefferson Airplane’s “Somebody to Love.” There are a few moments when the band flirt with innovation (the dreamy “Nothing Left” and “Weeping Statue” suggest that their musical interests extend beyond “In~A~Gadda~Da~Vida”), but the aptly named Illusion is a confection of the highest order; it’s meticulously crafted and expertly rendered, but so are most sugar cereals.
•¬•    “Lose My Place In Time” could have easily been in a set list for The Doors, both with the music and lyrics.
•¬•    A personal favorite is “Back To You”, an instrumental tour de force for the first two and a half minutes. It is pure rock and roll with a psychedelic vibe using the organ.
•¬•    If it seems like Dream Machine is trying to harken back to simpler times, they are. Expands Matthew Melton, “The Illusion was mostly inspired by our observation of how people today are suffering under the spell cast by obsessively using social media and smart phones. We don’t take it lightly — Studies show that since the dawn of social media people have become increasingly unhappy, disharmonic, and dissatisfied with life, and it only seems to be getting worse. The whole basis of social media is conditioning people to receive their mental stimulation from an external device rather than from actual experience and it only seems logical that this will gradually desensitize us as we grow increasingly dependent on it, all while the truly meaningful moments of our lives fall by the wayside, increasingly interrupted by it.”
Review
By Gannon | May 15, 2017 | Score: 7
•¬•    From the ashes of Matthew Melton’s effervescent Warm Soda project rises Dream Machine. Such is the circle of life. That band was all about honest~to~goodness power~pop, neat guitars leading to blasts of garagey rock ‘n’ roll, but Dream Machine is an altogether different proposition. Darker, seedier, it looks like it may hail from the wrong side of the tracks, yet all is not what it seems. The Illusion is just that.
•¬•    Melton plays a velvet~clad character alongside his wife Doris’s all conquering organ lines and between them and some speeding drum fills they conspire to deliver a series of hard~rocking riffs and hooks which, thanks to their surprising simultaneous pillowiness, nevertheless hold universal appeal. All the tough stuff is just for show it turns out, The Doors hitting muscle beach with Marc Bolan just for kicks. Consequently The Illusion is outrageously good guitar fun, a downright hoot even, its flip arguably more melancholy, but even then these are jams with equal parts righteousness.
•¬•    Melton still knows his way around a killer chorus too, simply decorating the marauding guitar and organ virtuoso parts with his big smile. The title track deploys both to establish a crunchy groove, Doris jamming away like the Phantom possessed, him digging deeper and deeper into the vibe to pull out a wild solo to close. The two combine to head~banging effect on the standout “I Walked In The Fire” too, the frontman performance here turning deliciously shamanistic. In places the result is like a poppier, super~charged Black Mountain, yet the mind~bending closer, “Weeping Statue”, takes no such prisoners as it launches off instead in the direction of some spacey prog~opera, laser FX firing off like fireworks over the Disney castle. The Illusion is triumphant stuff from team Melton, softening the blow that Warm Soda is no more, Melton a man utterly reborn.
•¬•    Best track: “I Walked In The Fire”
•¬•    http://www.sicmagazine.net/
Also:
Jonathan Aird | Posted on June 21, 2017 | Score: 8
Summary
•¬•    The Meltons triumphantly return with a new band and a new sound. It’s wild and groovy — and you can dig it.
•¬•    http://americana-uk.com/dream-machine-the-illusion-castle-face-records-2017
By Bill Golembeski | Rating: 9
•¬•    https://soundblab.com/reviews/albums/18070-dream-machine-the-illusion
Bandcamp: https://dreammachine432.bandcamp.com/album/the-illusion
Label: http://www.fuzzcityrecords.com/
Website: http://www.dreammachine432.com/