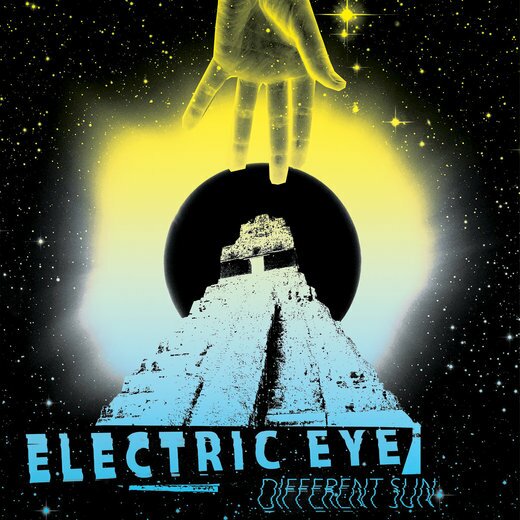 ••••   Electric Eye play droned out psych–rock inspired by the blues, India and the ever more expanding universe. On the bands inspirational mix tape, you will probably find songs from the The Black Angels, Wooden Shjips and Pink Floyd in Pompeii.
Location: Bergen, Norway
Album release: February 5, 2016
Record Label: Jansen Plateproduksjon
Duration:     38:49
Tracks:
1. Silent By The River     5:06
2. All Of This Has Happened Before And Will Happen Again     6:13
3. Mercury Rise     5:23
4. Bless     4:15
5. Heavy Steps On Desert Floor     7:44
6. Never Fade Away     3:59
7. Part One     6:09
Personnel:
•   Oystein Braut (guitar, vocals),
•   Njal Clementsen (bass),
•   Anders Bjelland (keyboards) and
•   Oyvind Hegg–Lunde (drums)
January, 2015: A new year’s hurricane is ravaging Bergen. Its aftermath rips and tears into the Western Norwegian town for a week. In Broen Studio, where Electric Eye are plugged in, the walls constantly shake from lightning, thunder, violent downpours and wind. It probably isn’t a coincidence that “Different Sun”, album number two from the quartet, is a record full of fickle and dramatic energy. It’s veritably crackling from fuzz guitars and psychedelic organs. Electric Eyehave definitely landed. In the eye of the hurricane.
•   Through 40 minutes the listener is this time taken on seven journeys, all drenched in tape echo, sitar sounds, backwards guitar solos, bongos and monotonous fuzz bass. A dynamic rollercoaster where the landscape soon fluctuates between open and calm desert moods, and then suddenly ignites the rocket engines and leaves the atmosphere once and for all. The Bergen–based group, consisting of Oystein Braut (guitar, vocals), Njal Clementsen (bass), Anders Bjelland (keyboards) and Oyvind Hegg–Lunde (drums), are thus following up their debut album “Pick–up, Lift–up, Space, Time” from 2013 in a brilliant way.
•   That the phrase “the journey is the goal” may seem tired doesn’t make it less truthful. ForElectric Eye this is the fundament for their musical existence. Long musical journeys in wide landscapes where the moods and the overwhelming, absorbing and repeating themes play a key role. As a listener you have two choices: either you’re with it, or you leave it. With «Different Sun» on the turntable, the choice is easy.
•   Electric Eye’s own journey must be considered to be modest seen from a universal perspective, but with the members’ previous experiences from solid musical projects like The Megaphonic Thrift, The Low Frequency in Stereo, Hypertext, The Alexandria Quartet and Junip, the quartet have built for themselves ia well–constructed spaceship. «Different Sun» was mixed by Anders Bjelland in Broen Studios and mastered in Duper Studio by the honoured Jorgen Traen, so it sounds beautiful.
•   After their debut album the quartet received a lot of attention, especially from abroad. The music press and the bloggers were effusive in their praise of the band, who turned up on many best–of–the–year lists and were played a lot on radio stations in the USA, England, Argentina, Mexico, Holland, Denmark and Belgium. Electric Eye have drawn notice as a live band, too. Since 2013 they’ve toured both Europe and the USA, plus participated in music biz conferences like Eurosonic, SXSW, The Great Escape, Iceland Airwaves and the Spot Festival in Denmark. The response has been overwhelming — the biggest coming from the psychedelic music scene, who in every way have had their eyesand ears opened to the band.
•   It’s fully possible to hear traces of the golden psychedelic reveries of the 60s and the lyrical and scenic progrock of the 70s in Electric Eye’s music. A dose of motoric, German sounds must be mentioned, plus Indian drone music. But «Different Sun» is first and foremost proof of Electric Eye as a band who in every way are present in the moment, where they guide the listeners on a perpetual musical journey full of surprises. Fasten your seatbelts and look for a different sun!
Bandcamp: https://electriceye.bandcamp.com/
Tumblr: http://electriceyenorway.tumblr.com/
Soundcloud: https://soundcloud.com/electriceye
Twitter: https://twitter.com/electriceyeband
Website: http://www.electriceye.no/
Facebook: https://www.facebook.com/electriceyeband