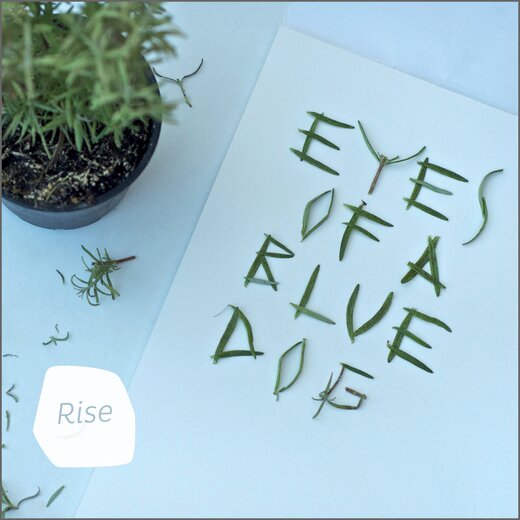 Eyes Of A Blue Dog — Rise
Location: Norway, UK
Album release: 2013
Record Label: Babel Label
Duration:     46:23
Tracks:
1. Mai     6:21
2. Rise     2:35
3. Marble Faces     7:22
4. Reject The Rhapsody     4:26
5. Nothing Dies With You     4:35
6. Little Piece Of Everything     6:33
7. Deliverance     3:45
8. Knee     6:37
9. Falling     4:09
Personnel:
¤ Rory Simmons: trumpet, guitar, electronics
¤ Terje Evensen: drums, electronics
¤ Elisabeth Nygård: vocals (2, 4, 5, 7, 9)
¤ Chris Hill: bass (3)
Website: http://rorysimmons.com/
Website: http://www.terjeevensen.com/
Facebook T.E.: http://www.facebook.com/evensen.terje
By JOHN KELMAN, published: May 14, 2013
¤ As disproportionate as the amount of fine music being made in Norway is to its relatively small population of five million, so, too, is its surprisingly large cadre of outstanding drummers. A quick scan through the list of drummers who have made some kind of name for themselves, both at home and abroad, include—amongst many, many others—Audun Kleive Audun Kleive (Terje Rypdal, Nils Petter Molvaer, Per Oddvar Johansen (The Source, Christian Wallumrod Ensemble), Erland Dahlen ((Molvær, Eivind Aarset Sonic Codex Orchestra), Torstein Lofthus (Elephant9, Mathias Eick) and, of course, the drummer who started it all, Jon Christensen (Jan Garbarek, Bobo Stenson, Keith Jarrett), helping put Norway on the map in the early '70s with a series of ECM recordings. Add to that list Terje Evensen, who has, relatively quietly, emerged on the scene after studies with Martin France — ultimately contributing additional drums, electronics and programming to the British drummer's two very fine Spin Marvel records, Spin Marvel (Babel, 2007) and The Reluctantly Politicised Mr James (Edition, 2010).
¤ The odd but compellingly titled Eyes of a Blue Dog—drawn from a short story by Latin American author Gabriel Garcia Marquez—and its debut, Rise, are already garnering international attention through its release on the UK's intrepid Babel Label. Essentially an instrumental duo, with Elisabeth Nygaard (Colin Riley's MooV) augmenting Evensen and British trumpeter/guitarist Rory Simmons (leader of the 10-piece LOOP collective third stream ensemble, Fringe Magnetic) contributing vocals to five of Rise's nine tracks (though the UK-based Swedish singer shares compositional co-credit for the entire set), rather than monolithically predicated on a single foundational premise, Rise stems from a multitude of touchstones, without losing either its focus or voice.
¤ No surprise, given Evensen's broad purview, having toured with everyone from British saxophonist Julian Arguelles (b. 1966) to Peruvian guitarist Andrés Prado, participating in live remixes at the annual Punkt Festival in Kristiansand, Norway and releasing a superb album of solo percussion and electronics, Still You. You Still Here. (fonorum, 2010). Moody ambient soundscapes, modernistic song forms and aggressive electro-stances are definitive throughout Rise, but Evensen not only demonstrates a strong sense of rhythm and color on more electrified songs like "Reject the Rhapsody" and the thundering pulse of "Falling," but similar deftness in the somewhat more acoustic context of "Marble Faces." Beginning with Simmons' looped guitar and layered trumpet, the tune gradually becomes an open-ended but clearly concentrated and connected improvisational foray between Evensen, Simmons and, on this track alone, Chris Hill — British singer Jamie Cullum vocal 's bassist since 2009—turning Rise's longest track into an instrumental highlight of the set.
¤ With an appealing, burnished tone all his own, like Evensen, Simmons is equally adept across contexts, as informed by Nils Petter Molvær's electrified lyricism ("Mai") as he is more abstruse melodism ("Little Pieces of Everything"). Nygård combines a gossamer delicacy with more emphatic strength, her phrase-ending vibrato rendering the singer instantly recognizable.
¤ A crossover record as comfortably categorized in contemporary experimental rock as ambient improvisational jazz territory, Rise is an impressive debut from a group that may just be getting started, but clearly has a very promising future on the road ahead.
Fortaken: http://www.allaboutjazz.com/

REVIEW
¤ Eyes of a Blue Dog take their name from a short story by the Latin American ‘Magical Realist’ author Gabriel García Marquez, in which a narrative of frustrated desire unfolds entirely within its protagonist’s subconscious mind. The group are less lost to abstraction, merging ambient electronic soundscapes with dark, beats-driven song.
¤ The group comprises the British trumpeter Rory Simmons (also electric guitar and electronic treatments), the Norwegian drummer Terje Evensen (also electronics), and the Norwegian, UK-based singer Elisabeth Nygård. Rise (Babel Label) is their debut album.
¤ Simmons and Nygård are both from the British experimental jazz scene—Simmons is a member of North London’s LOOP Collective, while Nygård, of Leeds’ LIMA collective, has sung on both albums to date by Simmons’ group Fringe Magnetic—but this band takes its cues primarily from the experimental hinterlands of British electronic pop.
¤ Although their press release shies away from any such association, there’s a strong dose of trip-hop in Eyes of a Blue Dog’s musical makeup, albeit they give it a nu-Nordic twist. Nygård adopts the ingenue sing-song style of Martina Topley Bird on “Rise”, while a backing of blunted beats is reminiscent of Trick’s Maxinquaye sound. And with Nygård’s voice at a cold remove from its moody, metalliferous rhythm track, “Falling” might have been modelled on Massive Attack.
¤ But Eyes of a Blue Dog aren’t simply derivative. Simmons combines with Evensen to reinterpret the sonic tropes of mid 90s electronica according to the current sensibilities of experimental and improvisational jazz.
¤ “Mai” makes for a downbeat opener. Simmons plays a solo, muted, of burnished mournfulness (cf. the haunting end title theme from the movie, Chinatown) over submerged loops and a blend of kit drums and insectoid electronic percussion. There are no vocals here, and although the music for all nine tracks is collectively credited five of them are instrumentals.
¤ A guest bassist adds low-end ballast to ”Marble Faces”, as prickly guitar and trumpet loops chip away at skittering polyrhythms. Simmons’ trumpet takes the melodic lead, both here and on “Knee”, where he plays wonderfully, shaping notes from silence as if in tribute to Kenny Wheeler until electric keys pick out a counter-melody. Less successful, the repetitive/motoric “Little Piece of Everything” goes nowhere, and outstays its welcome.
¤ Where she features, Nygård makes a big impression (the album comes over as song-based). She sounds less pliant here than either when singing standards or in collaboration with Colin Riley’s avant-garde electro-acoustic ensemble MooV. Her sticking to narrower emotional ranges suits the present trio’s songbook. She sounds something like a breathy Goldfrapp on the dark ambience of “Nothing Dies with You”; more like Anja Garbarek on “Reject the Rhapsody”, where she sings over a synthetic bass line that punches into off-kilter electro made from drive-by beats. A nice interlude has Nygård’s voice exposed, with just guitar and ghostly ambient noise for accompaniment. It’s one intimate moment on an otherwise coldly effective collection.
¤ Nygård’s affectlessness and Simmons’ restraint suit the textures that result from Eyes of a Blue Dog’s electro-analog pre- and postproduction merger of songcraft and soundscaping. Rise transcends its influences thanks to the trio’s feeling for jazz, which they bring to bear by degrees of expressive subtlety.
Fortaken: http://dalstonsound.wordpress.com/ 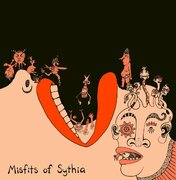