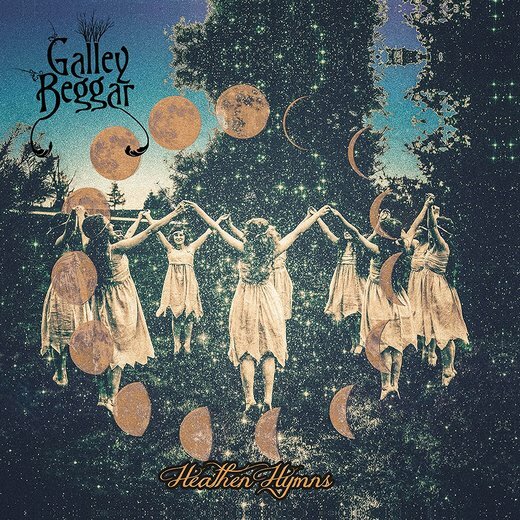 ι•ι   Heathen Hymns is a modern timeless album of 60’s laden psychedelic folk rock.  Pulling from influences such as The Doors, Fairport Convention, Donovan, and Jethro Tull, Galley Beggar has found a way to create something that is distinctly their own and more than welcomed breath of fresh air or even a splash of cool water.
Location: Kent, England, UK
Album release: April 28, 2017
Record Label: Rise Above Limited
Duration:     42:16
Tracks:
01 Salome     6:41
02 Four Birds     4:41
03 The Girl I Left Behind Me     8:12
04 The Lake     2:54
05 Lorelei     4:30
06 Moon and Tide     4:19
07 Let No Man Steal Your Thyme     5:28
08 My Return     5:31
Review
PHILIP FAIRBANKS, 5:41 pm April 27, 2017 / Score: ****
•••   Galley Beggar defies simple definition with ease, being a complex thing of no simple conception themselves. No friend of pigeonholes, the Beggar crew is something of an electric based neo~folk outfit with some slightly psychedelic, almost metal underpinnings bleeding in at times just in case things were getting too neat at the corners. There unfortunately aren’t a lot of groups around today that express the same sort of singularity of vision and execution as Galley Beggar, but the English Psych~Folk revivalists do the job of ten groups in the interim.
•••   They much more closely fit the weird and ethereal world of psychedelic folk of the 60s (a la Ace of Cups or Leopold Perry) or the funky, quasi~metal progressive neo~folk stylings of Jethro Tull in the 70s than much from their contemporaries. There’s definitely something heavy, portentous and potent in that old folk groove the Beggar’s wield however as they twist it from Celt to blues to Black Sabbath and back again.
•••   The album opens with a simple heathen hymn, entitled Salome. Salome’s slyly Gaelic blues banshee howl is captivating from the initial trip of the opening riff as it repeats and reverberates. A sense of something building, something circling is nearly ever~present on Heathen Hymns.
•••   I was drawn to the UK based “minstrels in the galley” from their name on, and it makes sense considering my love and appreciation for English and Celtic folk music and lore. The name itself refers to a malevolent sort of spirit supposed to haunt Somerset and Suffolk region in the North of England. The Galley Beggar carries it’s own severed head while squealing like a banshee, quite a sight it seems and existing solely for the purpose of inspiring fright.
•••   The existence of Galley Beggar, the group, is more a thing of wonder and enchantment to my ears, however. A trancelike ambient environment sculpted of sound and sense is some great part of the wizardry employed by the Kentish Acid folk sextet, the guitar mirrored by sitar, and accompanying lyrical harmony as the near rondel of the melody undulating with the mantra, circles around again like a children’s game of Ring around the rosie or Imbolg celebrated upon a misted mountain’s top.
•••   The stirring and hypnotic rendition of classic English folk tune “Let no man steal your thyme” hearkens back to Fleetwood Mac’s earliest incarnations as pioneers of English Psychedelic Folk. To test this theory out I switch over from the Galley to the Fleetwood, 1969’s “Man of the world” (cutting right in the middle of the instrumental, no less) there’s a sort of continuity here, a sense of a lineage being preserved as well as propagated.
•••   The album closes out with “My return” another tune, like the opening track that wouldn’t seem out of place played in some holy mountain at whatever Equinox or Solstice is nearest or most fitting.   •••   http://newnoisemagazine.com/                                               Also:
Don de Leaumont (aka. The Brainfart,  April 19, 2017)
√   You must be thinking, “This dude was high as fuck when he wrote this.”  Believe it or not, I wasn’t.  The music was so good on it’s own that it had me feeling all of these things without the aid of any green stuff.  With Heathen Hymns, Galley Beggar has managed to create a whole new chapter in modern psych rock that hopefully will be filled in by other bands not afraid to expose their roots and crossover into a genre of music not expecting them but more than welcoming them.  Heathen Hymns is not merely background music and it is so much more than just another album.  Heathen Hymns is a collection of songs for the mind, for the spirit, and for the soul.  This is music that is capable of making you feel something and taking you someplace truly magical.  You just have to hear it to understand and when you do, you will.
•••   http://thegreatsouthernbrainfart.com/?p=17041
Twitter: https://twitter.com/galleybeggar
••••••••••••••••••••••••••••••••••••••••••••••••••••••••••••• 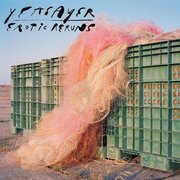