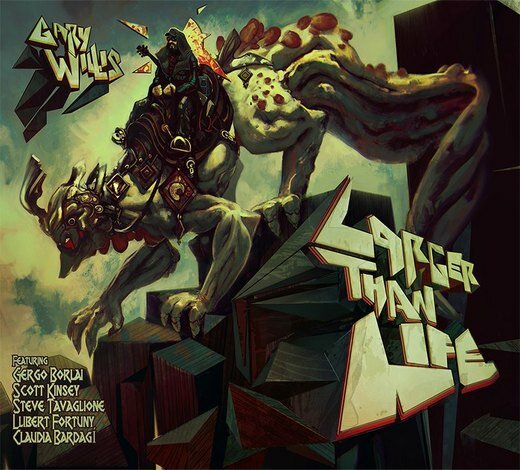 ••≡••  World Leading Bassist, Gary Willis, to Release New Album, Larger Than Life… no a pokud víte, co vám dělá radost, proč to měnit? “A delicious collection of fusion–funk for the twenty–first century.” Joining me on this set of twelve tracks are Gergo Borlai on drums, Scott Kinsey on keyboards, Steve Tavaglione on saxes and EWI, Claudia Bardagí on voice and Llibert Fortuny on tenor sax and voice.
The album’s accompanying artwork, by Brazilian artist Rafael Sarmento, binds the tracks together in a kind of fantastic visual and aural universe. “In working with Rafael, what I’d like to do is push people toward listening with their imagination,” Willis explains. “Hopefully, my music inspires some kind of other awareness or consciousness — another world to escape to.” Indeed, for seventy–plus minutes, Larger Than Life does just that.

DESCRIPTION:
•≡≡•  Gary Willis, one of the world’s leading bassists, has delivered his fifth album Larger Than Life — a delicious collection of fusion–funk for the twenty–first century. •≡≡•  Joining Willis on this set of twelve tracks are Gergo Borlai on drums, long–time Tribal Tech band mate Scott Kinsey on keyboards, Steve Tavaglione on saxes and EWI, Claudia Bardagí on voice and Llibert Fortuny on tenor sax and voice.
•≡≡•  At the core of Larger Than Lifeis the trio of Willis, Borlai and Kinsey. Willis and Kinsey have had a great rapport going back to Tribal Tech, the fusion juggernaut that Willis coled with guitarist Scott Henderson, and Willis’ albums No Sweat (1996) and Bent (1998). Willis first met Borlai on a concert in Budapest in 2009. They had so much fun that it planted the seeds for this album, which eventually took root at a recording session at Kinsey’s California studio, followed by more jamming with Borlai in Barcelona. From there, Willis arranged, reassembled, and “reverse engineered” the original tracks into the finished songs heard on this album. The epic title track, for instance, comes from the trio session at Kinsey’s. “It started as an intense 17–minute jam,” says Willis. “then Kinsey edited it down to its current length and I did some more writing to give it substance. Tav added some layering and colors, and Claudia sang the melodies. This all happened while passing the music back and forth from Barcelona to LA, that’s how we make music these days.”
•≡≡•  Funkiness is never far away when these guys get together, and after the full ensemble wails on “The Professionals,” the trio gets down on Willis’ slinky tune, “Everything’s Cool,” which he originally recorded on Bent. His solo here is a fretless tour de force with lightning quick runs, chord passages and harmonics. They tear it up on “Hipster,” a neoswinger that features Willis’ take on the walking upright. The tune’s initial lo–fi, quasiabsurdist drum part is actually Borlai playing “finger drums,” in which he triggers drum samples from a keyboard. “He can play the hell out of the drums that way,” says Willis. “anything he can play on real drums he can do on the keyboard, it’ll blow you away.” And the trio absolutely flies through Kinsey’s aptly named “2Fast,” a flat–out fusion burner. “The thing is, when the three of us play together, it just flows,” says Willis. “It’s effortless. We don’t have to talk about things, we don’t have to discuss direction; it just happens, especially with Gergo. Playing with him, all possibilities are open and they will all be taken to full advantage.”

© Enter-to-Win-an-Ibanez-Signature-Gary-Willis-GWB35-Bass-and-Tone-Hammer-500-Bass-Head
•≡≡•  Kinsey is in top form throughout — a master synth player and programmer with sounds as modern as they get, but grounded in an electric piano approach that harkens back to the best of Weather Report. “There’s nobody out there like him,” Willis says of Kinsey’s mix of old school/new school. “He nailed everything on this project, and his Rhodes playing is just killing.” Steve Tavaglione turns in some tasty soprano sax solos (“Larger Than Life,” “Solaris”), but his command of the EWI — a kind of wind synthesizer — puts him in a category of his own. His contributions loom large, whether it’s expressive soloing or adding layers and color. “Tav is another one of those incredibly unique guys,” explains Willis. “It’s amazing what he came up with. Some of it I wrote for him; in other places he just improvised amazing stuff. He spends most of his time creating music for film so he thinks and plays very cinematically.”
•≡≡•  Several tunes on Larger Than Lifeare enhanced by Claudia Bardagí’s wordless vocals, which accentuate Willis’ lyrical melodies. “I intend for melodies to stand on their own,” explains Willis, “and Claudia’s voice gives them a human quality that adds another element to the music.” Llibert Fortuny rounds out the ensemble, and his tenor sax shines on “Vendetta,” an ominous–sounding Willis tune whose soundscape is heavily shaped by the versatile Borlai’s programming.
•≡≡•  Another Willis composition, “Beast Mode,” was written specifically for Borlai, whose stunning chops are on full display. “It was the last thing that we did,” says Willis. “I sent the tune to Kinsey and he and Gergio recorded it in one take. They sent it back to me and I did a couple of takes, and that was it.” “Alien Head Explodes” started life as a WillisBorlai jam, but “whatever I played didn’t inspire that song,” says Willis. “Gergo rewrote it and came up with a whole new direction and I added my parts later.” 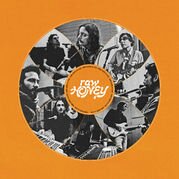