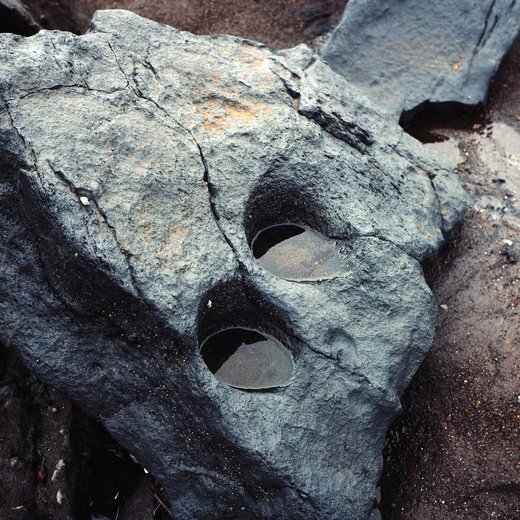 Location: Milan, Italy
Album release: February 12, 2016
Record Label: Error Broadcast
Duration:     27:09
Tracks:
1. 3'34''      3:34
2. 4'22''      4:22
3. 4'32''      4:32
4. 4'18''      4:18
5. 6'48''      6:48
6. 3'33''      3:33
•→  All music by Giuseppe Ielasi
•→  Photography by Yana Wernicke
Review
Joseph Sannicandro
•→  Inventing Masks is a new moniker adopted by Giuseppe Ielasi. Ielasi’s work should be familiar to our readers, as a solo artist, prolific collaborator, and as a label curator.  Ielasi chose this new name in order to unite his more rhythmic, beat–related post–Stunt material, though he will continue to use his own name for other projects. He was the subject of the sixth installment of Sound Propositions in 2014, in which we discussed his influences, creative practices, and aesthetic and ethical commitments.  We also briefly discussed his interest in hip hop, an influence that continues to be felt through his work as Inventing Masks.
•→  Steeped in free improvisation and musique concrète, Ielasi’s creative output nonetheless defies any such categorizations. Much of his earlier work was ambient and textural, but over the years his compositions have come to focus more on spatialization and the materiality of sound.  The Stunt trilogy [Stunt (2008), (Another) Stunt (2009), and (Third) Stunt (2010)] explored rhythm most explicitly, and remain extraordinary for their humanity and accessibility even among similar works of turntablism.  But Ielasi’s turntable experiments are only one manifestation of his rhythmic prowess, also documented in the grid–based compositions of Aix (2009) and the object–studies of Tools (2010), and even his sampler–based work with Andrew Pekler, Holiday for Sampler (2013).  Ielasi listens carefully to the timbral qualities of his samples, and his compositions are guided in part by the morphology of each sound.
•→  Inventing Masks is not a radical break but rather a distillation and continuity of these earlier tendencies.  Fans of Ielasi’s previous work will be delighted, and new listeners are sure to be enticed by the clarity and inventiveness of his concrete beats. Ielasi’s approach to sampling, constructing rhythmic grooves and textures is not an attempt to create hip hop or appropriate social signifiers he is removed from, but is instead a manifestation of his own influences and interests in a way which births something unique that may still appeal to fans of beat music. It’s been said that hip hop is at heart heady music, studio music and “sonic fiction,” to use the words of Kodwo Eshun. Ielasi’s music is quite far from hip hop in many respects, of course, but that same time–bending rhythmic introspection is present in full force.
•→  2015 was an unusually quite year for Ielasi, seeing only the release of a limited–edition Bellows LP on Boomkat (his fourth collaboration with Nicola Ratti) and just 11 copies of Untitled (Riga) from Antisolar‘s endless cassette loop series.  Unfortunately 2015 also saw the (hopefully temporary) shuttering Senufo Editions, the label Ielasi curates with his partner Jennifer Veillerobe. At the end of 2015, Error Broadcast released the digital version of Stunt (Appendix),  the “almost secret” fourth installment of Stunt which had previously only been available in a limited edition 3 x 7″ box set from Holiday Records (2013).  Happily this was just a prelude to Inventing Masks, an early contender for 2016s essential records.  Error Broadcast has distinguished itself as a home to forward–thinking instrumental hip hop and off–kilter beat music by the likes of Monolithium, Shlohmo, SELA and B–Ju, and is a fitting place to introduce Ielasi to new audiences.  (Joseph Sannicandro) •→  https://acloserlisten.com/
Press:
•→  After a hiatus of three years Inventing Masks aka Giuseppe Ielasi publishes his self–titled debut LP. ‘Inventing Masks’ comprises six concentric but slightly out–of–balance sound sculptures, equally inspired from generative composition, ambient music, and hip hop.
•→  “Atands alongside some of the greatest loop–based records”. — WIRE
•→  “A scrappy tenderness that commands attention”. — FADER
•→  “Reveals new fissures and half–cut motifs with each listen”. — BK
•→  “Time–bending rhythmic introspection”. — A Closer Listen
Bandcamp: https://ielasi.bandcamp.com/album/inventing–masks
Wordpress: https://ielasi.wordpress.com/
Facebook: https://www.facebook.com/Giuseppe-Ielasi-102293919812332/
“”“”“”“”“”“”“”“”“”“”“”“”“”“”“”“”“”“”“”“”“”“”“”“”“”“”“”“”“”“”“”“”“”“”“”“”“”“”“”“