Personally, I don't really know that I am affected by landscape and physical surroundings so much when I am writing songs, although maybe I could be on a subconcious level. I have yet to write a sea shanty or my 'Rocky Mountain High', not to say I never will. Maybe I should be gawking out my south-end Saint John window into the heart of the harbour to see what inspiration I can draw, or sit on the top of Fort Howe, indulge myself in the open mouth of the bay and see what I come up with. Maybe this question has inspired me.
I will say that in spending thirty-three kazillion hours in a van connecting the dots across this gigantic country, I have been given plenty of time to write and think. I know that several song ideas have been sparked and spawned while staring blankly out the window with wandering random melodies swimming through my road noise-numb head. Hmmm, actually maybe all my songs are influenced by our landscape. 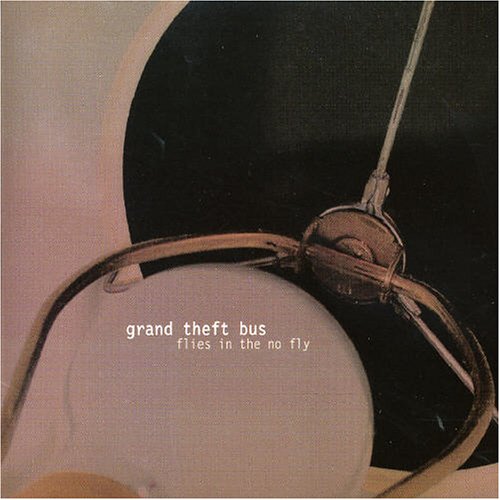 GTB has garnered a reputation as one of Canada's busiest and most exciting bands. Although known for their sprawling exploratory performances the group's first studio effort Birth of Confusion was extremely well received by both critics and fans alike. This album bodes well and is a stepping stone as to what this group can offer. 2005.

Hailing from Southern New Brunswick, Grand Theft Bus Has Garnered a Reputation as One of Canada's Busiest and Most Exciting New Bands. Although Known for their Sprawling Exploratory Performances the Group's First Studio Effort "Birth of Confusion" was Extremely Well Received by Both Critics and Fans Alike. This Album Bodes Well as a Solid Debut and a Stepping-stone as to What this Group Can Offer.
Customer Reviews:
Sean Patrick Bonner:
Grand Theft Bus is become sort of a local cult through the Maratimes in Canada, especially within the province of New Brunswick. Their first album, "Birth Of Confusion", put the band on the local band scene and helped them establish a strong fan base. Their sophmore effort, "Flies In The No Fly," definetly is just as strong as their first. Grand Theft Bus is a tough band to describe, but the closest I can come is Phish meets Weezer.
The song writing on this album is next to perfect. "Room In Your Brain" is the opening song and delivers a catchy chorus on top of simplistic yet astonishing guitar riffs, and this song is an excellent opening to "Flies In The No Fly."
Track four, "Plastic" is arguably the most infective song on the album. It is impossible not to tap your foot to this funk-driven, jazz rusted tune.
"Get What You Give" is darker than the hour before dawn, yet it is irrestible. "Get What You Give" is almost as dark as the haunting "Leader," which makles you almost feel guilty for liking it.
All-in-all, Grand Theft Bus is a solid band that many people unfortunatly have not heard of and are definetly worht checkin out.
Steve Kimball:
For all Grand Theft Bus fans out there, this may come as a shock to you, but this album is borderline radio. Don't get me wrong, this is a great album. But anyone who has been a fan of there first album, you will see that they have changed a bit. More radio-friendly tracks makes it easier for casual pop/rock fans to enjoy. From the first track o the last, it is relatively good. Good beats and deep vocals return though, which will be the reason I remain a fan of this great maritime-based band. One thing for sure, I will never pass up a live show from these guys, nor would I ever pass up an album.

Animal Collective - "What Would I Want? Sky"

Do Make Say Think - Other Truths