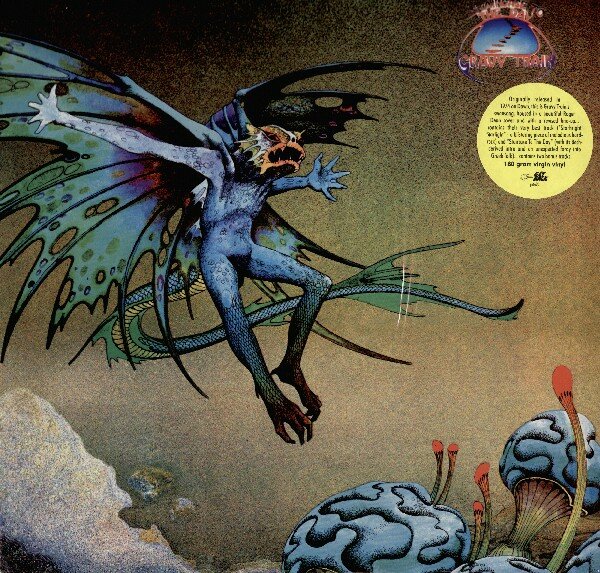 GRAVY TRAIN — STAIRCASE TO THE DAY
Location: UK
Album release: 1974 + reissues
Record Label: Dawn/Castle/Get Back/Repertoire
Duration:     43:52
Tracks:
1 Starbright Starlight     4:28
2 Bring My Life on Back to Me      5:48
3 Never Wanted You     4:04
4 Staircase to the Day     7:31
5 Going for a Quick One     5:16
6 The Last Day     5:36
7 Evening of My Life     2:59
8 Busted in Schenectady     8:11
Personnel:
— Norman Barratt (guitar, vocals)
— Barry Davenport (drums)
— J.D. Hughes (keyboards, vocals, wind instruments)
— Lester Williams (bass, vocals)
— George Lynon (guitar)
with
— Mary Zinovieff / keyboards, violin
— Peter Solley / keyboards, vocals
— Jim Frank / Drums
— PP Arnold, Faye Doris, Bobby Harrison / Backing vocals
— Vic Smith / Cowbell
CREDITS:
ψ  P.P. Arnold  Vocals (Background)
ψ  Norman Barratt  Guitar: Ac. + El. + Rhythm, Vocals, Vocals (Background)
ψ  Candy John Carr  Composer
ψ  Martyn Dean  Photography
ψ  Fay Doris  Vocals (Background)
ψ  Gospel Ayres  Vocals (Background)
ψ  Bobby Harrison  Vocals (Background)
ψ  Simon Hayworth  Engineer
ψ  J.D. Hughes  Keyboards, Vocals, Wind
ψ  George Lynon  Guitar, Guitar (Acoustic), Guitar (Electric)
ψ  Bernd Matheja  Liner Notes
ψ  Vic Smith  Arranger, Composer, Cowbell, Engineer, Producer, Remixing
ψ  Peter Solley  Synthesizer
ψ  Lester Williams  Bass, Vocals
ψ  Mary Zinovieff  Synthesizer, Violin
Ξ   It's very true, Gravy Train were never considered as a 'top shelf' prog act, but they have given us some memorable moments (I'm not familiar with 'Second Birth, but own the other 3 LP's) — with 'Staircase To The Day' we have a stunning Roger Dean gatefold sleeve to enhance the listening experience, which may contain some vocal short-comings (Norman has a rather abrasive quality to his voice, and he is often very passionate in his delivery, this makes his vox quite an acquired taste).
Ξ   Opening with the dynamic track 'Starbright Starlight', it suggests that the listener may have a winning hand with this album. Pete Solley's synth work being a treat, and the tune itself quite memorable. 'Bring My Life on Back To Me' is a rather standard tune, but Norman sings in a very emotionally distraught fashion, you almost feel his anguish and disappointment, his pain....or is it just painful to listen to  'Never Wanted You' is an excellent tune featuring some odd meters and mellotron (always exciting prog embellishments) and finishing the first side is the beautiful title song — 7 and a half minutes of prog bliss, with Mary Zinovieff (possibly related to Peter Zinovieff of E.M.S. London) on synthesizer.
Ξ   'Going For A Quick One' starts off with a decent riff leading into one hard-rockin' tune with more of Solley's synth work — the backing vocals by the 'Gospel Ayres' gives it a commercial touch though. 'The Last Day' is a light tune with some nice flute playing, but lacks excitement, 'Evening of my Life' is a pretty, piano driven ballad and closing track 'Busted In Schenectady' is quite an epic, full of heavy riffing, exceptional guitar playing, and even some shimmering electric violin.
Ξ   A great album. If you love the catchy and melodic Prog "Staircase To The Day" is a perfect album. Not perfect because the songs are great but perfect because the atmospheres are great!!! In my opinion this album deserves increase consideration. Yes, is true, the production not helped this situation, today is only one of the more good 70's Prog albums. But the atmospheres... Ethereal, rarified, sweets... And the songs..? Maybe, I think yhat the songs aren't bad at all. Correctly: The songs are good because wrote for the atmospheres. That are too come for pure case. But this is the magical art of "Staircase To The Day". "Starbright Starlight" is my preferred song. A correctly balance of emotions and Prog. But this is this album. And I conclude this review with a good consideration: "Staircase To The Day" is a dreaming album.
YouTube: http://www.youtube.com/watch?v=_BDkAB8RtHI
Gravy Train biography:
Ξ   Typifying the excesses that have frequently been denounced in their genre, UK progressive rock band Gravy Train recorded a series of albums for Vertigo Records and Dawn Records in the early 70s bedecked in grandiose, conceptual artwork. The group’s core members were Norman Barratt (vocals/guitar; b. 5 February 1949, d. 30 July 2011), Barry Davenport (drums), J.D. Hughes (woodwind/keyboards/vocals) and Les Williams (bass/vocals). Their first, self-titled 1970 album was dominated by Hughes’ flute melodies, which earned the group initial comparisons to Jethro Tull, as well as extended rock riffs. One of the songs, ‘Tribute To Syd’, was an obvious salute to the genius of Syd Barrett. The follow-up collection, which sold poorly, was Ballad Of A Peaceful Man. Despite its relative lack of success, many critics considered it to be far superior to the group’s debut, with its complex arrangements, strong musical values and disciplined vocals attracting particular praise. Though they continued to draw crowds on their extensive UK touring schedule, Vertigo became frustrated with their lack of record sales, leading to a move to Dawn. Second Birth is considered by most to be a disappointing effort, lacking the focus and drive of its predecessor. For their final album, 1974’s Staircase To The Day, the group experimented with Greek folk and classical signatures (notably on the Bach-inspired title track), while Roger Dean supplied the cover artwork. The group utilized a wide variety of collaborators for this album, including Russell Cordwell (drums), Jim Frank (drums), George Lynon (guitar), Pete Solley (synthesizer) and Mary Zinovieff (synthesizer/violin). Original drummer Davenport had now left, and the rest of the band elected to close their career after further moderate sales.
Credits on vinyl:
A1  Starbright Starlight
Drums, Percussion — Jim Frank (2)
Synthesizer — Peter Solley
A2  Bring My Life On Back To Me
Backing Vocals — Bobby Harrison
A3  Never Wanted You
Harp — Jim Frank (2)
A4  Staircase To The Day
Synthesizer — Mary Zinovieff
B1  Going For A Quick One
Backing Vocals — Bobby Harrison, Gospel Ayres
Cowbell — Vic Smith*
Drums — Jim Frank (2)
Synthesizer — Peter Solley
B2  The Last Day
B3  Evening Of My Life
B4  Busted In Schenectady
Backing Vocals — Bobby Harrison, Norman Barrett*, Pat Arnold*
Violin [Electric] — Mary Zinovieff
_______________________________________________________________

The Republic Of Wolves