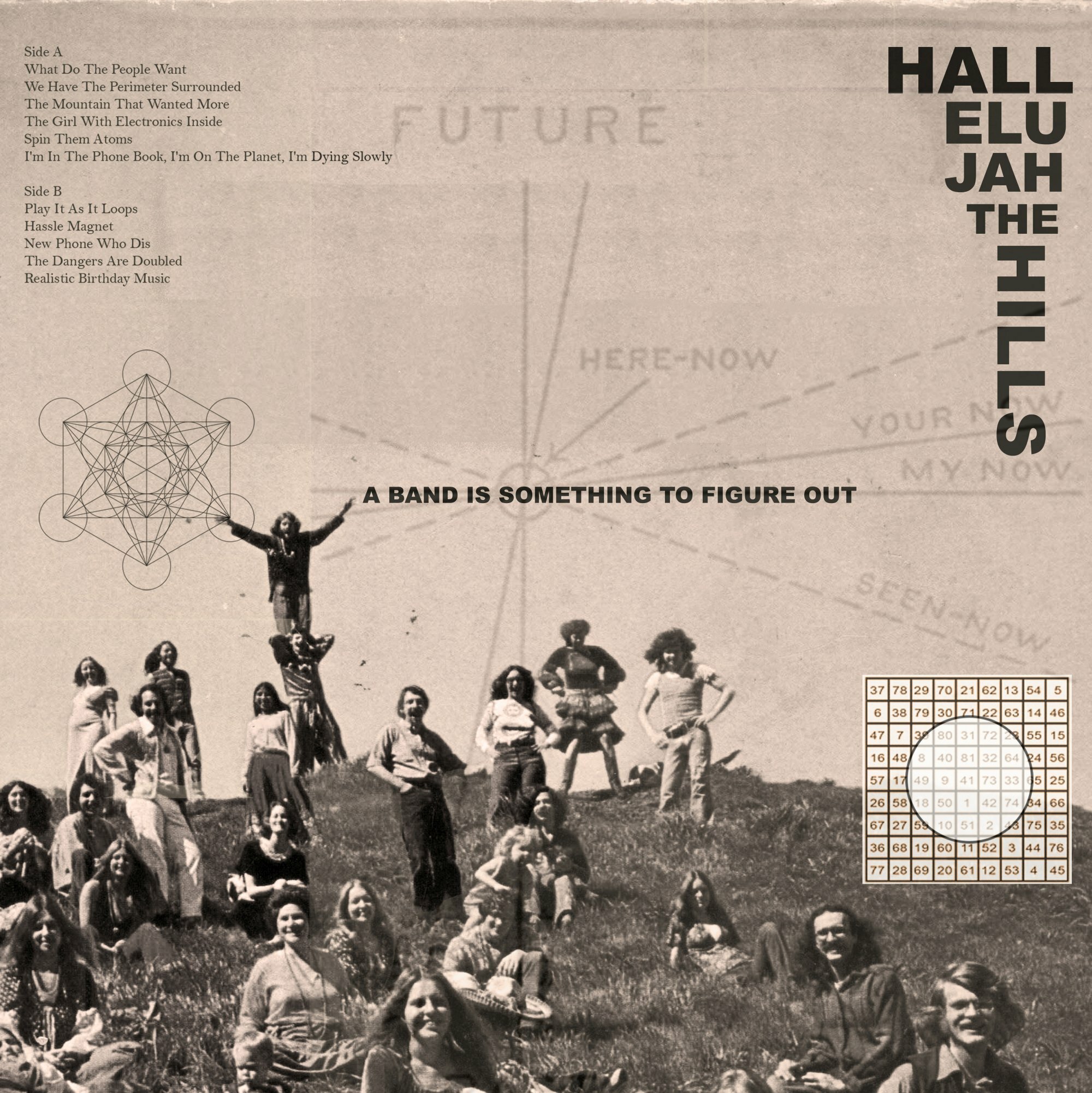 Hallelujah the Hills — A Band Is Something to Figure Out
≡±≡   “Massachusetts indie rock institution Hallelujah The Hills’ [fifth record] is called A Band Is Something To Figure Out, but it could just as easily be called This Is What It Sounds Like When A Rock Band Has It All Figured Out…Rock frameworks that reliably stretch to accommodate subversive, irreverent impulses…The band’s best outing to date.” — Clicky Clicky Music                   Location: Boston, Massachusetts
Album release: April 12, 2016
Recorded: November 2015 at 1809 Studios, Macedon, NY, 1809studios.com
Genre: North American Music Sounds
Record Label: Discrete Pageantry Records
Duration:     44:31
Tracks:
01. What Do the People Want   4:00
02. We Have the Perimeter Surrounded   3:15
03. The Mountain That Wanted More   3:30
04. The Girl With Electronics Inside   4:31
05. Spin Them Atoms   4:34
06. I’m in the Phone Book, I’m on the Planet, I’m Dying Slowly   4:07
07. Play It As It Loops   2:46
08. Hassle Magnet   6:43
09. New Phone Who Dis   4:36
10. The Dangers Are Doubled   3:05
11. Realistic Birthday Music   3:24
Personnel:
≡±≡   Ryan Connelly — Drums
≡±≡   Joseph Marrett — Guitar
≡±≡   Brian Rutledge — Synthesizer
≡±≡   Ryan H. Walsh — Guitar, Vocals
≡±≡   Nicholas Giadone Ward — Bass, Piano
≡±≡   Oh, YOU KNOW everyone sang, including Dave Drago + Jacob Walsh
Credits:
≡±≡   Produced by HTH and Dave Drago
≡±≡   Engineered and mixed by Dave Drago
≡±≡   Studio Assistant: Jacob Walsh
≡±≡   Mastered by Jake Rodenhouse, perfectsoundstudios.com
Press:
≡±≡   “The sound of music without limits” — The Boston Globe
≡±≡   “Criminally underappreciated” — Spin
≡±≡   “Vivid lyrics” + “fist pumping anthems” — Pitchfork
≡±≡   ☆☆☆1/2 — Rolling Stone
≡±≡   “The smartest music you will ever hoist a beer to” — 4/5 ☆’s — Blurt Magazine
≡±≡   “Put on this song, shut up, and kiss someone.” — Noisey
Review
BY MATTHEW FIANDER, 4 April 2016; Score: ********
≡±≡   We last heard from Boston’s Hallelujah the Hills on 2014’s Have You Ever Done Something Evil? an album a mix of deep hooks, clever lyrical turns, and gut~punch feeling. With their follow~up, A Band Is Something to Figure Out, out April 12 on the band’s Discrete Pageantry label, Hallelujah the Hills’ don’t replicate that success, but rather they open up a new set of challenges.
≡±≡   The darker textures and scuffed~up edges of this record make it seem leaner than its predecessor, but these songs are thick with layers. “What Do the People Want” opens the record on a careful, epic build, only for the record to left turn into the shout~and~rumble of “We Have the Perimeter Surrounded”. “The Mountain That Wanted More” and “Spin Them Atoms” are feel like sweet, familiar power pop at first, but they kick up new kinds of dust, clouded in complex layers and tricky melodies.
≡±≡   The second half of the record shows the band taking new chances with tone and pace, stretching out “Hassle Magnet” on a bed of heavily buzzing chords, while “New Phone Who Dis” lets just about every notes echo out into seemingly endless negative space to brilliant effect. Through the record, Ryan Walsh’s lyrics challenge the listener as much as the music does, but like the music he always lures you in with a carefully placed detail (“They’re telling jokes in the ossuary / but the laughs are weak and gaunt”) and a killer chorus.
≡±≡   This is, in short, another great record from Hallelujah the Hills, but not better or worse than any other. To compare the band’s new work with the old is to miss the point. Just check the title of the new record. The band is constantly figuring itself out anew, and this record has an infectious sense of discovery about it as a result. If the band is shifting, this album asks the listener to take a new angle as well, and taking that challenge on yields big rewards. So start here, with this exclusive premiere of A Band Is Something to Figure Out.
Picture: BOSTON’S HALLELUJAH THE HILLS NEW RECORD TURNS ON DARK TONES AND SCUFFED TEXTURES, BUT RARELY DOES AN ALBUM SO CHALLENGING AND DEEPLY LAYERED ALSO DELIVER IMMEDIATE IMPACT.
Discography:
•  2007 Collective Psychosis Begone (Misra)
•  2009 Colonial Drones  (Misra)
•  2012 No One Knows What Happens Next  (Discrete Pageantry Records)
•  2014   Have You Ever Done Something Evil
•  2016   A Band Is Something to Figure Out (April 12, 2016)
Website: http://hallelujahthehills.com/
Vinyl: http://www.re-vinylrecords.com/record-store.html
Facebook: https://www.facebook.com/hallelujahthehills
Bandcamp: https://hallelujahthehills.bandcamp.com/album/a-band-is-something-to-figure-out