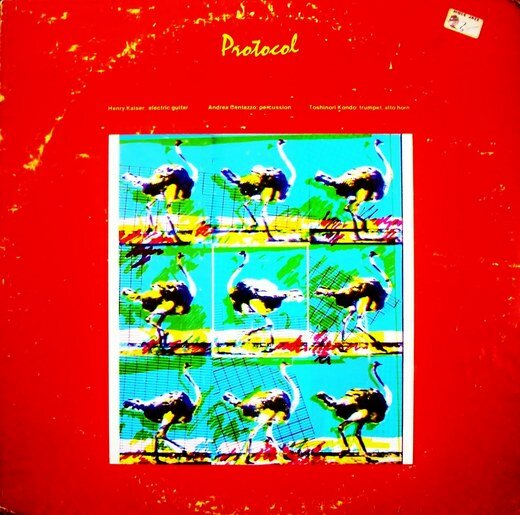 Henry Kaiser, Toshinori Kondo, Andrea Centazzo • Protocol
Metalanguage LP
Album release: 1978
Record Label: Metalanguage ML 102
Description:
An intriguing document by three eccentric masters from the golden age where
free improvised sounds modelled on SME, were spreading World wide and becoming some sort of Lingua franca amongst adventurous souls,and disciples spreading the Gospel of Micro-Free non-conformity..
Nice Chewy listen, even if perhaps it isnt the best work by these guys, Henry was in the process of developing his own trademark almost orchestral, uniquely processed sound (evidenced to a degree on side b), and fully realised on later records like the criminally out of print Aloha, & Outside Pleasure ... (here, particularly on side one, he sounds largely in thrall to his great love of D. Bailey, and what guitarist playing free music isnt at some point?)
Kondo as usual sticks out whatever the context ... one of the most utterly distinctive brass voices of the Era or any Era, a special PRESENCE, in whos phrasing and unique sense of time one can hear echoes of the outrageously Expressive, chimeric Miles Davis on such mid 70's masterpieces, On the Corner, Agartha, & Panagea,
and of course Ictus boss, Centazzo is also quite a riveting, magnetic presence as always.
A language taking shape ... nothing codified or formalised, enjoy!!

Line-up / Musicians:
Electric Guitar [Gibson 355 Guitar, Acoustic 115 Amp.] - Henry Kaiser
Percussion [Premier Drum Set, Cheap Electronics, Ufip Cymbals & Gongs, Etc.], - Andrea Centazzo (tracks: B1 to B5)
Trumpet, Horn [Eb Alto] - Toshinori Kondo (tracks: A1 to A7)
Releases information:
LP: Metalanguage ML 102 (US)
PS: ... ive given this a light de crackle and click , the record is in a condition thats just this side of poor, servicable until the real thing in the form of a proper cd reissue comes along ... i guess, dont hold y'r breath! 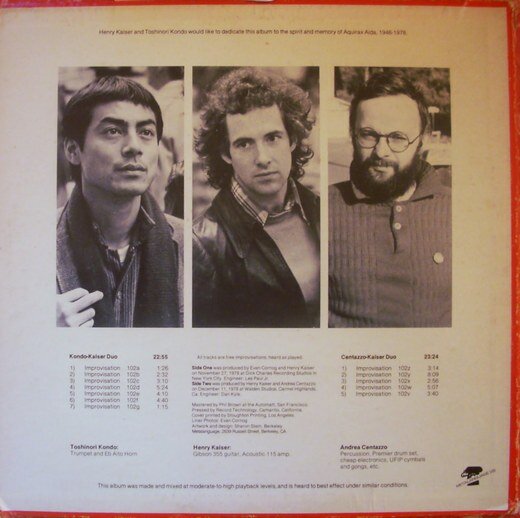 Biography: In an artistic career that spans over twentyfive years, Andrea Centazzo has given more than 1000 concerts and live performances in Europe and the United States, as well as having appeared and performed on numerous radio and television broadcasts. He has recorded over 60 LP's and CD's, and has authored 350 compositions and eight musicology books. His musical endeavors and creative expression range from the sublime to the passionate, from lyric opera to orchestral symphony and solo percussion. He has performed in momentous festivals as soloist of his own compositions or as conductor of symphonic orchestras. Centazzo is a pioneer of contemporary percussion. In the early years, he performed with some of the greatest avant-garde soloists and composers, including J. Zorn, S. Bussotti, S. Lacy, D. Cherry, A. Mangellsdorf, E. Parker, etc. Deservedly, Centazzo has received a number of prestigious music and video Awards (Premio Speciale della Critica Discografica Italiana, USA Downbeat Poll, International Video Festival Tokyo, Prix Arcanal of French Culture, etc.) A doctoral graduate in musicology, he has taught seminars and workshops in Europe and the USA. Since 1983, Centazzo has been dedicated to creating multi-media experiences. This expansion began with an exhibition of his scores rendered as painted ideograms, and evolved into video performances combining both live performance with video images. These efforts culminated in his directing award-winning videos and films. As a soundtrack composer, he unites traditional instrumentation with current technological advances in musical expression through sampling machines and computers. These efforts give a new perspective to the fusion of sound and image through his theatre, television, video, CD rom, and feature film scores. The music of A.C. captures and expresses the rhythm and pulse of life by synthesizing the mystery of Oriental percussive vibrations with the timbral harmonic understanding of contemporary music and the soul of jazz and rock post-culture. A.C. continues to contribute his unique artistic vision to the evolution of contemporary culture. 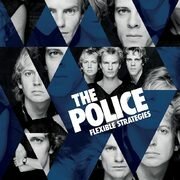