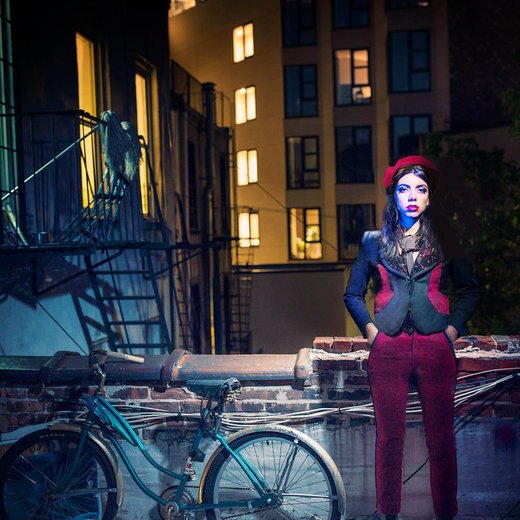 →↔★   With their combative new sound, Alynda Segarra’s roots radicals are leading America’s fight against the right.
→↔★   They can play a cover of Creedence Clearwater Revival’s Fortunate Son and make it sound like Sympathy for the Devil.

© Photo credit: Karlo X Ramos
Born Of Puerto Rico
Location: New Orleans, Louisiana
Album release: March 10, 2017
Record Label: ATO Records
Duration:
Tracks:
01 Entrance     1:43
02 Living In The City [Explicit]     3:17
03 Hungry Ghost     3:26
04 Life To Save     2:57
05 Nothing’s Gonna Change That Girl     3:40
06 The Navigator     3:27
07 Halfway There     2:12
08 Fourteen Floors     4:14
09 Rican Beach     3:32
10 Settle     2:58
11 Pa’lante [Explicit]     5:53
12 Finale     3:22
Editorial Reviews
→↔★   On Hurray for the Riff Raff’s new album ‘The Navigator’ (March 10/ATO Records), Alynda Segarra tells an interwoven, cinematic story of a wandering soul at a crossroads of identity and ancestral weight. It finds a street kid named Navita traversing a perpetually burning city in search of herself. ‘The Navigator’ is a thrilling call to arms that could not come at a more crucial time. It also finds Hurray for the Riff Raff at its own musical intersection, delving deep into the worlds of Latin rhythms, searing rock, and incisive ballads.
Notes:
→↔★   Alynda Lee Segarra of Hurray for the Riff Raff is one of those singular, delightful paradoxes: she’s an unflinching pedagogic narrator who courageously spits fire at the faces of societal oppressions but reveals a heart of gold via her charming lyrical genuineness. She is as graceful as a countryside dame, yet armed with the street smarts of a big~city vagabond. Taking cues from her activist heroes, depression~era protest singer Woody Guthrie and Puerto Rican political poetess Julia de Burgos, her jam~encrusted folk rock too manifests solidarity for the people, by the people. During a night at BRIC Celebrate Brooklyn, as part of the Latin Alternative Music Conference (LAMC) lineup, Segarra clearly demonstrated just that.
Review
→↔★   “The first words still had roots, like a James Brown syllable,” the late New York poet Sekou Sundiata once wrote. He was talking about how language is undergirded with sound, how the beats underneath every sentence intertwine, connecting every tongue from Africa to the South Bronx. In the many albums she’s recorded as Hurray for the Riff Raff, Alynda Segarra has told her own stories through the various idioms of American roots music, mastering folk declarations, country’s laments, and the secret histories embedded in the blues. But Segarra heard something else beneath all the choruses she learned: a rhythmic reality, the history of her own people in shifting time signatures. These word roots are what she uncovers in her rich, courageous new album, The Navigator.
→↔★   Segarra was born and raised in the Puerto Rican Bronx, which serves as the album’s origin point. She embeds the rhythms of the Latinx diaspora throughout this musical narrative, which unfolds like a Broadway musical (the packaging looks like a theater program ~ a nod to Hamilton, perhaps?). For this project, she’s enlisted new collaborators, notably the versatile guitarist Jordan Hyde and several percussionists, including Juan~Carlos Chaurand and Norka Hernández~Nadal. Relating the saga of a particular wandering woman ~ Segarra’s alter ego, Navita Milagros Negron ~ and of a people displaced through exile, segregation and gentrification, The Navigator repositions roots music as an anti~nostalgic tool: a truth~telling device. And it does so through the undercurrents of Cuban son, Puerto Rican bomba, and Nuyorican salsa, interwoven with doo~wop, rock and gospel soul.
→↔★   This doesn’t mean Segarra, who still sings mostly in English, has set aside what she learned from covering Gillian Welch and Townes Van Zandt. She still has a hypnotic way of telling a story, using the circular rhymes around which she wraps her sedimentary alto to relay a mournful knowingness beyond her 29 years. But here she also explores the sass and drama of Motown~style pop, the steadfast grooves of gospel, the streetwise smirk of glam rock. (“Livin’ in the City” is her tribute to Lou Reed’s “Sweet Jane” ~ every rock star needs one.) And she dares to write a real anthem. “Pa’lante,” was inspired in part by the direct~action politics of the Young Lords, whose occupations challenged the status quo in New York and elsewhere in the 1970s; the word means “forward” and was a rallying cry for the Puerto Rican liberationist group. A stately, then disruptive piano line leads Segarra through a series of laments that become battle cries: “I just wanna prove my worth on the planet Earth and be something!” she cries. This sentiment expands to speak for outsiders of all kinds ~ LGBTQ kids, immigrants, women, working class people, the “colonized and hypnotized.” “Pa’lante” is intersectionality shaped by jazz changes and a rock beat.
→↔★   Elsewhere on The Navigator, Segarra weaves together tales inspired by her own life lessons learned “from coast to coast” with images of Nuyorican apartment life (“14 floors of birthing, and 14 floors of dying,” Segarra sings, painting a gorgeous tenement image), refugee boat journeys, women’s street survival, love messed up and selfhood reclaimed. Her characters are always in motion. The doo~wop strains that open the album put us in the alleyways where Latinx kids sang and fought for their pride in the 1950s; the ominous “Rican Beach” surveys those same neighborhoods, wrecked by urban renewal. “I’ve been called allegedly free,” she sings in the moody “Nothing’s Gonna Change That Girl.” The line works as a personal testimony of a complicated life, and a statement about the realities faced by countless uprooted Americans.
→↔★   You can still hear us in the piece of a beat, or in that music made from scratch,” Sundiata said in his poem, about his own ancestors, whose fates have intertwined with Segarra’s. She is challenging listeners to uncover those lost voices, making music that remembers their names. This is the essence of roots music, feeding the future, insisting on staying alive.
Also:
Kitty Empire, Score: ****
→↔★  https://www.theguardian.com/music/2017/jan/22/hurray-for-the-riff-raff-sebright-arms-london-review
Interview
By Isabela Raygoza  |  July 19, 2016  |  11:37am
→↔★  Photo by Karlo X Ramos
→↔★  https://www.pastemagazine.com/articles/2016/07/hurray-for-the-riff-raff-its-a-revolutionary-thing.html
Website: http://www.hurrayfortheriffraff.com/
Facebook: https://www.facebook.com/hurrayfortheriffraff/
→↔★→↔★______________________________________→↔★→↔★