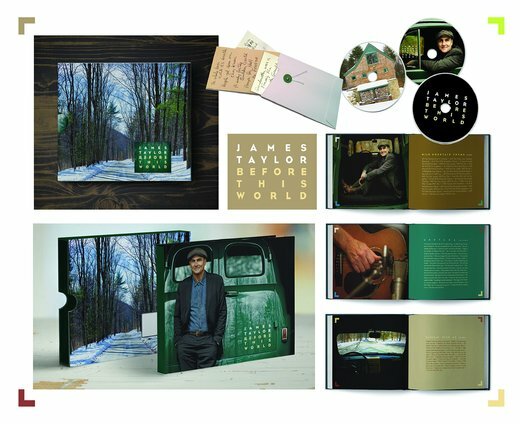 •≡•  The archetype for the gentle, inward–looking singer/songwriter movement of the early '70s.

AWARDS:
Billboard Albums
•≡•  2015 Before This World The Billboard 200     #1
•≡•  2015 Before This World Top Canadian Albums     #10
•≡•  2015 Before This World Top Digital Albums     #1
Billboard Singles
•≡•  2015 Today Today Today Adult Contemporary     #29
AllMusic Review by Stephen Thomas Erlewine;  Score: ***½
•≡•  James Taylor never sets his guitar down — he spends a good portion of every year satisfying faithful audiences — but he did rest his pen, opting to sit out the 13 years following the release of 2002's October Road. He kept busy with covers albums and Christmas records, but Before This World finds Taylor returning to writing, a habit he abandoned about a decade prior. Often, Before This World contains echoes of the first decade of the new millennium — there is a passing reference to 9/11 in a song about Afghanistan and a love letter to the Boston Red Sox's 2004 World Series win — but Taylor wrote these all in a batch, then recorded them at home with his touring band. Such quick progress gives the record a cozy, unified feeling but, unlike some latter–day JT records, it's not too comfortable. Taylor is randy enough to sing about some "first–class poontang" on the nicely grooving "Stretch of the Highway," a song more notable for a mellow vamp worthy of Steely Dan, the first suggestion there's a bit more variety here than on a typical Taylor platter. He'll ease into his trademark laid–back pop, opening the proceedings with "Today Today Today" and brightening up the midsection with the happy "Watchin' Over Me," but as the record comes toward its conclusion, he takes detours into traditional English folk on "Before This World/Jolly Springtime" and "Wild Mountain Thyme," while etching out a cinematic protest song in "Far Afghanistan." When a record runs only ten tracks and 41 minutes, these departures amount to nearly half the record and turn Before This World into something unexpected: a record as relaxed as the average James Taylor album but one that's also riskier and richer, the right album for him to make at this date. •≡•  http://www.allmusic.com/

REVIEW
BOSTONGLOBE.COM — For James Taylor, Fenway the ‘ultimate hometown’ show. August 7, 2015
By James Reed
•≡•  It’s two hours until showtime, and James Taylor is finally sitting still in his dressing room at Fenway Park on Thursday afternoon. It’s already been a nonstop day with sound checks and meet–and–greets, there’s probably no time for a nap, and he’s wondering how the concert will go.
•≡•  This will be a big night for him: A native son is, at long last, headlining one of Boston’s most hallowed venues — the place that inspired “Angels of Fenway,” a song from his new album, “Before This World.” The concert, with Bonnie Raitt sharing the bill, sold out in a matter of hours. But he’s not nervous, necessarily.
•≡•  “It’s just that it’s one of these ultimate hometown shows,” Taylor says. “Everybody but my mom is going to be here from my family.
•≡•  “It’s funny,” he explains. “It’s hard to play stadiums with music that is as intimate as mine is. There’s a tendency to make everything big. And I think we’re just going to depend on having a great sound system and the video projections. I don’t really have any way to play to . . . what is the capacity here?”
•≡•  Thirty–five thousand.
•≡•  “Yeah, to 35,000 people,” Taylor says. “The largest audience that I can sort of feel like I’m relating to is about 5,000. I often play to 10,000 and 15,000, but it’s like anything over 5,000 is the same. There’s not another quantum level for me to approach. But we’ll see how it goes in this large of a place.”

© NEW YORK, NY — JUNE 22: Singer–songwriter James Taylor speaks onstage during iHeartRadio ICONS with James Taylor presented by P.C. Richard & Son at iHeartRadio Theater on June 22, 2015 in New York City. (Photo by Cindy Ord/Getty Images for iHeartRadio)
•≡•  That’s James Taylor for you. At 67, he’s one of the most beloved and influential singer–songwriters of all time — and still eager to please and connect with an audience that has stuck with him since the late 1960s.
•≡•  On Thursday, Taylor agreed to let a Globe reporter and photographer shadow him and his entourage for the afternoon before taking the stage.
•≡•  First up is sound check, with the full band running through classics such as “How Sweet It Is (To Be Loved by You)” and “Steamroller” and “Shed a Little Light,” an underappreciated hymn from 1991’s “New Moon Shine.”
•≡•  Around 2 p.m., Raitt emerges from stage left, her thick mane of flame–red locks blowing in the breeze as she hugs everyone in the band. “Man, this is pretty historic,” she announces, surveying the blue skies and vast rows of seating.
•≡•  She and Taylor have decided to do a few numbers together, and this is their first rehearsal. “Knock on Wood” sounds terrific, funky in a way that’s more attuned to her style than his.
•≡•  During her own sound check later, she’s not too shy to correct Taylor when he flubs a line of “Thing Called Love.” “You need to change it to, ‘you ain’t no Princess Charming,’ ” she reminds him and he nods and writes it down on the lyric sheet. “That was really great,” she raves when they finally nail it on the second try.
•≡•  Back on her tour bus, Raitt admits Taylor was a big influence. “When James came on the scene, it was a whole different game,” Raitt says. “He is a unique avatar for the singer–songwriter. We all fell in love with him, too. I won’t lie: We all thought he was dreamy . . .”
•≡•  After the sound check, it’s time to meet the smattering of people who have filled a few rows in the otherwise empty ballpark. Most of them are survivors of the Boston Marathon bombings, including Jeff Bauman, who lost both his legs and was heralded as a hero who identified one of the bombing suspects.
•≡•  The bombing struck a deep nerve with Taylor; he was one of the first big acts to sign on for the Boston Strong benefit concert that raised money for the One Fund in 2013. He has since fostered a relationship with some of the survivors, corresponding through e–mail and sometimes at his concerts.
•≡•  With his wife, Kim, by his side, Taylor navigates the crowd slowly, determined to give as many hugs and hear as many stories as possible. Celeste Corcoran of Lowell is looking him straight in the eye as she points to her two prosthetic legs. She’s getting better, she says, and he listens in between signing hats and posters.
•≡•  Talking to Kim a few minutes later, Corcoran expresses her gratitude.
•≡•  “It might seem like a little gesture, but it’s huge. We appreciate it, and we love you guys,” Corcoran tells Kim, who starts to tear up as she pulls away from an embrace.
•≡•  Next up is a presentation from the top brass at the Red Sox and Live Nation, the show’s promoter. Don Law gives Taylor a mounted home plate — “That’s a real home plate, not the kind you can buy at Dick’s Sporting Goods,” Law says — along with a framed photo of the scoreboard with the names of Taylor and Raitt.
•≡•  These days, touring is a family affair for Taylor. Kim, whose warm demeanor suggests she’s never met a stranger, is one of his backup singers. Henry, one of his two young twin sons, has also sung backing vocals for his father. And brother Livingston Taylor shows up at Fenway with a guitar in a soft case on his back, offering a hearty “Hey, guys!” before hugging his sibling.
•≡•  Taylor credits his wife for his connection to Fenway. Although he grew up in Massachusetts, he didn’t start coming to games regularly until around 1996. At the time, Kim was working for the Boston Symphony Orchestra, whose music director, Seiji Ozawa, was a huge Sox fan — and still is, Taylor reports.
•≡•  “When the curse of the Bambino was relieved in 2004, I knew I wanted to write about it,” he says, adding that he wrote “Angels of Fenway” before he had booked his performance at the ballpark. “I had never written a song about baseball, and I actually don’t write many songs that I set out to write. Usually I’m just following the song.”
•≡•  “My dad says he brought us to Fenway when we were really little,” he says. “We left Boston for North Carolina when I was 3. So I have this sense that he took us to a game just before we left town — but I can’t remember it at all. But I’m pretty sure I’ll always remember tonight.” •≡•  https://www.bostonglobe.com/
Website: http://jamestaylor.com/
Twitter: https://twitter.com/jamestaylor_com
Facebook: https://www.facebook.com/JamesTaylor
YouTube: https://www.youtube.com/user/jamestaylorvideo

Biography (1/2)
•≡•  James Taylor’s music embodies the art of songwriting in its most personal and universal forms. He is a master at describing specific, even autobiographical situations in a way that resonates with people everywhere. For more than forty years Taylor has been a compass for his fans, articulating moments of pain and joy, and letting his listeners know that they are not alone.
•≡•  As a recording and touring artist, Taylor has set a precedent to which countless young musicians have aspired. His warm baritone is among the most recognized voices in popular music and his distinctive style of guitar–playing has been enormously influential. He has sold over 100 million albums throughout his career, beginning in 1968 when he was signed to The Beatles’ Apple Records. In 1971, Taylor was featured on the cover of Time magazine, heralded as the harbinger of the singer–songwriter era. His voice has been a constant in a changing world for his first generation of fans and their children.
•≡•  Taylor’s songs have had a profound influence on songwriters and music lovers from all walks of life: “Fire and Rain,” “Country Road,” “Something in the Way She Moves,” “Mexico,” “Shower the People,” “Your Smiling Face,” “Carolina In My Mind,” “Sweet Baby James,” “Don’t Let Me Be Lonely Tonight,” “You Can Close Your Eyes,” “Walking Man,” “Never Die Young,” “Shed a Little Light,” “Copperline,” “Enough to be On Your Way,” “Caroline I See You,” and many more. He has earned 40 gold, platinum, and multi–platinum awards and five Grammy Awards for a catalog that runs from James Taylor (1968) and Sweet Baby James (1970) to Hourglass (1997) and October Road (2002). His first Greatest Hits album earned the Recording Industry Association of America’s elite Diamond Award, given for sales in excess of 10 million units in the United States. For his artistic accomplishments, Taylor was honored with the 1998 Century Award, Billboard magazine’s highest accolade, bestowed for distinguished creative achievement.
Grammy Awards:
•≡•  1971: Best Pop Vocal Performance, Male, "You've Got a Friend"
•≡•  1977: Best Pop Vocal Performance, Male, "Handy Man"
•≡•  1998: Best Pop Album, Hourglass
•≡•  2001: Best Pop Vocal Performance, Male, "Don't Let Me Be Lonely Tonight"
•≡•  2003: Best Country Collaboration With Vocals, "How's the World Treating You" with Alison Krauss
•≡•  2006: Grammy Award–sponsored MusiCares Person of the Year. At a black tie ceremony held in Los Angeles, musicians from several eras paid tribute to Taylor by performing his songs, often prefacing them with remarks on his influence on their decisions to become musicians. These artists included Carole King, Bruce Springsteen, Sting, Taj Mahal, Dr. John, Bonnie Raitt, Jackson Browne, David Crosby, Sheryl Crow, India.Arie, the Dixie Chicks, Jerry Douglas, Alison Krauss, and Keith Urban. Paul Simon performed as well, although he was not included in the televised program; Taylor's brother Livingston appeared on stage as a "backup singer" for the finale, along with Taylor's twin boys, Rufus and Henry. 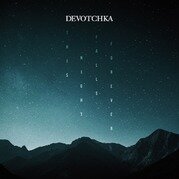