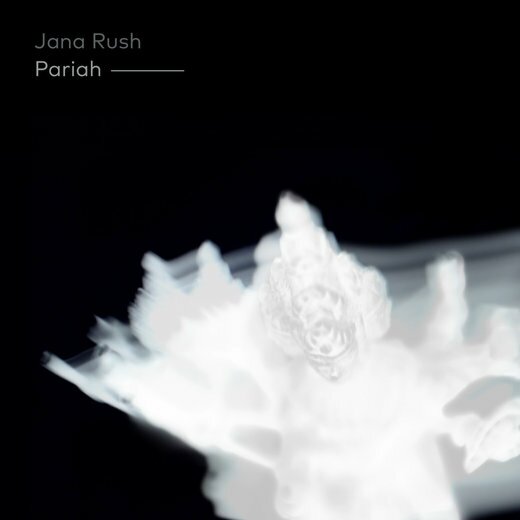 •→√•→    JARu is the performing name of Jana Rush. Chicago born and raised Jana started DJing at the tender age of ten, and started producing just three years later. •→√•→    Influenced by Robert Armani, Lester Fitzpatrick, Cajmere, DJ Milton, and DJ Deeon
Location: Chicago, Illinois
Album release: July 14th, 2017
Record Label: Objects Limited
Duration:     44:06
Tracks:
01 Midline Shift     3:20
02 Beat Maze     2:46
03 Divine     5:45
04 ??? ??     3:27
05 Break It     3:28
06 No Fuks Given     4:32
07 Old Skool     3:32
08 Rapid Fire     3:38
09 Acid Tek 2     3:39
10 CPU     3:03
11 Chill Mode     3:51
12 Frenetic Snare     3:03
Review
By Kevin Lozano, July 25th, 2017 / Score: 7.9
•→√•→    Twenty years into her career, after a hiatus of more than a decade, the Chicago footwork producer finally releases her debut album, taking apart her hometown’s club genres and recombining them in captivatingly original ways.
•→√•→    Many DJs in Chicago get started at a remarkably young age, and Jana Rush was just 10 when she first started mixing. Obsessed with Chicago’s house music stations, she called up WKKC 89.3 FM one day to ask how she could become a DJ. Her training began at those studios, where, under the guidance of local legend Jam Master K and the producer Gant~Man, she learned how to mix. By the time she was 13 she had started producing, and before she turned 18, she had already released a split 12” with ghetto house scion DJ Deeon and a solo record called Wicked. She counted Paul Johnson as a mentor and DJ Rashad as one of her peers, but the realities of making a living would take her away from music for more than a decade.
•→√•→    Pariah, Rush’s debut LP, arrives over 20 years since her first release, and in that time she’s been a firefighter, a CAT scan technician, and a chemical engineer at an oil refinery. Last year, she emerged from her hiatus to release the MPC 7635 EP, which introduced her particular take on footwork. Rather than the smoother, soul~infused style practiced by Rashad, RP Boo, and their cohort, her acrobatic drum programming and stark industrial atmospheres are more closely aligned with Jlin.
•→√•→    Where Rush differs from most of her peers is the decidedly drowsy nature of her version of footwork. All these songs move at characteristically rapid BPMs, but Rush’s production isn’t focused so much on speed as it is on atmosphere: A chunk of the tracks on Pariah are closer to very fast ambient than anything approaching dance music. Songs like “Divine,” “CPU,” and “Chill Mode” are shorn of anything more than a synthesizer, an unfussy vocal sample, and drumming. With those tools, she’s able to create seriously calming moments on Pariah, which particularly stand out in between the more furious pieces. The blistering, gabber~inspired rhythms of “No Fuks Given” and the appropriately titled “Frenetic Snare” are real workouts, and Rush is keen on offering some form of comedown.
•→√•→    While her label and the press have billed her album as a footwork record, Rush’s relationship with the genre, and with Chicago dance music in general, is much more fluid. Perhaps her most defining aspect as a producer is her ability to melt things down into their most concentrated forms — pulling out the pulse of acid house or the shuffle of jungle, for example — and marrying them together in her songs. Take “??? ??,” the album’s most confounding song. She builds the entire track from what sounds like a rusty pipe being played like a flute; its rinky~dink chords snake around languid drum rolls, church pianos, and a brass band.
•→√•→    Yet, as a result of the wide breadth of her style, the album can feel more or less shapeless, as each track flows into the next, trying new tricks and tropes on for size. “Break It,” the track that immediately follows “??? ??,” is a more classically inclined take on footwork and juke — just an increasingly speedy drum line cushioned by repetitions of the song’s title. Just a little later we get “Old Skool,” which, in line with its name, is retro house with soul samples and saxophones. But she’s such a studied and precise producer that even these more straightforward pieces are still arresting. As a result, Pariah, stylistically speaking, is more like a historical survey of dance music: Across its 12 tracks, Rush doesn’t so much break apart genre as reconstitute it in her own image.   •→√•→    http://pitchfork.com/
Bandcamp: https://jaru.bandcamp.com/album/pariah
_____________________________________________________________