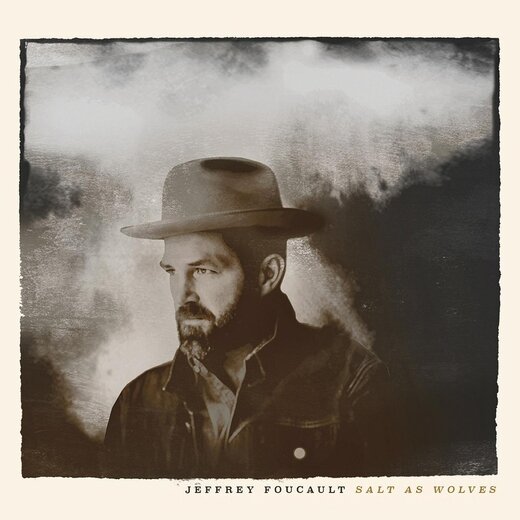 Jeffrey Foucault — Salt As Wolves (October 16, 2015)
♣  “After releasing a handful of sparse, stark solo albums, singer/songwriter Jeffrey Foucault began widening his sound, piecing together his own brand of textured, midwestern Americana laced with pedal steel, accordion, organ, and electric guitar. He adds some serious muscle to that sound with Calvacade, his second album with the rock band Cold Satellite” — AMERICAN SONGWRITER

© Joseph Navas
Birth name: Jeffrey Foucault
Born: January 26, 1976
Location: Whitewater, Madison, Wisconsin
Album release: October 16, 2015
Record Label: Blueblade Records
Duration:     43:03
Tracks:
01. Des Moines      3:12
02. Rico      4:10
03. Left This Town      3:08
04. I Love You (And You Are A Fool)      2:26
05. Blues For Jessie Mae      3:51
06. Slow Talker      3:55
07. Jesus Will Fix It For You      4:39
08. Oh Mama      4:18
09. Hurricane Lamp      2:57
10. Strange Heat And Thunder      3:12
11. Paradise      3:15
12. Take Your Time      3:54
♣  Jeffrey Foucault’s songs are well worn, like your favorite boots, caked with dirt and dust, weathered by years of abuse and traveling long and winding roads. Those songs are the best kinds of songs. The ones with deeper meanings, with stories told over tired post–show load outs or late night drives. The kinds of things that only a certain breed of people see and experience. The stuff that seeps into the cracks of old wooden barroom floorboards and only peeks its head out in the nighttime.
♣  There are bluesy tinges that mark and stain the corners of the songs contained on Salt As Wolves. Foucault laments about people and places he has seen over blues transitions that are rough around the edges in the very best way. Letting the human element of his stories truly shine through beautifully. A dark bar with a few of the regulars there to wet their palettes, perhaps unaware of the genius that is unfolded through an old PA in the corner.
♣  ‘You Are A Fool’ is a slow burning waltz. A delicate dance about a delicate love and how it may be hard to give up regardless of circumstance. It just hovers there and you can’t turn around. Surrounded by a cloak of the wisps of smokiness that Foucault’s voice sings out in.
♣  ‘Rico’ is perhaps my favorite of the bunch, which is saying a lot for the track. It has a dirty entry point, gritty and soulful, unapologetic. “I barely knew him / he was your good friend / and I think about him, every now and then / how all the real ones die with nothing / half of the time”. A song about a familiar character we all have meet in dark lit rooms An infectious groove that stays with you long after listening.
♣  The singer–songwriter is an authority when it comes to purposing his voice best for the mood of each moment of a particular song. Commanding when it needs to be and relaxed, purposeful and tentative, reluctant to create tension at times. Whether he is singing out strong or simply chanting out a repeated phrase calmly it is powerful in how he delivers each and every word.
♣  While it came to me a bit late in the year, I will proclaim now that this record is landing in my top 3 for 2015. It checks every box and hits every target. Intelligent, pensive, and haunting. This collection is song after song of sincere but tough stories, portraits of genuine people, interesting landscapes, and an invitation to experience it if you just let it in, brilliant and real.
♣  Konce vašich skladeb jsou velmi unikátní. Příkladem je “Heart to A Husk.” Jak důležitá jsou zakončení?
♣  Nemyslím si, že mám hluboce artikulovanou teorii o tom, jak písně mají skončit, ale většinou je to dobrý způsob, jak se dostávají do povědomí. To je vždycky dobrý trik — je to jako chůze po schodech dolů ve tmě. Myslíte si, že bude ještě jeden krok, ale už tam není. Rád si myslím, že to může přitáhnout lidi k pozornosti a pak mají tendenci věnovat větší pozornost tomu poslednímu slovu.
INTERVIEW
BY JOEL BARRETT, SEPTEMBER 8, 2015
♣  http://nodepression.com/article/jeffrey-foucault-salt-wolves-more-blues-record
PUBLICITY CONTACT: Jeff Kilgour, The Syndicate
Website: http://www.jeffreyfoucault.com/
PRESS:
♣  “Contemporary and Timeless.” — New York Times
♣  I first saw Foucault play in a little Missoula theatre years ago, when many of us who grew up spinning our elders' albums — Townes and Dylan, John Prine and Greg Brown — wandered around dolorously wondering when the next real songwriter would come along. Stetson sweaty, that little vagabond spark in his eye, he spun out a long Beam–fueled set and when it was over I walked out into the warm rain and thought, Damn. So that’s where he’s been. Since then Foucault has given American poetry some of its most vital lines and his musical searchings have become touchstones of density and durability. On this new record — his most poignant, honest, even scathing — his cry is a belt of pure blue Wisconsin lake ice with a back of December sunlight angling through bare limbed birches. Not so much penned as lived, these songs — about a show played perfectly to an empty bar, the real ones who die with nothing half the time — offer listeners that rare artistic combination of a voice and a world. And while there’s nothing not lonely about these songs, you can’t hear them and feel remotely alone. Here is our hurricane lamp, the heart whose flame won't go out, whatever the wind. Hold it close. — Chris Dombrowski (from the liner notes to SALT AS WOLVES)
DISCOGRAPHY
♣  Salt as Wolves (To be released October 2015)
♣  Cold Satellite: Cavalcade (2013)
♣  Horse Latitudes (2011)
♣  Cold Satellite (2010)
♣  Seven Curses (2010)
♣  Redbird Live At The Café Carpe (2010)
♣  Shoot The Moon Right Between The Eyes (2009)
♣  Ghost Repeater (2006)
♣  Stripping Cane (2004)
♣  Redbird (with Peter Mulvey & Kris Delmhorst, 2003)
♣  Miles From The Lightning (2001)
♣  ♣  ♣  ♣  ♣  ♣  ♣  ♣  ♣  ♣  ♣  ♣  ♣  ♣  ♣  ♣  ♣  ♣  ♣  ♣  ♣  ♣  ♣  ♣  ♣  ♣  ♣  ♣  ♣  ♣