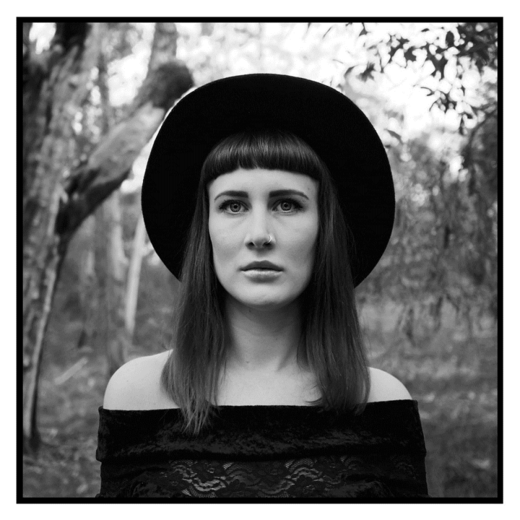 Jemma Nicole — My Darkest Hour (24th June 2016)
Location: Melbourne, Victoria, Australia
Album release: 24th June 2016
Record Label: Dripping Moon Records
Genre: Dark Country, Alt Country, Americana
Duration:     40:56
Tracks:
01. Too Late to Save My Soul     4:37
02. Only a Man     3:43
03. Guilty and Free     3:55
04. The Killing of Me     3:56
05. My Darkest Hour     4:10
06. Dance with the Devil     4:47
07. Perfume, Cigarettes and Wine     4:30
08. Whiskey Shivers     3:36
09. If I Had a Gun     4:25
10. Jolene (Live)     3:17
℗ 2016 Jemma Nicole
Review
Chris Familton, May 17, 2016 by DOUBTFUL SOUNDS / Score: 7.5
♣   Australia has always excelled at producing dark and gothic–influenced music. Nick Cave is the obvious progenitor but many others have explored the darker corners of sin and salvation and Melbournian Jemma Nicole has done just that with her debut collection of folk and country noir songs.
♣   There’s a stately waltz and sway to many of the songs on ‘My Darkest Hour’. Mood is everything and she certainly imbues the music with the right amount of twang, organ, strings and funeral percussion, avoiding her songs descending into sombre dirges. The balance is there as she sings of doomed souls, the demon drink and temptation. She also, impressively, finds a stark and lonely desperation in Dolly Parton’s ‘Jolene’.
♣   ‘Guilty and Free’ and ‘If I Only Had A Gun’ shine some musical light and provide respite from the even slower, shuffling songs but really, the reward of this album is its dark beauty and the way Nicole has created a thematic consistency — like a leather–bound and well–thumbed book of tales from the turn of the century. ♣   https://posttowire.com/
About:
♣   Haunting and beautiful, Jemma Nicole’s gritty, country noir is born from a love of sad songs and the darker side of Americana. Imagine Nick Cave and Hope Sandoval on a double date with Glenn Danzig and King Dude with Johnny Cash waiting the table. You’re getting close.
♣   After a sell out album preview show in September last year, the first single from Jemma’s debut album ‘Too Late To Save my Soul’ will be released on 6th May. A dark and demanding song, questioning those who deny some their right to redemption, the track features special guest, drummer Jorma Vik of The Bronx and Mariachi El Bronx. Jemma approached Vik and sent an acoustic version of the song to LA and after falling in love with Jemma’s songwriting and dark molasses voice, he brought his well known playing to the project.
♣   The debut album, ‘My Darkest Hour’, due for release in June 2016, is her first length release since her 2013 EP ‘Kill My Ghost’. Recorded with Simon Moro of Ninetynine100 (Lanie Lane, Lisa Miller, Vance Joy) at Black Pearl Studios, the album features Joshua Barber (Gotye, Archie Roach) on drums, TK Reeve (Tom Dockray) on bass, Hannah Foley (Lulu and the Page Turners) on violin, Fabian Hunter (Baby Blue, Maddy Leman, Coastbusters) on guitar, Billy Mathieson on keys. The album also includes a co–write with local songwriter Lachlan Bryan (Lachlan Bryan and the Wildes) and a song written by Melbourne Americana star, Gretta Ziller as well as a cover of Jemma’s favourite Dolly Parton tune ‘Jolene’ as a bonus live studio acoustic version.
♣   Jemma has been an integral part of the Melbourne Americana scene since 2010. She was invited to perform at the Americana Festival in Nashville in 2014, playing at the famous Bluebird Cafe. She performed at the Tamworth Country Music Festival in 2015 and returned as part of the Deep Down South Melbourne tour group in 2016. She is a member of the If You See Her, Say Hello choir who performed two sold out shows at Melbourne Fringe Festival 2015 and recently featured at the Adelaide Fringe Festival Spiegeltent in 2016. With her full band sound and a dynamic debut album on it’s way, Jemma is planning an Australian Tour for 2016 and European Tour early 2017.
Website: http://www.jemmanicole.com/
Twitter: https://twitter.com/jemmanicole
♣♣♣♣♣♣♣♣♣♣♣♣♣♣♣♣♣♣♣♣♣♣♣♣♣♣♣♣♣♣♣♣♣♣♣♣♣♣♣♣♣♣♣♣♣♣♣♣♣♣♣♣♣♣♣♣♣♣♣