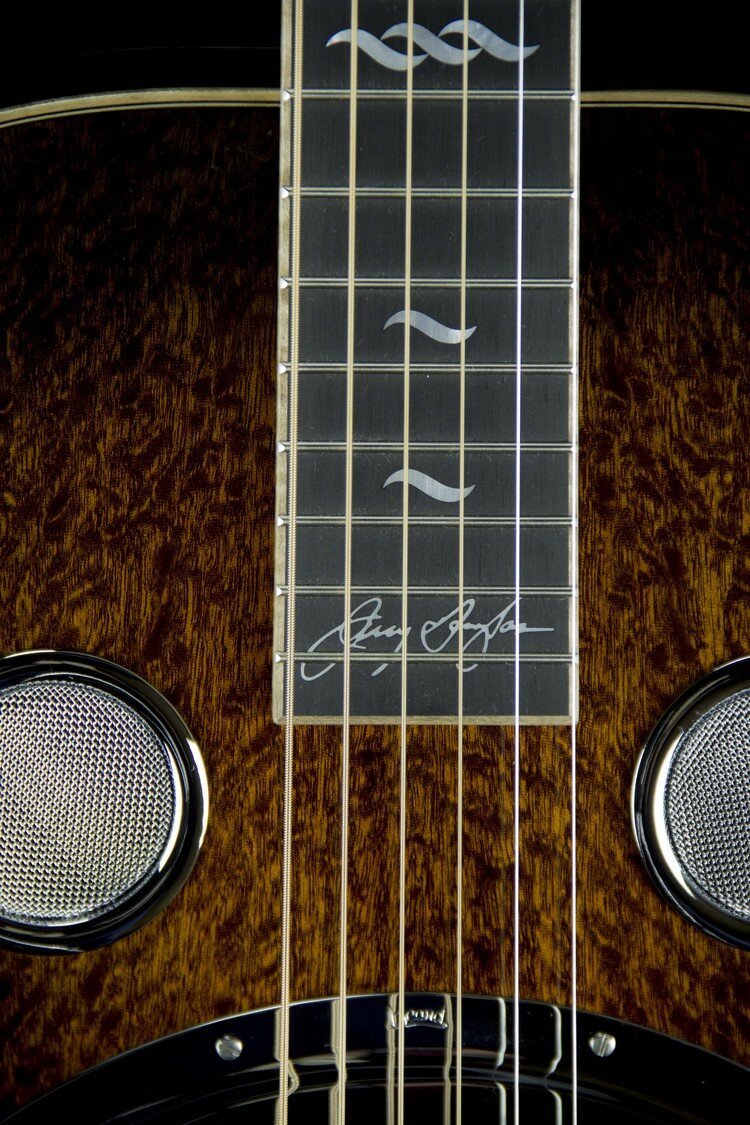 •••    “You play a new guitar, then you play an old one, and they just have a sound. But [the vintage Dobros] can’t compete with the new instruments that are on stage,” Douglas enthuses.
•••    “It never was a real loud instrument. Josh Graves would throw it right up into the vocal mic, the loudest mic onstage. I always had trouble playing old Dobros on stage with J.D. Crowe and bands like that until I started getting into the hybrids, when guys like R.Q. Jones started making guitars, then Scheerhorn and Paul Beard. Those are just the best out there. They’ll serve you well in any genre of music. But the old Dobros aren’t built for that. They’re plywood guitars — they’re thin, they’re light, they won’t take the beating that you have to give them — it’s a very physical business!”
•••    This article originally appeared in VG October 2013 issue. All copyrights are by the author and Vintage Guitar magazine. Unauthorized replication or use is strictly prohibited.

© Photo credit: Rusty Russell
•    (LEFT TO RIGHT) This Fender Custom Shop square~neck Strat lap steel was built by Chris Femming and Donnie Wade. On Traveler, Douglas played a similar square~neck Telecaster made by Fred Stuart and ran it through a Marshall stack. “It was like going to the amusement park!” he says. This ‘36 Dobro Model 27 had been stored under a bed for decades. Douglas found it online and his wife bought it as a gift. Douglas calls this rare early~‘30s Dobro double cyclops “Sonnyboy.”

© Photo credit: Rusty Russell
•    (LEFT TO RIGHT) This Slingerland May Bell Cathedranola has a spider bridge; most have a resonator cover, but no cone — likely to get around National~Dobro’s patents. This Tim Scheerhorn L model has tuners mounted atop the tailpiece. Douglas used this Scheerhorn L~body when he began playing with Alison Krauss.

© Photo credit: Rusty Russell
•    (LEFT TO RIGHT) This Ivan Guernsey resonator is fitted with a Guernsey’s Hipshot tailpiece that works like a B~bender on multiple strings. Douglas found this 1919 Weissenborn being used as a planter at his in~laws’ home. “They’re works of folk art, but this guitar actually sounds amazing,” Douglas said of this Larry Pogreba custom, which has a resonator cover fashioned from a vintage Chevy hubcap and inlays from an Elvis medallion and other old coins (RIGHT). “It’s hollow all the way up to the nut, like a Weissenborn.” It’s the first thing listeners hear on Traveler and it is used extensively throughout the album. •    http://www.vintageguitar.com/
Website: http://www.jerrydouglas.com/
Twitter: https://twitter.com/JerryDouglas
Facebook: https://www.facebook.com/jerrydouglasband
Hey Joe video: https://www.youtube.com/watch?time_continue=1&v=F_WzLzlm2NU