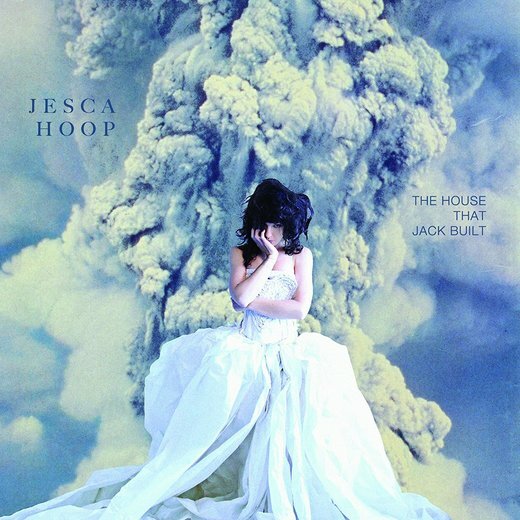 Jesca Hoop — The House That Jack Built (June 25, 2012)
••    Singer/songwriter Jesca Hoop is a nearly unclassifiable talent whose songs range from outsider folk to indie rock.
••    “There is a very particular kind of thrill when an artist who has mastered the pretty and the clever begins to seriously explore the power of anger, and that is what seems to be happening here. There are some fine, powerful rockers here, but for me the core of the album is the brooding, atmospheric “Deeper Devastation” where it admits, with angry resignation, that “you cannot trust a human being to Do the Right Thing.” No you can’t, but sometimes, somewhere, a human being does something that is not only Right, but Amazing. Maybe that’s better, who can say?” — P. Perkins
Location: Manchester, UK
Album release: Jun 25, 2012
Record Label: Republic of Music
Runtime:    39:40
Tracks:
01 Born To    3:45
02 Pack Animal    2:37
03 Peacemaker    4:43
04 Hospital (Win Your Love)    3:48
05 The House That Jack Built    4:13
06 Ode To Banksy    4:06
07 Dig This Record    4:01
08 D.N.R.    4:16
09 Deeper Devastation    4:47
10 When I’m Asleep     3:23
Credits:
••    Tony Berg Contribution, Engineer, Producer
••    Lionel Darenne Engineer
••    Aga Debiec Cover Photo
••    Nicole Eva Emery Vocals
••    Shawn Everett Contribution, Engineer, Mastering, Mixing, Producer
••    Beth Höeckel Artwork
••    Cornelia Irmen Contribution
••    Melanie Knott Layout Design
••    Blake Mills Primary Artist, Producer
••    Paul Mortlock Engineer
••    Tash Willcocks Layout Design
Description:
♠ Hoop was born in Northern California to Mormon parents. She grew up singing traditional folk tunes in four part harmony. She broke away from her background, becoming a homesteader in the wilderness areas of Northern California and Wyoming.
♠  She also worked in the remote mountains of Arizona with a rehabilitation program for children.
♠  Tom Waits described Jesca thus: “Her music is like going swimming in a lake at night.” The Los Angeles Times considered Hoop one of ten Southern California artists that are “new and notable in 2007.” Jesca Hoop’s story is a fascinating one. After being given an early career push by Tom Waits, the songwriter left her California home a couple of years ago and relocated to Manchester. Hunting My Dress, Hoop’s first post~States release, was a fascinating collection of distorted folk-rock (often more rock than folk) that frequently seemed to dip into the occult.
♠  Her latest full length, The House That Jack Built is a co~production between Jesca Hoop and three other producers — “a drop of blood in the can from each of us rendered a more radical sound” says Hoop — and this visceral album will open a whole new world of listeners to Jesca’s music. Returning to Tony Berg’s Zeitgeist Studio in Los Angeles, where she recorded Hunting My Dress, Jesca enlisted old friends Shawn Everett, Blake Mills and Tony Berg himself as her co~producers. Says Hoop, “What a combination of minds, these three men & me. It was a real balancing act with tensions pulling toward one or the other. Striking that balance was the ticket to some of the most elevated moments in my musical collaborations to date.”
AllMusic Review by Thom Jurek;  Score: ****
♠  Over four previous albums, singer and songwriter Jesca Hoop has been well~received for standing on the edges of indie folk, a raw-visioned outsider whose work has been in compared in some quarters to Devendra Banhart’s and Joanna Newsome’s (inaccurately in both cases). She has a compelling biography, but her ken for writing beautiful, strange songs is unassailable. Previously, they have been presented with rather minimal production. For fans, The House That Jack Built, her debut for Bella Union, will prove a startling change. Co~produced by Shawn Everett, Blake Mills, and Tony Berg, and performed mainly by Hoop and Mills, this set fully embraces polished — even pristine — electronically enhanced indie pop. This is good news: Hoop has stretched herself very far to the other side indeed. Some might argue too far, but with a collection of songs as strong as this, it amounts to a quibble. Album~opener “Born To” is driven by big~beat loops and skittering rhythms, layered vocals, and swooping synth; Hoop delivers what is essentially a paean to the liberation of her spirit. The hook is irresistible; the bridge influenced heavily by Le Mystère des Voix Bulgares. “Pack Animal” is more accessible, simpler. Hoop’s cadences and phrasing are as cagey as ever, but the refrain is irresistible in its catchy directness. “Peacemaker” commences with clashing synths, distorted basslines, and rhythmic loops before she begins singing. The intimate, vulnerable, yet militant lyrics stand in sharp contrast to the production; it’s the sexiest song she’s ever written. “Ode to Banksy” melds everything from bubblegum, indie pop, and ‘60s girl group tropes to funky futurism in homage to the artist. The most poignant cuts here deal with the death of her father and her relationship with him. The title cut features a sparse, shimmering jazzy guitar at its core (reminiscent of Vini Reilly’s), and Hoop’s heartbreaking falsetto. The other, entitled “D.N.R.” features harp and acoustic guitar, with minimal keyboard embellishments; together they underscore the poignancy of the lyric. “Deeper Devastation” is a slow, mournful, atmospheric meld of ambient textures and shades of gray. Closer “When I’m Asleep” brings it full circle with a big~beat finish amid a wash of samples, and a brooding, soulful folk~blues. Think Kate Bush meets Ellen McIlwaine. The House That Jack Built may be aimed at a new audience, or it might simply be the record that Hoop had to make. Either way, it’s welcome for the risks it takes and delivers on.
Website: http://www.jescahoop.com/news
Drunkenwerewolf: http://www.drunkenwerewolf.com/features/five-albums-for-2014/
••••••_________________________________________________••••••