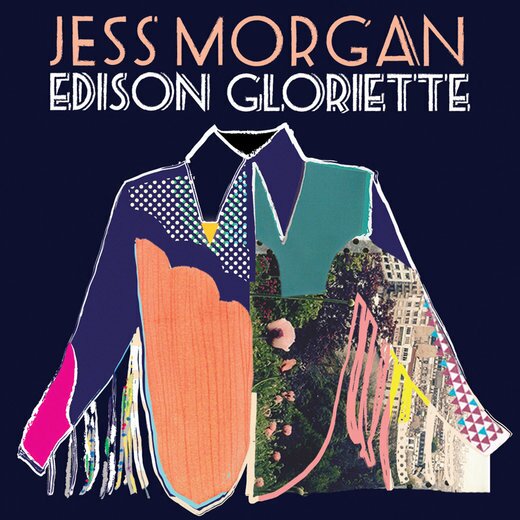 Jess Morgan — Edison Gloriette (21 october 2016)
Location: Norwich, England
Album release: 21 october 2016
Record Label: Drabant Music
Duration:     41:10
Tracks:
01. The Longest Arm      4:23
02. Don’t Meet Your Heroes      4:07
03. Still In Fashion      3:44
04. Hymn In The Morning      4:20
05. Tell Me What The Trouble Is      3:56
06. Come To The Opera With Me, Loretta      2:51
07. Skate While You’re Skinny     2:45
08. Red Rubies      3:42
09. In Your Life      4:11
10. A Hundred Years Old      3:35
11. In Brooklyn      3:36
Personnel/Credits:
Jess Morgan Trio
√   Jess Morgan — Acoustic guitar + vocals
√   Noel Dashwood — Dobro + vocals
√   Jose McGill — Bass + vocals
√   Recorded by Jose McGill in Norwich.
√   Words & music by Jess Morgan
Review
Harry Harris | 19 Apr 2017 | Score: ****
♣   Upon first hearing Jess Morgan back in 2013, this writer was totally won over by the quality of her storytelling and her spikey, claw~hammer guitar style. She’s a songwriter who lives her craft truer than many of her contemporaries — constantly touring, recording, plotting, scheming, even making her own vinyl. Edison Gloriette, her fourth album, has her on excellent form.
♣   As ever, Morgan’s stories take you into other worlds. The comically dark Red Rubies, which brilliantly describes the act of going full Ozzy Osborne on some poor sparrows in the summer, or Come to the Opera With Me, Loretta, a piano ballad about a man trying to save an ailing relationship — and also, you feel, trying to convince himself to be a better person.
♣   It’s the final song of the record that’s the real stand~out, and probably Morgan’s best song to date. In Brooklyn adds its name to the canon of great songs about New York City. It’s a beautifully recognisable love song about how a relationship begins, grows, blooms and changes, with the city an omnipotent backdrop. Starting out with a couple’s sleep interrupted by the shuffling feet of their firstborn coming into the room, the rest of the song unravels as a dream sequence of sorts. ‘Thinking ‘bout back when, we were living in Brooklyn.’ It’s a really simple lyric but carries so much weight in the context — longing and bittersweet, but satisfying too. Three verses, three choruses and a guitar solo; that’s all it is, but you’re drawn so completely into the world of the relationship — it’s magic.
♣   Sonically, there’s a little more going on on this record than on Morgan’s previous, but the songs could still take more. Compare with the incredible production on Anais Mitchell’s Young Man In America, Laura Marling’s Short Movie, or Hiss Golden Messenger’s Heart Like A Levee; three songwriters whose early records are stripped back, but who’ve experimented with different sounds as they’ve developed. Morgan is their equal, make no mistake — we’d love to see her move in a similar direction.
♣   Listen to: In Brooklyn, Come To The Opera With Me Loretta, The Longest Arm
♣   http://www.theskinny.co.uk/
Twitter: https://twitter.com/jessmorgan
Bandcamp: https://jessmorgan.bandcamp.com/album/edison-gloriette
Facebook: https://www.facebook.com/jessmorganmusic
Website: http://www.jessmorgan.co.uk/
Press/Bio:
♣   “Something truly special.” — Folk Radio UK   //
♣   “Absolutely addictive” — The National Student
♣   “Unique vocals, keen observational skills, and top~notch songwriting. A true talent. ****” — Maverick
♣   “Some of the most sublime tunes you are likely to hear in a long time. ****” — R2
♣   Following the soft release of her 4th album Edison Gloriette, Jess Morgan announces UK tour dates for 2017. The tour includes a very special headline show at The Winemakers Club in London (May 6th) as well appearances at a number of summer festivals across the UK.
♣   Jess Morgan is a songwriter’s songwriter. A cerebral storyteller.  Her new album is a tumbler of unfancied folk~roots music, with heart, passion and gusto. As well as crafting songs, Jess also hand crafts her own DIY vinyl records. In a recent article The 405 called her “a true DIY artist in her element. Seriously, she does it all.”
♣   When it came for the Norwich~based singer~songwriter to start recording tracks on ‘Edison Gloriette’ Norway was calling. Jess returned to Bergen team~up with collaborators from her 2010 debut, producer HP Gundersen and producer and studio engineer Daniel Birkeland. She wanted to record slowly and meaningfully following a mad 5 years of touring and rapid releases. 2 weeks in a quiet cabin, alongside a fjord on the outskirts of Bergen was just the right change of pace to record Jess’ acutely observed tales of life, love, people and places.
♣   The past 5 years have seen Jess cement her place in the burgeoning folk, roots and Americana scene throughout the UK and Europe. Her music has attracted the ears of BBC Radio 2, BBC 6 Music, Uncut, The Telegraph, The Guardian, R2 and Folk Radio UK, to name a few. New album ‘Edison Gloriette’ follows on from 2015 Jess release ‘The Bournemouth EP’ which sold~out its limited edition run in less than 24 hours.
_____________________________________________________________