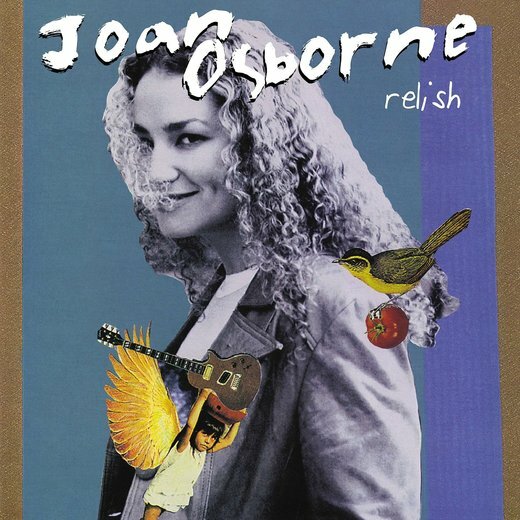 •   Truth is Joan Osborne’s grittier (and simultaneously more fun) ‘Relish’ sounds like the work of someone who stumbled into a music career. Joan had initially dreamed of becoming a documentary film maker, but after a fateful night in a cafe singing an Ella Fitzgerald inspired take on an old number while accompanied by the house pianist, she felt a slow draw to a different creative world. Her first thoughts on the direction of her life make sense — on ‘Relish’ the lyrics seem far less didactic and self–centred when compared with some of her contemporaries’. The modus operandi is one of a storyteller and observer.
•   Holds up over time. When Alanis Morissette was cleaning up at the Grammy’s with her album Jagged Little Pill, the other top female artist at the time was Joan Osborne with her single “One of Us”. While “One of Us” started getting pegged as fluff, I always thought that Osborne’s album should have been getting some of those awards Alanis was taking home. While I thought Relish was the better album, I really wasn’t playing it very often and it quickly got lost in the shuffle. Every so often I pulled the cd out and was surprised by how good it is.
•   It is now back in rotation on my cd player. If memory serves me, the only singles off this album were “One of Us” and “Right Hand Man” (I remember seeing those two performed on Saturday Night Live). However, favorites of mine also include “Lumina”, “Crazy Baby”, “St. Teresa”, and “Ladder”. Actually, to be honest, this is a very solid album and while I haven’t heard much from Osborne’s other albums, this one stands up over time. — Joe Sherry

Background:
•   Relish is a mixture of raw styles of contemporary folk, rock, and sometimes pop–rock sounds.
•   Its biggest hit single, “One of Us”, was used as the theme to the 2003–2005 television series Joan of Arcadia, although the show used a re–recorded version rather than the original version. The album and the song were both nominated for multiple Grammy Awards in 1996. The song was written by Eric Bazilian of the Hooters.
•   “Man in the Long Black Coat” is a cover of the Bob Dylan song from his 1989 album Oh Mercy.
•   The final track, “Lumina”, was used on the first episode of the HBO's hit show The Sopranos. It was also used in an episode in the 4th series of the CBS hit show “The Good Wife” in 2013.

Review
By Gary Dretzka; June 29, 1995 | Score: ****
•   It’s possible to recommend this terrific album simply on the basis of a single tune, heard on the radio once and immediately etched on the mind. The slacker hymn “One of Us” — written by Eric Bazilian, formerly of the Hooters, and sung with tenderness by Osborne — is a moving, hook–filled tune that addresses both the loneliness and wonder of a generation left behind: “What if God was one of us,” goes the chorus, “Just a slug like one of us/Just a stranger on the bus/trying to find his way home . . . back up to heaven, all alone . . . like a holy rolling stone.” Osborne, in her major–label debut, does more with a “yeah, yeah, yeah,” than almost anyone since the Beatles. Fortunately, the album contains a number of other memorable numbers, including the soaringly imagistic “St. Teresa,” and the sexy “Right Hand Man” and “Let’s Just Get Naked.” The whimsical, R&B–colored “Spider Web” opens, “I dreamed about Ray Charles last night and he could see just fine. . . . No `Georgia on My Mind’ no more/I stay in bed with MTV.” At a time when young, soulful singer–songwriters seem to be arriving by the busload, here’s a unique and explosive new talent that demands to be heard. •   http://articles.chicagotribune.com/
Also:
BY JOSEPH HUDAK | October 8, 2015
•   http://www.rollingstone.com/music/news/joan-osborne-on-20th-anniversary-of-relish-polarizing-one-of-us-20151008
Review by fogza | August 12th, 2013 | Score: 4
•   Review Summary: This is a surprising collection of strong material that is perhaps misrepresented by the unlikely hit single ‘One of us’.
•   http://www.sputnikmusic.com/review/58407/Joan-Osborne-Relish/