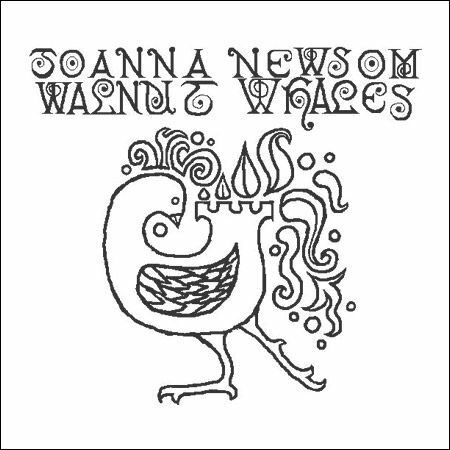 Joanna Newsom — Walnut Whales [EP] (2002)
♠   První životní album vůbec a první ze dvou EP, které vydala Joanna Newsom (ještě “Yarn and Glue” o rok později). Toto album vyšlo za přispění světoznámého producenta (Noah Georgeson*). Walnut Whales je vzácná nahrávka z doby ještě před podpisem s gramofonovou společností. Většina písní se pak objevila v pozměněné podobě na albu Milk–Eyed Mender. Každý fanoušek bude jistě zvědav, jak znějí starší nahrávky oblíbených písní. Součástí reportu o albu jsou texty.  Walnut Whales is the self–distributed debut EP by Joanna Newsom. It was released on CD–R in 2002. ♠   Though the majority of the tracks were re–recorded, with very slightly altered lyrics, for her debut full length album The Milk–Eyed Mender, three of the songs — “Erin”, “Flying a Kite”, and “The Fray” — are otherwise unreleased. Being a limited edition release, it is now unavailable outside of file–sharing networks and second–hand exchanges. I know this is a pretty extreme contrast to the stuff my homeboy has been putting up lately, but Joanna Newsom is certainly an artist who deserves all the recognition the world will allow her. Certainly not the most impressive release from Newsom’s fairly prolific history, Walnut Whales is a rare record self–recorded by Joanna pre–record label signature. Most of the album consists of earlier and shittier recordings of songs made popular by the Milk–Eyed Mender album, but any Newsom fan would certainly will be curious to hear what the older versions of their favorites sound like (many songs performed exclusively with an electric piano).

Born: Joanna Caroline Newsom, January 18, 1982, Nevada City, California, United States
Location: Nevada City of the California
Album release: 2002
Record Label: self–released
Duration:     35:56
Tracks:
1. Erin     3:37
2. Cassiopeia     3:59
3. Peach, Plum, Pear     3:27
4. Clam Crab Cockle Cowrie     3:52
5. Flying A Kite     6:34
6. The Fray     3:22
7. En Gallop! (Spelled without an “!” on The Milk–Eyed Mender)      6:26
8. The Book Of Right–On     4:39
Producer: Noah Georgeson, Joanna Newsom
♠   It is not good that we do have a great deal of information about our fields and our work but we show very less attention towards our culture and heritage. Our culture and heritage are a kind of assets for us that would be making us remember, even when we would have passed away from this world. Some of the famous cultural and historically places of Egypt represent an actual example and accurate picture of those people who used to live in that scenario for hundreds of years. And today, we do not have any persistent and living organism of those people that tell us about their realities, beliefs and cultures but we do have their assets, their buildings and much more similar kind of things that represents them in a good manner.
♠   On the other hand, today, we are neither aware of the famous and valuable personalities of our society nor we know much about the culture and heritage that has been given to us, by birth. That is why here in this reading, few aspects of the life of one of the valuable personalities would be defined that originally belong to the California, one of the states of United States of America. That personality is a lady and in this men dominant society, she has made a large number of achievements that proves she has got some exceptional skills and abilities of proving herself in front of large audience. When her name is highlighted, you will definitely be able to observe some interesting and lovely expressions on your face and many of the readers would also have reckoned her name, as her name is Joanna Newsom.
♠   Joanna Newsom is considered as first lady who was taught the skills of playing Celtic harp with the help of local teacher that was located in her native city. At that time, she was living in Nevada City of the California that has prominent importance all over the California. After developing the skills of playing the Celtic harp, she started showing her interest towards another step and then she decided to develop the skills of pedal harp. It was not enough for her to develop only these few skills as she was willing and pursing after the self–satisfaction. In case of achieving self–satisfaction, it is not enough to be satisfied even after having proper command over Celtic harp and pedal harp and same was the case with Joanna Newsom. Later on, she decided to start composing by coming in use all those skills that she had been taught so far and also by utilizing all the experience that she had been earned throughout her learning cycle.
♠   Meanwhile, she did not stop the process of learning and enhancing their skills and she got the affiliations from certain well reputed institutions, for instance, in Oakland region of California, she got the tutorial assistance from Mills College. Here in Mills College Oakland, she tried to enhance their compositions skills as well as skills of creative writing because Joanna Newsom knew that having professional creative writing and compositions skills are only kind of thing that can beatify her work.