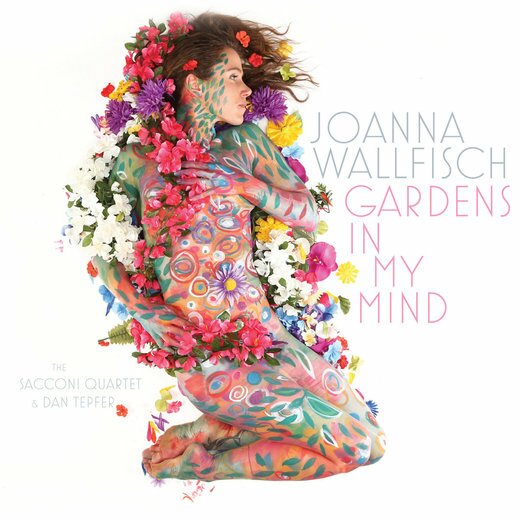 →   “The most adventurous project yet” is how London~born, New York~based vocalist JOANNA WALLFISCH describes her third album “Gardens In My Mind” (Sunnyside), with pianist Dan Tepfer and the Sacconi String Quartet, which stemmed from a Salisbury Festival commission, and was recorded last year in Wyastone, Monmouthshire. Sebastian found out more:
​→   “A truly beautiful listen from start to finish” — PopMatters
​​→   “An exquisite singer~songwriter album. . . refined and elegant” — DownBeat ****
​​→   “Bold, dramatic and powerful” — JazzTimes
Location: London ~ Brooklyn, New York
Album release: July 22nd, 2016
Record Label: Sunnyside Communications SSC 1405
Duration:     48:51
Tracks:
01. Moons of Jupiter     4:35
02. All I Want     4:28
03. Gardens In My Mind     4:27
04. Satellite     7:16
05. Distant Shore     3:43
06. Anonymous Journeys     4:01
07. Patience     5:07
08. Satin Grey     3:42
09. This Is How You Make Me Feel     4:10
10. Song To The Siren     4:26
11. Rational Thought     3:47
12. Dreams Of A Carousel     1:02
13. Brighton Beach     3:32
14. Lonely Road (All I Want Reprise)     1:26
Personnel:
•  Joanna Wallfisch — vocals, piano & ukulele
•  Dan Tepfer — piano & melodica
The Sacconi Quartet:
•  Ben Hancox — violin
•  Hannah Dawson — violin
•  Robin Ashwell — viola
•  Pierre Doumenge — cello
Description:
→   In early 2015 Joanna Wallfisch released The Origin of Adjustable Things, an enthusiastically received duo project with pianist Dan Tepfer, featuring Wallfisch’s searching originals plus imaginative covers of Tim Buckley, Radiohead and more. Wallfisch follows up this summer with the adventurous Gardens In My Mind, a stunning new collaboration with Tepfer and The Sacconi Quartet, a London~based ensemble featuring violist Robin Ashwell, cellist Pierre Doumenge, and violinists Ben Hancox and Hannah Dawson. The album also features Tepfer on piano and melodica, with Wallfisch herself on vocals, piano and ukulele.
→   Wallfisch and Tepfer each contributed string arrangements for the project, with Tepfer taking on four of the songs. The result is an intricate collection of originals and reinterpretations, plus two choice covers by Joni Mitchell and Tim Buckley. In their inimitable way, Wallfisch and her cohorts blur boundaries between the classical, jazz and singer~songwriter worlds. A stunning, whimsical bonus video of the title track “Gardens In My Mind,” directed and edited by Wallfisch herself, involves full body paint and flowers and is included in the album package.
→   The idea to record with strings came about after a recent engagement at the Salisbury Festival in the UK, where Wallfisch was invited to collaborate with The Sacconi Quartet, the festival’s resident ensemble. Hailing from a family of noted string players, Wallfisch saw this opportunity as the fulfillment of a longtime goal and she pursued it to its logical conclusion: a full album with string quartet. The result, Gardens In My Mind, expands her already broad musical horizons, showcasing her richly expressive voice and head~turning lyrics in unexpected ways. Seven songs that originally appeared on Origin return on Gardens In My Mind in new musical clothing: on “This Is How You Make Me Feel,” “Anonymous Journeys,” “Satellite,” “Rational Thought,” “Satin Grey”, “Brighton Beach” and Tim Buckley’s “Song to a Siren,” the strings add sonic dimension, dynamic shading and the spark of interplay as they blend with and bounce off Wallfisch’s poetic musings.
→   Wallfisch’s affecting, darkly hued cover of Joni Mitchell’s “All I Want” appears twice: first early on and then again as the abstract reprise “Lonely Road,” featuring Wallfisch’s distinctive looping techniques and sonic inventiveness. Chosen for its message of the ever~searching soul, the song provides just the right album ending, evoking a journey that has just begun.
→   The program begins with Wallfisch’s wistful “Moons of Jupiter,” a love story playing out from its hopeful start to a seemingly inevitable end under the watch of a silent and indifferent cosmos. A bold opener, this song climaxes in a dizzying 5/8 instrumental coda, reflecting the idea of the universe itself exploding under the very weight of broken love.
→   “Gardens In My Mind” highlights Tepfer’s virtuosity with a bombastic boogie~woogie introduction, while Wallfisch’s quirky storytelling and spunky vocals lead the listener through her imagination, where she finds herself dreaming of a secret garden in which she can escape the confines of her city dwelling. She sings “Distant Shore” with a sweetness of tone, relating a story of grieving for someone who had an optimism for life. The almost entirely instrumental “Patience” finds the strings weaving and soaring through countermelodies and emotive harmonies, culminating in a sparse and reflexive lyric sung so gently as to be almost spoken.
→   Long an admirer of the orchestral sounds on recordings of artists such as Nick Drake, Joni Mitchell and Laura Mvula, Wallfisch had been keen to work with such sounds herself. With Gardens In My Mind she has done it, exploring new aesthetics while highlighting her playfulness and trust in her fruitful imagination.
Label: http://sunnysidezone.com/
Facebook: https://www.facebook.com/JoannaWallfisch
Website: http://www.joannawallfisch.org/
Twitter: https://twitter.com/JoannaWallfisch
Interview:
→   http://www.londonjazznews.com/2016/06/interview-joanna-wallfisch-new-cd.html
→   http://www.londonjazznews.com/2016/11/interviewpreview-joanna-wallfisch-forge.html
•→••→••→••→••→••→••→••→••→••→••→••→••→••→••→••→••→•