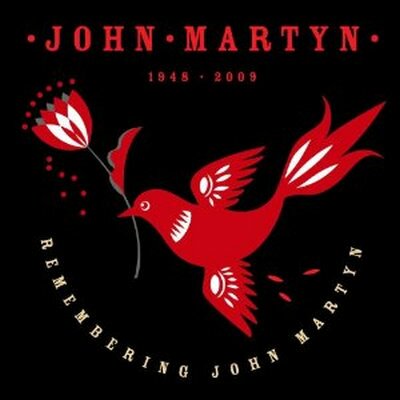 Going to get on up and fly away
Go on out for another way
And a new day's dawn
Going to carry on.

Posted by Scott Wilson on Thu, Jan 29, 2009 at 12:16 PM (http://www.pitch.com/wayward)
∏ Damn. John Martyn has died.
∏ The rough-and-tumble Scottish folk-rock songwriter and musician, whose influence reached much further than his name, was 60. No cause of death has been announced yet, but Martyn had suffered a number of health calamities in his last decade.
∏ After a couple of records spent as an earnest folk troubadour in the late 1960s, Martyn unleashed a distinctive new singing style, part jazz-inflected slur and part whiskey-throated growl. Almost overnight, he also evolved a guitar technique that pioneered tapping and presaged the delay-pedal fireworks of U2's The Edge; as early as 1970, he had begun duct-taping an Echoplex device to his acoustic guitar, allowing him to bend and sustain notes to generate a reverb-drenched, quasi-electric sound. (It helped that he was already a strong technician with elegant rhythmic sense.)
∏ With 1973's Solid Air (its title song written for friend and labelmate Nick Drake a year before Drake's death), everything came together, and the handful of albums that emerged in its wake -- through 1980's ravaged divorce album, Grace and Danger -- stand up fine alongside that decade's best albums (and pretty much invented the chill-out genre, which isn't as unflattering as it may sound today, even if it undersells Martyn's considerable understanding of the blues and his convincing fury).
∏ Here's "Solid Air." MP3: John Martyn, "Solid Air"
∏ Martyn wasn't my A-number-one all-time favorite -- his early records are spotty, and his post-1982 discography is cluttered with dated synth workouts, bellicose live albums and redundant compilations (many of which he was powerless to object to, never having been much of a dealmaker). But he's certainly among my top 10, and his best music has for a long time been the focal point of my personal crusade. I've probably given copies of my much-tinkered-with "Favorite Martyn" CD to a dozen people over the past few years and played him for just about anyone who has come within a few yards of a set of speakers. I admit that response to my Martyn evangelism has never been quite what I've had in mind, but that hasn't dampened my enthusiasm. Today, I'm gonna try again after offering these words from the elegiac "Small Hours," off my favorite Martyn record, 1977's One World:
Going to get on up and fly away
Go on out for another way
And a new day's dawn
Going to carry on.
∏ And here's an MP3 of "Small Hours":
∏ MP3: John Martyn, "Small Hours"  MP3: John Martyn, "Small Hours"

Biography  by Brett Hartenbach
♣  Singer/songwriter/guitarist John Martyn was born Iain David McGeachy on September 11, 1948, in New Malden, Surrey, and raised in Glasgow by his grandmother. He began his innovative and expansive career at the age of 17 with a style influenced by American blues artists such as Robert Johnson and Skip James, the traditional music of his homeland, and the eclectic folk of Davey Graham (Graham remained an influence and idol of Martyn's throughout his career). With the aid of his mentor, traditional singer Hamish Imlach, Martyn began to make a name for himself and eventually moved to London, where he became a fixture at Cousins, the center for the local folk scene that spawned the likes of Bert Jansch, Ralph McTell, and Al Stewart. Soon after, he caught the attention of Island Records founder Chris Blackwell, who made him the first white solo act to join the roster of his reggae-based label. The subsequent album, London Conversation (February 1968), only hinted at what was to come in Martyn's career. Although it contained touches of blues along with Martyn's rhythmic playing and distinctive voice, it was for the most part a fairly straightforward British folk record. With his follow-up later that same year, the Al Stewart-produced The Tumbler, Martyn began to slowly test other waters, employing backup musicians such as jazz reedman Harold McNair, to flesh out his sound. His voice also started to take on a jazzier quality as he began to experiment musically.
♣  While on the road, Martyn continued to experiment with his sound, adding various effects to his electrified acoustic. One such effect, the Echoplex, allowed him to play off of the tape loops of his own guitar, enveloping himself in his own playing while continuing to play leads over the swelling sound. This would become an integral part of his recordings and stage performances in the coming years. He also met Beverley Kutner, a singer from Coventry who later became his wife and musical partner. The duo released two records in 1970, Stormbringer and The Road to Ruin, the former recorded in Woodstock, N.Y. with American musicians including members of the Band. For one track on their second album, John and Bev hired Pentangle double bassist Danny Thompson, who remained a constant in John's career throughout the better part of the '70s, on-stage and in the studio. John planned his third solo album when Beverley retired to take care of the couple's children, although there was supposedly pressure from Island for him to record on his own.

© Mike Owen
♣  The next couple of years saw Martyn continuing to expand on his unique blend of folk music, drawing on folk, blues, rock, and jazz as well as music from the Middle East, South America, and Jamaica. His voice continued to transform with each album while his playing became more aggressive, yet without losing its gentler side. Bless the Weather (1971) and Solid Air (1973) which helped form the foundation of Martyn's fan base, featured some of his most mature and enduring songs: "Solid Air," written for close friend Nick Drake, "May You Never" (recorded by Eric Clapton), and "Head and Heart" (recorded by America). By the time of 1973's Inside Out, Martyn's use of the Echoplex had taken on a life of its own while his vocals became more of an instrument: deeper and bluesier, with words slithering into one another, barely decipherable.
♣  During this period, Martyn's well-publicized bouts with alcoholism came to the forefront and began to affect his career somewhat. He became an erratic and at times self-destructive performer. He might perform an evening of electronic guitar experiments for a crowd of folkies or a set of traditional, acoustic ballads when playing to a rock audience. His shows would also range from the odd night of falling over drunk to sheer brilliance, as captured on the independently released Live at Leeds (1975).
♣  Following Sunday's Child (1974), the live record, and a 1977 best-of collection, Martyn, for the most part, abandoned his acoustic guitar on record for a sort of rock, world, and jazz fusion. Although his style was moving away from its folk roots, his songs retained the passion and structure of his best early work. Grace and Danger (1980), his first release since 1977's One World, painfully and honestly depicted the crumbling of John and Beverley's marriage in some of his most powerful material in years. It also seemed to garner interest in Martyn's sagging career. With this new momentum and the help of friend Phil Collins, Martyn signed to WEA, where he recorded two records, Glorious Fool (1981) and Well Kept Secret (1982). Glorious Fool, a superb effort, produced by Collins and featuring Eric Clapton on guitar and Collins on drums, piano, and vocals, looked to be his best shot at mainstream success, but failed to extend his cult status. Martyn released his second independent live record, the magnificent Philentropy, before returning to Island Records for two studio releases, a live album and a 12" single which featured a version of Bob Dylan's "Tight Connection to My Heart." He was dropped by the label in 1988.
♣  Continuing to battle his alcoholism, Martyn resumed his career in 1990 with The Apprentice and 1992's Cooltide. He also released an album of his classic songs re-recorded with an all-star cast featuring Phil Collins, David Gilmour of Pink Floyd, and Levon Helm of the Band, as well as various compilations and live recordings. After a four-year layoff, Martyn issued And, an album with strong jazz, trip-hop, and funk overtones, followed in 1998 by The Church with One Bell, a collection of diverse covers. In 1999 he also released a live double album which documented a classic concert at London's Shaw Theatre in 1990 entitled Dirty, Down & Live.
Martyn recorded a surprise studio comeback effort called Glasgow Walker at the turn of the century that was very well received, and had his entire Island catalog remastered and reissued -- two of his albums, One World, and Grace and Danger, were given the Universal "deluxe" treatment with bonus discs. In 2003, a cyst burst in Martyn's leg due to septicemia brought on by diabetes. The end result was an amputation, but he continued to tour the world with the same tireless energy and restlessness, performing with his band from a wheelchair. Martyn, shrugged it all off, typified by this infamous quote: " "I've been mugged in New York and luckily I fought my way out of it. I've been shot a couple of times as well but I just lay down and pretended to be dead." 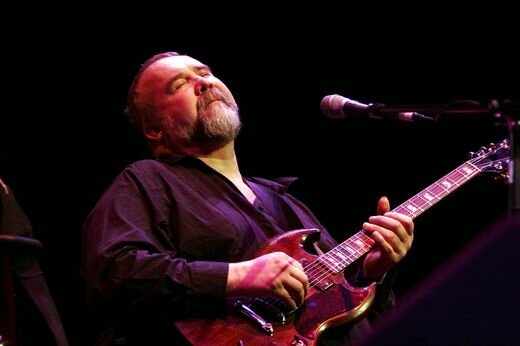 © John Martyn / pic Tim Dickeson /  jazzpictures.co.uk
• John Martyn St Davids Hall, Cardiff 20 November 2004
• ...John Martyn (Guitar, Vocals)
• Spencer Cozens (Keyboards)
• Arun Amun (Drums)
• Alan Thompson (Bass)
• Colin Tully (Sax)
♣  In 2007 two DVDs appeared, a Live at the BBC set recorded in the 1970s, and Voiceprint's The Man Upstairs documentary. 2008 saw Martyn's name surface once more with some real regularity due to a flurry of activity by the man and his touring schedule, but also because of new releases. His One World label issued a pair of catalogued live dates, the best of these being Simmer Dim , and, in December, Universal/Island released a four-disc retrospective box entitled Ain't No Saint. In January, 2009 Martyn was awarded the OBE (Order of the British Empire) -- an irony since he was the most rebellious of Scotsmen. Martyn's health, however, was in real decline as a result of a lifetime of substance abuse issues; in the early morning hours of January 29, 2009, he passed away at the age of 60 after a third bout with pneumonia.
♣  With his characteristic backslap acoustic guitar playing, his effects-driven experimental journeys, or his catalog of excellent songs, as well as his jazz-inflected singing style, John Martyn will remain an important and influential figure in both British folk and rock.

© John Martyn / Philentropy
Release date: 1983
Duration:     41:20
Review by Brett Hartenbach
• John Martyn's second live release, Philentropy, is an interesting look back at his career from his transitional period in the early 1970s through 1982's Well Kept Secret. Built largely around electric guitar and synthesizers without even a trace of acoustic instruments, he continues to move even further away from the folk sound of his early days. Along with a tight three-, sometimes four-piece band, Martyn takes this opportunity to use years of experience perfecting his sound to attempt to update these selections from his back catalog. Songs such as "Sunday's Child," "Smiling Stranger" and "Root Love" seem to reach fruition in this setting and soar above their previous incarnations, while "I Don't Wanna Know" and "Make No Mistake" retain the passion of the original recordings. Philentropy, which may put off fans of his earlier work, isn't just a typical rehashing of past work in a live setting, but more a completion of a journey.
Credits:
• Jeff Allen  Drums
• Winston "Shadow" Bailey  Composer
• Hylton Beckford  Composer
• Derric Crooks  Composer
• Sydney Crooks  Composer
• Danny Cummings  Percussion
• Ronnie Leahy  Keyboards
• John Martyn  Composer, Guitar, Harmonica, Keyboards, Primary Artist, Vocals
• Alan Thompson  Guitar (Bass)