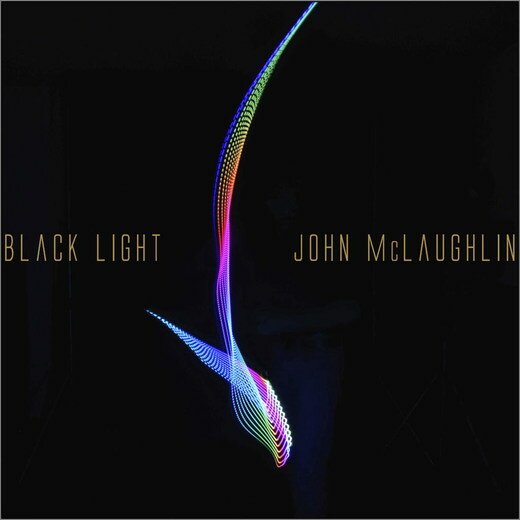 DESCRIPTION:
•−•  Expansive, emotionally charged album 'Black Light' showcases guitar legend John McLaughlin’s virtuoso 4th Dimension band.
•−•  As a musician, composer, and bandleader, John McLaughlin’s vast contributions to contemporary improvisational music are only just beginning to be fully understood, appreciated, and absorbed by artists and enthusiasts alike. From Mahavishnu Orchestra, Shakti and his collaboration with Paco De Lucia, to his current band the 4th Dimension, McLaughlin’s music has extended across the boundaries dividing jazz, rock, and innumerable global traditions, encompassing a number of genres while emerging fully formed as his own, uniquely personal expressive medium.
•−•  'Black Light' includes eight original McLaughlin compositions, including a heartfelt homage to his departed colleague, collaborator, and friend Paco De Lucia — with whom McLaughlin had intended to compose an album's worth of new material just before De Lucia’s untimely passing. McLaughlin has returned to acoustic guitar for a tribute to his friend, entitled "El Hombre Que Sabia" and brings forth from the instrument a depth of sadness and admiration beyond words.
•−•  Mclaughlin adds, “I have explored ways in music and recorded them with happiness. 'Black Light' has opened a portal that is neither Jazz nor Rock, nor Indian nor Blues, and yet all of these: it's an open door.”
•−•  Otherwise electric, Black Light features the 4th Dimension — “my three favourite musicians,” in McLaughlin's words — in full flight, with their empathy and precision honed on stage and in the studio. The 4th Dimension is composed of the remarkable multi−instrumentalist Gary Husband on keyboards and drums, Etienne Mbappe’s nimble, effervescent electric bass, and the powerhouse drumming of Ranjit Barot.

NEWSLETTER FROM JOHN McLAUGHLIN:
Black Light
•−•  “All my recordings are personal and reflect what is happening in my interior world, and I’m happy about the way the diverse cultural influences that have impacted on me for so many years, are showing themselves in this new album. The inclusion of ‘movements’ inside the pieces is a new development for me and I like the way they work within, giving a breath, or pause with a different dynamic. The work here relates to, and is a development of the work I began with the album ‘Industrial Zen’ .
•−•  In addition there are a number of homages:, namely in « Here come the Jiis » to the memory of the wonderful musician with whom I played for 14 years, Mandolin Shrinivas. The piece « Panditji » is a small thank you to a great human being and musician, Pandit Ravi Shankar, with whom I had the honor of studying under during the middle 1970’s.
•−•  « El Hombre que Sabià » is for the unforgettable Paco de Lucia, and is one of the pieces we had planned to record together last year. He was particularly fond of this piece, so I changed the title and worked out an arrangement with the great musicians of 4D; I’m really happy how it turned out.
•−•  « Being you being me » comes out of an experience of seeing the One in the many. I am personally convinced that the only real evolution in humanity will be when we all see the divine in each other, and so accord the respect that every individual merits. In the opening and closing of this piece, you’ll hear the synth guitar.
•−•  « 360 Flip » comes from skateboard move my son introduced me to, and reminded me of a 360 Flip that can happen in your mind, when your mind turns 360 degrees and you see everything the same but differently. This can happen while playing music, meditating or even walking in the mountains.
•−•  « Clap your hand » is a pun on the Zen koan, « What is the sound of one hand clapping? »
•−•  « Gaza City » requires no explanation after the bombardment of that City in the summer of 2014. I played the synth guitar and electric guitar on this piece.
•−•  And finally « Kiki » who is such a dear friend and wonderful drummer.
•−•  I hope you find something in the music.” •−•  John McLaughlin

FROM LABEL:
•−•  “Playing and working with the same musicians in a band is a living process which unfolds as time goes by,” reflects guitarist, composer, and bandleader John McLaughlin when considering the release of his latest album, Black Light — the third studio album to feature his band, the 4th Dimension. Available via Abstract Logix on September 18, 2015, Black Light finds the relentlessly inquisitive, exploratory McLaughlin continuing to uncover new melodic and rhythmic pathways with the same fearless zeal that has made him one of modern music’s most admired and influential figures. And, in the 4th Dimension — drummer/vocalist Ranjit Barot, keyboardist/drummer Gary Husband, and bassist Étienne M’Bappé — McLaughlin has gathered a trio of fellow travelers with the collective discipline, technical ability, musicianship, and imagination to support, enhance, and enrich McLaughlin’s challengingly expansive new material and methods.
•−•  “I am always excited to play with these musicians,” McLaughlin says enthusiastically — no small compliment given he has performed alongside an array of revolutionary talents in his lifetime. “Not only are they marvelous players, but they are great human beings, and as such we have developed, over the years, a deep complicity that comes through in the music.”
•−•  Alternately thrilling and heart−rending, the performances and compositions captured on Black Light represent a daring cross−section of McLaughlin’s remarkable career. Throughout, elements of different traditions and styles McLaughlin has been inspired by (and, in some cases, helped to create) are juxtaposed and interwoven into startling new designs — in a most tasteful, musical fashion. “If you simply impose musical elements of a different culture arbitrarily, the result will not be emotionally authentic,” he explains. “The integration of the various talents of the musicians arrives in a way that I can only call organic.”
•−•  Helping to cohere the sonic landscape of Black Light is the artful use of electronic elements — both in terms of programmed rhythm tracks, guitar synthesis, and Husband’s uniquely human touch on synthesizers. “The original concept of this recording relates to an album I made some years ago called Industrial Zen,” McLaughlin continues, “in which I worked a long time with what is called ‘sound designs,’ which are either soundscapes or rhythmic elements that have the capacity to evoke feelings and visions in my imagination that would not come otherwise. I became involved in synthesis as far back as 1975, and I’m still attracted to the possibilities of expression. It actually is a fascinating world, but can be quite easily abused in an artistic sense. To me, this is the seductive side of sound design.”
•−•  The results achieved by integration of the band’s powerful yet nuanced performances with textured electronic backdrops both haunting and urgent is startling. Witness Barot going head−to−head with a propulsive, roiling synthetic rhythm track on “Kiki,” or how the band weaves in and out of “360 Flip”’s stark, unpredictable electro−underpinnings. “360 Flip” is also one of several Black Light tracks to feature Barot’s mastery of konokol — an Indian tradition of vocalized percussion.

Equipment:
•−•  Gibson EDS−1275 — McLaughlin played the Gibson doubleneck between 1971 and 1973, his first years with the Mahavishnu Orchestra; this is the guitar which, amplified through a 100−watt Marshall amplifier "in meltdown mode," produced the signature McLaughlin sound hailed by Guitar Player as one of the "50 Greatest Tones of All Time."
•−•  Double Rainbow doubleneck guitar made by Rex Bogue, which McLaughlin played from 1973 to 1975.
•−•  The first Abraham Wechter−built acoustic "Shakti guitar," a customised Gibson J−200 with drone strings transversely across the soundhole.
•−•  He has also played Godin electric/MIDI guitars, one of which can be seen on the Eric Clapton's Crossroads Chicago 2007 DVD.
•−•  John currently is endorsed by PRS guitars.
Website: http://www.johnmclaughlin.com/project/black-light/
Twitter: https://twitter.com/jmcl_gtr
Label: http://www.abstractlogix.com/xcart/product.php?productid=26279