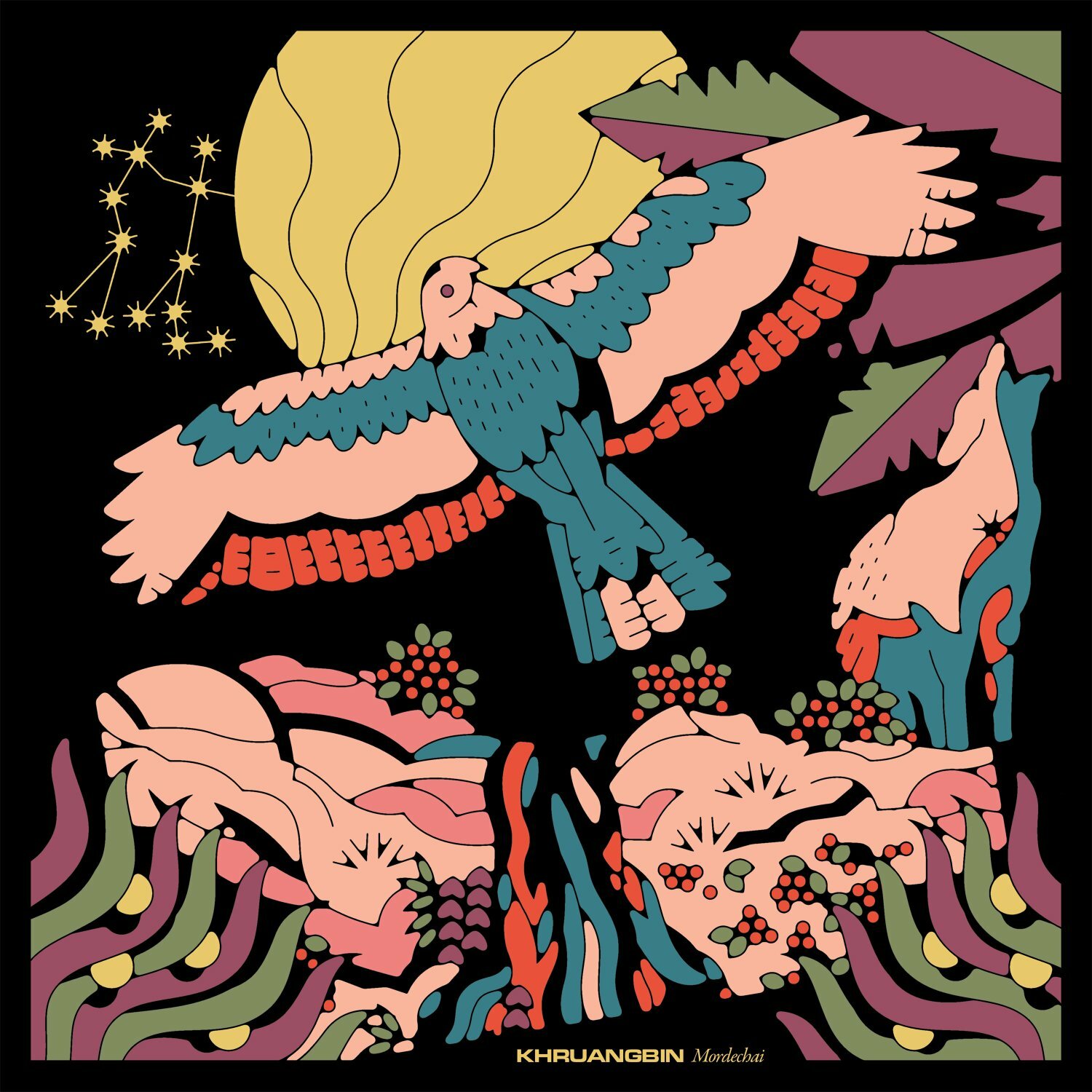 ♦ℜ♥   Khruangbin byl vždy vícejazyčný a tkal dalekosáhlé hudební jazyky v akcentech východoasijského surf~rocku, perského funku a jamajského dabu až do do sladce znějící/sladké jako med — harmonie. Jakoby někdo v odposlechu zachytil tento rozhovor: „Chci na hospodářské delikty“. „A já vejce se slaninou.“
♦ℜ♥   Jako první pro většinou instrumentální kapelu, Mordechai uvádí vokály prominentně v téměř každé písni. Je to posun, který odměňuje riziko, přeorientuje přenosný sound Khruangbin k novému smyslu emoční přímosti, aniž by ztratil ducha kočovného putování, který je vždy definován. A to všechno začalo tím, že se vrátili domů. Ó, domov můj! Kde jsi? Location: Houston, Texas, United States
Genres: Psychedelia, soul, funk, instrumental rock, dub
Album release: June 26th, 2020
Record Label: Dead Oceans
Duration:     43:58
Tracks:
01. First Class   4:47
02. Time (You and I)   5:42
03. Connaissais de Face   4:21
04. Father Bird, Mother Bird   3:05
05. If There is No Question   5:53
06. Pelota   2:48
07. One to Remember   4:31
08. Dearest Alfred   3:58
09. So We Won’t Forge   4:58
10. Shida     3:55
♦ Limited Edition Translucent Pink vinyl, housed in gatefold sleeve. Review
By Dylan Barnabe ⌊ Jun 23, 2020 ⌋ Score: 8
♦ℜ♥   Epiphanic moments often reveal a sudden relevation or insight, though their presence is hard to predict. Such is the case behind Khruangbin‘s latest album, Mordechai. As the story goes, bassist Laura Lee was invited to take a trek out to a waterfall by a new friend, Mordechai, who helped her to realize the importance behind the age old adage of appreciating the journey rather than rushing to the destination. Upon reaching the waterfall, Laura was encouraged to join in jumping off into the water below. As she leapt, Mordechai yelled her full name, “Laura Lee Ochoa” — something that had a profound, baptism~like effect and deeply resonated within her.
♦ℜ♥   This moment spurred Ochoa to begin writing lyrics — hundreds of pages’ worth, to be exact
The Houston group, which also includes guitarist Mark Speer and drummer DJ Johnson, quickly got to work. While Mordechai follows in the footsteps of its critically acclaimed predecessors The Universe Smiles upon You and Con Todo el Mundo, it is unique in that nearly every song on the album features vocals. The effect is similarly profound, as the added human element provides another channel for the group’s collective consciousness and creativity to flow freely.
♦ℜ♥   The album itself deals primarily with the theme of memory, in particular “holding onto it, letting it go, [and] naming it before it disappears.” Khruangbin draw inspiration from other cultures, epochs and mediums to create vivid soundscapes that delve into the particulars of a moment in time — however fleeting or everlasting. Songs like “Connaissais de Face” capture the sensual dialogue and sensuality reminiscent of French new wave cinema, while “Dearest Alfred” explores the letters Ochoa’s grandfather wrote to his twin brother. “So We Won’t Forget” is also particularly touching, as it finds Ochoa chronicling her memories on Post~Its around her apartment to prevent them from slipping away.
♦ℜ♥   Musically, Khruangbin maintain their unwavering ability to weave a tapestry of diverse styles and sounds into their musical output. On Mordechai, the group incorporates styles native to Pakistan, Korea and West Africa, including some Indian chanting boxes and Congolese syncopated guitar. The album is an ode to all that Khruangbin have achieved and a look forward to everything that is to come.
♦ℜ♥   https://exclaim.ca/

Boomkat Product Review:
♦ℜ♥   Khruangbin has always been multilingual, weaving far~flung musical languages like East Asian surf~rock, Persian funk, and Jamaican dub into mellifluous harmony. But on its third album, it’s finally speaking out loud.
“Mordechai features vocals prominently on nearly every song, a first for the mostly instrumental band. It’s a shift that rewards the risk, reorienting Khruangbin’s transportive sound toward a new sense of emotional directness, without losing the spirit of nomadic wandering that’s always defined it. And it all started with them coming home.
♦ℜ♥   By the summer of 2019, the Houston group — bassist Laura Lee Ochoa, guitarist Mark Speer, drummer DJ Johnson — had been on tour for nearly three~and~ahalf years, playing to audiences across North and South America, Europe, and southeast Asia behind its acclaimed albums The Universe Smiles Upon You and Con Todo El Mundo. They returned to their farmhouse studio in Burton, Texas, ready to begin work on their third album. But they were also determined to slow down, to take their time and luxuriate in building something together.
♦ℜ♥   Musically, the band’s ever~restless ear saw it pulling reference points from Pakistan, Korea, and West Africa, incorporating strains of Indian chanting boxes and Congolese syncopated guitar. But more than anything, the album became a celebration of Houston, the eclectic city that had nurtured them, and a cultural nexus where you can check out country and zydeco, trap rap, or avant~garde opera on any given night.
♦ℜ♥   In those years away from home, Khruangbin’s members often felt like they were swimming underwater, unsure of where they were going, or why they were going there. But Mordechai leads them gently back to the surface, allowing them to take a breath, look around, and find itself again. It is a snapshot taken along a larger journey — a moment all the more beautiful for its impermanence. And it’s a memory to revisit again and again, speaking to us now more clearly than ever.”
♦ℜ♥   https://boomkat.com/products/mordechai
Website: https://www.khruangbin.com/
Label: https://deadoceans.com/