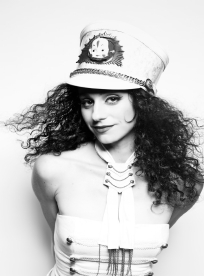 Description:
Ξ This P-Funk songstress is sure to woo you with pure funk and rock and roll pleasure!
Genre: Rock: Funk Rock
Ξ Kim Manning brings us “Good People” in her Sophomore Release.
Singer Kim Manning is no stranger to delivering great vibes and groovy tones to music. Known as the “roller-skating songstress” in George Clinton and the P-Funk Allstars, Manning is set to debut the album “Good People” and is sure to win you over with this CD.
Ξ Manning has had quite the music career catalogue, working with such heavyweights as The Red Hot Chili Peppers, Snoop Dog, and Macy Gray, just to name a few. Her notable personality doesn’t stop there, as she became a much watched reality figure on VH1’s “Flavor of Love” as “Peaches”. Kim is ready to drop the album “Good People”, and is hard at work in the studio finishing her up-coming album “Space Queen” due out this winter.
Ξ Written and recorded through the Steel Bridge Song Festival in Sturgeon Bay Wisconsin, “Good People” was birthed. The Steel Bridge Song Festival is an artist retreat of sorts with an intimate group of songwriters that meet twice a year. Manning says, “90% of this album was written at the festival from playing spin the bottle”. Ξ Another major element to the record was Manning meeting with producers Steve Hamilton and Victor de Lorenzo of the Violent Femmes.
Ξ Kim Manning is sure to deliver soulful, funky, and rock and roll pleasure with “Good People”.
Ξ Manning was born in Ponca City, Oklahoma and moved to Santa Rosa and then Los Angeles. Manning relocated to the Bay Area in 2007. Manning began studying classical voice and violin at 6 years old and went on to study at the University of Tulsa and the Liverpool Institute of Performing Arts.
CD BABY: http://www.cdbaby.com
Interview: Kim Manning - http://music-illuminati.com/interview-kim-manning/

Airto Moreira — I'm Fine, How Are You?

Daniel Lanois — Here Is What Is

Bat For Lashes — The Haunted Man

PS I Love You