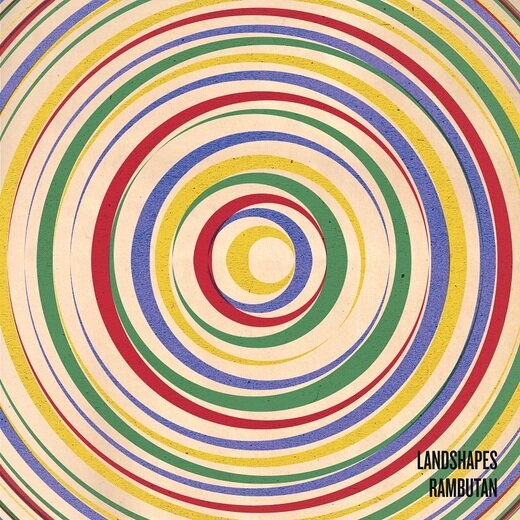 Album Moods: Detached Delicate Indulgent Intimate Bittersweet Cerebral Literate Plaintive Poignant Searching Amiable/Good-Natured Gentle Reflective Sentimental Earnest Gleeful Playful Sweet Whimsical Witty Carefree Intense Volatile
Themes: Summer Introspection Late Night Reflection The Creative Side Sunday Afternoon
Ψ   Ash Workman stepping in on production. Dan Blackett explains that the time each musician has spent together has helped foster a collective approach: "you start to absorb what you like and dislike, individually and collectively. Figuring out which direction you’re heading in via shared experience and foggy disparate influences. I think we’re still fine tuning that direction — and that’s good."
REVIEW
BY CHRIS JONES | 11 JUNE 2013 | Score: 7.5/10
Ψ   In morphing, with a subtle switch of consonants, from Lampshades to Landshapes, these Bella Union signees signalled solemn intent. Debut album Rambutan switches scenes and casts its own shadows.
Ψ   Unquestionably best remembered, in their previous incarnation, for a cup-assisted cover of an old-time bluegrass ditty, the artists formerly known as Lulu and the Lampshades now favour electrified brooding over acoustic cool. The shift of focus emulates their old associates’ Peggy Sue in its maturing tone — but Landshapes still wield the odd ukulele or two.
Ψ   The album begins in something approaching slow motion, with distinctly prog-ish creaks and chords; plaintive vocals inhabiting a lonely sound that is two parts industrial wasteland and one part Pink Floyd. It’s both surprising and a little circumspect — but the band play their ace next up. ‘In Limbo’ boasts a riff that blows apart any notion of constraint, a release for the pent-up potency that sends the song soaring to fill the space. As on the toe-tapping ‘Insomniac’s Club’, soon to be a single, its quirky catchiness and confident insouciance are instantly appreciable. While this album is pondering rather than playful, Landshapes retain an indie pop sensibility in places.
Ψ   ‘LJ Jones’ sets out with a similar purpose, scudding and scurrying through two choruses before becoming the first of a run of tracks that start to tread rings around themselves, circling the kernel of their own construction as if taking direction from the cover art. Vocals stretch to wordlessness, momentum ebbs inwards and, while there’s often an edge to the introversion — fiddle streaks against the strum, bursts of percussive intensity, flightless flapping — the sense of contemplation isn’t overcome by restlessness. The long-gestated ‘Impasse’, grown to fit the Landshapes sound, spins wheels within wheels, never crashing or crescendoing through the cycle.
Ψ   ‘Demons’, the lone survivor from Lulu’s Cold Water EP, bridges the change and changes the game, simple and unswervingly stirring. Given elegant and gently rousing treatment here, it is troubled with beautiful unease from beginning to end. If the introduction conjures creaking branches and disturbed earth, thereafter the song makes and mines a subterranean landscape, a space where “these demons that you gave to me / make the best and worst of me”. ‘Detour’, following, cannot emulate the impact but is still a turbulent noise-maker, breaking out to fill the space beneath its own decorous arcs and eschewing lyrics as the expansiveness swells.
Ψ   Rambutan probably achieves its upscaled objectives even before reaching its rapt conclusion — but like so much on Bella Union’s high quality roster, Landshapes’ debut is both assured and assertive in its sense of self, imbued with an individual and fully realised identity. Each song reaffirms the album’s grander essence and even if familiarity breeds a desire for the unexpected, there are no sounds out of place. All four band members contribute to a crisply bittersweet citrus wash of vocals.
Ψ   Although more nuanced textures take time to emerge through the sustained stylistic soundscape, Rambutan earns instant respect for its creators’ new direction. It isn’t quite a landmark album — but it is a milestone, and deserves its plaudits with or without reference to Landshapes’ own transformation.
Fortaken: http://thelineofbestfit.com/
In french:
Ψ   Un quatuor londonien (ex Lulu & The Landshades) qui propose de l'indie pop folk variée et plutôt plaisante, meme si l'album est assez inégal. A découvrir.

REVIEW
BY CHRIS GIRDLER | Score: 4/5 stars
Ψ   The tracks switch tempos at unexpected points without becoming chaotic, while lyrics are approached from different angles according to the ebb and flow of the music. For all the shape-shifting, Rambutan is a debut that confidently makes its mark. London’s Landshapes recently compressed their name down from Lulu and the Lampshades, which was a bit of a mouthful and made them sound like a go-go girl band. The one-time-Lampshades were best known for ‘You’re Gonna Miss Me (Cups)’, a take on a Carter Family classic from the 30s that was in turn covered by numerous YouTubers and, most famously, by Anna Kendrick in Pitch Perfect.   The consolidation of the band name is matched with a focused sound that’s very much their own. Their love of traditional folk is evident, but it’s given a modern twist and darker edge for their full-length album for the reliably great Bella Union label. The four-piece playfully skirt around various genres, but unite them with purpose and form a distinctive, cohesive album that’s easy to warm to.   The deceptively titled opener, ‘Racehorse’, is a gradually unfolding ballad that creeps in to the eerie sound of creaking gates. Its lethargic pace is atypical of the album and we’re soon pulled into the restless energy of the assertive ‘In Limbo’, a riveting highlight that rides along with propulsive bursts of post-punk guitar wig-outs. Fortaken: http://www.thebrag.com/
Also:
by Larry Day | 20 June 2013 | Rating: 7/10
¤  http://thefourohfive.com/review/article/landshapes-rambutan
Review by Scott Kerr | Score: ***½
¤  http://www.allmusic.com/album/rambutan-mw0002530626
by Matt Yau | http://www.goldflakepaint.co.uk/review-landshapes-rambutan/
Written by Ben Bland | Score: ***½
¤  http://www.stereoboard.com/content/view/179579/9
Words: Becky Varley-Winter • 22 July 2013
¤  http://www.forfolkssake.com/reviews/24114/album-landshapes-rambutan
By mrevue: http://mrevue.wordpress.com/2013/10/21/rambutan-landshapes/
By Christian Northwood | Posted on June 24, 2013 | Globes: 8/10
¤  http://fromthebucket.com/2013/06/24/review-landshapes-rambutan/
Website: http://www.landshapes.bigcartel.com/
Label: http://bellaunion.com/artists/landshapes/
Twitter: https://twitter.com/landshapesband
Facebook: https://www.facebook.com/Landshapes
YouTube: http://www.youtube.com/watch?feature=player_embedded&v=sjgg3ZNkTu0
Soundcloud: https://soundcloud.com/landshapesband

Biography —
¤  In a fickle, hyper-speed age of quick and easy consumption, taking one’s time to evolve seems a luxury. But Landshapes did just that. “We needed time to work things out… we’ve been brewing I suppose…” explains Luisa.
¤  As their previous incarnation Lulu and the Lampshades, they’re probably best known for the viral cup song You’re Gonna Miss Me — over 3 million hits on Youtube and counting — but in the ensuing period they’ve undergone a considerable musical metamorphosis.
¤  They have learnt and grown together, four distinctive personalities jostling and pulling, each with their own set of influences and sensibilities — an unlikely alchemy which comes together and makes sense. Broad brushstrokes, big sounds and mournful melodies forged a new soundscape, so that when a typo accidentally billed them as ‘Landshapes’ it seemed an appropriate description for an altogether new sound, and an altogether new band.
¤  Landshapes is the sound of four people in a dingy practice room, building on accidents, listening over and reworking obsessively until every band member is satisfied. An unconventional and serendipitous a process it might be, but it’s crucial to Landshapes overall sound.
¤  Their debut album Rambutan — the name chosen “not so much after the fruit but for the sound the word makes” and produced by Ash Workman is a distillation of songs old and new, re-worked and fine tuned with a deft precision.
¤  In Limbo, with its stunning video, proves a triumphant opening salvo. “It’s always felt like a fighting song both musically and lyrically” says Luisa Gerstein. With images of Bolivia’s Cholita female wrestlers proving a major stimulus whilst recording, Luisa sought them out, traveling to La Paz and teaming up with director Ian Pons Jewell. The resulting film is a dignified response to a “Latin American society where being both indigenous and a woman is a double sub-class” — a celebration of these extraordinary women both in and out of the wrestling ring.
¤  Their unorthodox approach to songwriting is writ large across the ten tracks. Impasse “the oldest song on the record was a “tinkery ukulele thing” that became something “bigger and better with the band”; Threads “a lot of ideas that came together in the practice room, has the feel of different parts interjecting like a conversation” and Racehorses “a truculent song” that was to become one of their favourites after Heloise and Jemma developed a new bass and guitar part. Demons acts as a marker of their evolution — “recorded as Lulu And The Lampshades, it felt closer to the sound we were developing and tracks that change in the way it sounds and how we worked together as a band.”
¤  Forthcoming single Insomniacs Club “is cursed” according to the band. “Anyone who gets involved with it gets insomnia. The guy making the video hasn’t slept for days, true story.”
¤  Landshapes take on another dimension in a live setting. With drummer Dan the only constant, multi instrumentalists Luisa, Heloise and Jemma shift seamlessly from one song to the next swapping instruments and vocals with a fluid dexterity. This synchronicity — and their evolution as a band — was helped by some intensive touring under their previous moniker. Weeks spent in each others’ company, experiencing each others’ music and film selections, means — explains Dan — that “you start to absorb what you like and dislike, individually and collectively. Figuring out which direction you’re heading in via shared experience and foggy disparate influences. I think we’re still fine tuning that direction — and that’s good.”
_______________________________________________________________