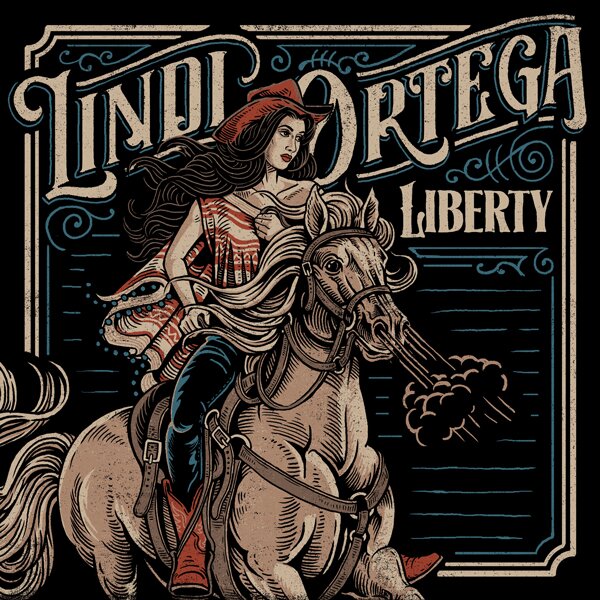 Born: May 28, 1980 in Toronto, Ontario, Canada
Location: Toronto, Ontario, Canada ~ Nashville, TN
Album release: March 30, 2018
Record Label: Shadowbox Records / Soundly Music, LLC
Duration:     46:31
LIBERTY TRACKS:
Through The Dust Part I     1:25
01. Afraid of the Dark     4:03
02. You Ain’t Foolin’ Me     4:32
03. ‘Til My Dyin’ Day     3:00
04. Nothing’s Impossible     2:42
Though The Dust Part II     1:06
05. The Comeback Kid     2:58
06. Darkness Be Gone     3:50
07. Forever Blue     3:43
08. In The Clear     4:03
09. Pablo     4:19
10. Lovers In Love     3:06
Through The Dust Part III     1:05
11. Liberty     3:07
12. Gracias a la Vida     3:06
AllMusic Review by Thom Jurek;  Score: ****
•Ω•      In the early 2010s, Canadian born alt~country singer/songwriter Lindi Ortega had had enough. Discouraged with not being able to make a living despite having charting records, Juno and Grammy nominations, critical acclaim, and endless touring, she chucked everything: Nashville, her label, her agent, and her manager, and moved to Calgary. She got married and, inspired by her husband and new manager, tried again, resulting in 2017’s acclaimed Til the Goin’ Gets Gone EP.
•Ω•      Liberty, her cinematic seventh album, is the story of that journey. It’s a concept record about a journey through darkness to light. Its songs are thematically linked as stages in transition. Inspired by the spaghetti western scores of Ennio Morricone, Bruno Nicolai, and Nico Fidenco, and the unruly movies of Quentin Tarantino, she returned to Nashville to work with producer Skylar Wilson — the two bonded over Tarantino’s films — and wrote or co~wrote songs with him, John Paul White, Bruce Wallace, and Aaron Raitiere. She also enlisted Steelism (Spencer Cullum, Jr. on pedal steel and slide, and guitarist Jeremy Fetzer), a Nashville duo whose predominantly instrumental work gravitates toward a widescreen western style of country. The three sections of the uncharacteristically ballad~heavy Liberty are held together by Steelism’s windswept desert theme “Through the Dust.” “Afraid of the Dark,” co~written with White, offers fingerpicked nylon string and electric slide guitars, upright bass, and tom~toms; the grain in Ortega’s voice offers a tale of possession by darkness through self~loathing and depression. A whining steel guitar frames her reverbed singing in a spacious Western, desert~tinged soundscape with the baritone and soprano Liberty Choir chorus adding to the atmosphere. The traces of her rockabilly style pop up in “You Ain’t Feelin Me,” which addresses two~faced acquaintances masquerading as friends amid rumbling drums, B~3 organ, and distorted guitars, as well as a lovely mariachi interlude. The other White co~write is “Nothing’s Impossible,” a lilting, deeply sad honky tonk ballad that could have been produced by a young Owen Bradley. First single “The Comeback Kid (written with Wilson) draws on Marty Robbins, Leon Payne, and Charlie Feathers in a yarn about a character who gets shot but doesn’t die, and who’s now ready to haunt her would~be assassins: “...You took my life and wrecked it/But I’ve been resurrected...” (Think Uma Thurman in Kill Bill.) “Forever Blue” is the first song on the journey to the light. Transcendence and transformation are hinted at first in the ethereal “In the Clear,” co~written with Raitiere, and episodes of romantic love in “Pablo” and Lovers in Love” offer confirmation that our protagonist is on the right track. Her transition is completed in the languid title track and underscored by the album’s lone cover, “Gracias a la Vida,” by Chilean composer Violeta Parra; it’s a bolero~um~mariachi that simply and powerfully expresses gratitude for surviving the darkness and for life and its wonders. While Liberty is more often than not gentler in tone than Ortega's preceding albums, it is by far her most innovative and powerful, and stands as her masterwork thus far. •Ω•        https://www.allmusic.com/