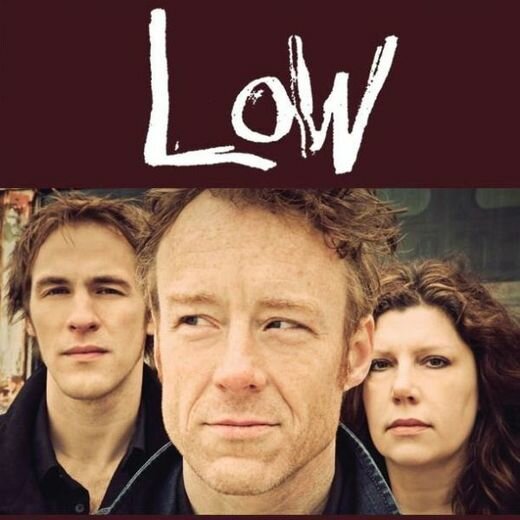 Low — The Invisible Way
Formed: 1993
Location: Duluth, Minnesota
Album release: March 18 (UK), 19 (US), 2013
Record Label: Sub Pop Records
Duration:     41:10
Tracks:
01. Plastic Cup     3:02
02. Amethyst     5:21
03. So Blue     4:23
04. Holy Ghost     3:07
05. Waiting     2:38
06. Clarence White     3:47
07. Four Score     2:56
08. Just Make It Stop     4:09
09. Mother     2:52
10. On My Own     5:44
11. To Our Knees     3:08
Members:
• Alan Sparhawk on vocals and guitar
• Mimi Parker on vocals and drums
• Steve Garrington on bass
• Sparhawk and Parker are married with two children; they first met in fourth grade in rural Minnesota. Garrington is the latest addition to the band, longtime bassist Zak Sally previously replaced original bassist John Nichols and Sally departed the group after the release of Great Destroyer.
Main manager: Geoff Harrison & Christian Roreau
Website: http://chairkickers.com/
Facebook: http://www.facebook.com/lowmusic
Twitter: www.twitter.com/lowtheband
You can contact Low at: LOW, POBox 600, Duluth, MN 55801, USA
• We are excited to release our next record The Invisible Way on March 19, 2013 (March 18 in the UK) on Sub Pop Records. The record was produced by Wilco’s Jeff Tweedy, engineered by Tom Schick and recorded in Wilco’s studio The Loft in Chicago, IL, this fall.
• “While driving through Chicago on tour, we finally stopped to visit Wilco at their studio, The Loft. They had invited us to come check it out several times over the years, but this would finally be the day…What really converted us was hearing the new Mavis Staples tracks they were working on – big, simple, raw and intimate. Plans were made then and there.” – Alan
• We also have a new six-song live set called Plays Nice Places for you to download that includes a new song called “Waiting” and a version of “Words” featuring Death Cab for Cutie’s Benjamin Gibbard on bass and vocals. The songs were recorded at various historic theaters on our April 2012 tour with DCFC. Download Plays Nice Places in the widget off to your right and feel free to share it with a friend who would enjoy. The track listing is below:
• Words (featuring Benjamin Gibbard *)
• Waiting
• Sunflower
• Witches
• Pissing
• Murderer
* Benjamin Gibbard appears courtesy of Atlantic Records
• Low returns to Europe to celebrate the release of The Invisible Way. Tickets are onsale now. Dates:
April
• 24 – Birmingham, UK – Glee Club
• 25 – Manchester, UK – Central Methodist Hall
• 26 – Gateshead, UK – The Sage Gateshead
• 27 – Glasgow, UK – Classic Grand
• 29 – Bristol, UK – Trinity
• 30 – London, UK – Barbican Centre
May
• 02 – Copehnhagen, Denmark – Loppen
• 03 – Stockholm, Sweden – Debaser
• 04 – Oslo, Norway – Bla
• 07 – Paris, France – La Maroquinerie
• 08 – Brussels, Belgium – Cirque Royal – Nuits Botanique
• 09 – Amsterdam, The Netherlands – Paradiso De Duif
• 10 – Frankfurt, Germany – Zoom
• 11 – Bologna, Italy – Teatro Antoniano
• 13 – Barcelona, Spain – Casino de la Alianca
• 14 – Valencia, Spain – Teatro La Rambleta
• 15 – Zaragoza, Spain – Teatro de las Esquina
• 16 – Madrid, Spain – Joy Eslava
• Low. A band from Duluth, Minnesota, formed in 1993. Featuring Alan Sparhawk on vocals and guitar and Mimi Parker on vocals and drums and Steve Garrington on bass. • Sparhawk and Parker are married with two children; they first met in fourth grade in rural Minnesota. Garrington is the latest addition to the band, longtime bassist Zak Sally previously replaced original bassist John Nichols and Sally d...eparted the group after the release of Great Destroyer.
• Low released its first album, I Could Live in Hope, in 1994 (producer by Kramer) on Vernon Yard Records. Pegged as "slowcore," due to the band's minimalist soundscapes and the beautiful harmonies of Sparhawk and Parker, which stood in stark contrast to the era's fascination with "grunge." Low continued to work with varied producers and released a constant stream of critically acclaimed albums (e.g., Long Division, Curtain Hits the Cast, Things We Lost in the Fire), one-offs, collaborations and other miscellany, including a classic Christmas album, aptly titled Low Christmas. Throughout, Low toured the world and eventually found themselves in the company of acts such as the Dirty Three, Radiohead and Nick Cave and the Bad Seeds.
• Sparhawk has formed a few side projects, notably the dirty punk blues band, The Black Eyed Snakes and, most recently, the rock trio The Retribution Gospel Choir. Low's latest album, Drums and Guns (produced by Dave Fridmann), was released in 2007 on Sub Pop Recordss.
--------------------------------------------------------------------
Alan Sparhawk:
• Alan Sparhawk is the guitarist and vocalist for Minnesota bands Low and Retribution Gospel Choir.
Biography:    George Alan Sparhawk (goes by Alan) was born in Seattle, Washington and grew up in Utah. He met Mimi Parker when he was 9, after his family moved to Minnesota. Sparhawk began writing his own compositions around the age of 13. He later married Parker, and eventually began performing with her in the band Low, releasing their first album in 1994. As of 2011, Low has released nine full-length studio albums.
• Alan and Mimi are members of the Mormon faith, about which Sparhawk has said, "our spiritual beliefs encompass our whole life and understanding of who we are and what we do."
• Sparhawk is also a member of the blues-roots band Black Eyed Snakes, the blues-dub jam band Los Besos, and the rock band Retribution Gospel Choir. He also occasionally plays solo shows in his hometown.
• As a solo artist, Sparhawk released his debut album entitled Solo Guitar in August, 2006. He also released a track on a various artists compilation Songs for the End of the World as Hollis M. Sparhawk & Her Father, and the track Be Nice To People With Lice on the various artists compilation album See You on the Moon!. In 2007 he did a Take-Away Show acoustic video session shot by Vincent Moon.
• Sparhawk has done charity work with the Maasai tribe in Kenya. After a friend of his became a friend of the village of Namuncha, he played a Christmas show in order to raise funds to build a school there, where students had previously been meeting in the shade outside. He calls the experience of visiting the Maasai one of the most spiritual of his life.
• Alan and Mimi live in Duluth, Minnesota, with their two children.
• In 2012, Alan Sparhawk, along with with violist and vocalist Gaelynn Lea, created the group The Murder of Crows. Their first album, Imperfecta was released June 2012.
Low interview: http://users.skynet.be/entrepot/int/low.html
Also: http://www.skny.com
-------------------------------------------------------------------- "Something's Turning Over"

1.)  As a child I hid between the pages
Cutting secret phrases overhead
But things we turn our back on when we're older
Only drag us back into our bed

Mezzo:   Get out while you're young

3.) Every now and then I feel them breathing
Moving through the rooms so quietly
And just because you never hear their voices
Don't mean they won't kill you in your sleep