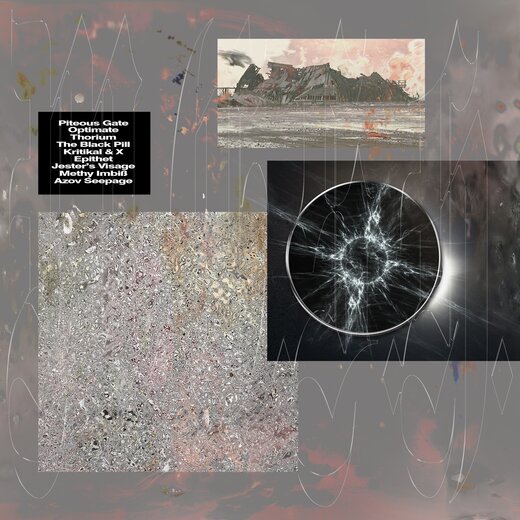 REVIEW
By Bryon Hayes, Published Jul 15, 2015;  Score: 9
¬•••   As can be expected from any release on Bill Kouligas’ PAN imprint, Piteous Gate — the debut full–length from Berlin–based producer James Whipple — completely obliterates and re–constructs what can be expected from an electronic music release. ¬•••   Beats flourish with fractal geometry, cross paths with other sonic elements, only to be tugged from whatever path they were on to ultimately vanish shockingly. Electronic creaks, oblique stringed instrument structures, the slicing of a sword through fruit and other sinister ingredients ratchet up the tension here, until explosion feels imminent. This tautness is somehow maintained as each piece of music flows into the next, ultimately only evaporating as “Azov Seepage,” the closing track, disappears from earshot.
¬•••   Whipple’s previous PAN release, the Scythians EP, hinted at the greatness to come from this Janus club night co–founder, yet was a little too short to really demonstrate his true power. It took a full–length release to truly suss out the immensity of M.E.S.H. ¬•••   http://exclaim.ca/

© Photography by Julia Burlingham
REVIEW
By SOE JHERWOOD on Jun 18 2015
¬•••   M.E.S.H. is straight–up DOING it right now, pulling back the framework of club music and contorting it into something altogether more sinister and fragmented. Last year’s Scythians EP satiated us; the more recent Infra–Dusk/Infra–Dawn release for Black Ocean drew us in closer still; and now he’s lurked back onto PAN with the announcement of his debut full–length, Piteous Gate.

REVIEW
Euan Andrews, July 17th, 2015 09:03
¬•••   http://thequietus.com/articles/18353-m-e-s-h-piteous-gate-review
WRITTEN BY SCOTT WILSON ON SUNDAY, JULY 12 2015
¬•••   http://www.factmag.com/2015/07/12/m-e-s-h-piteous-gate-interview/
¬•••   As a member of the Janus crew &mdsah who are no strangers to the pages of TMT &mdsah M.E.S.H. (real name James Whipple) injects a degree of havoc into his productions, making for an uneasy blend of caustic textures and loosely–programmed beats, with occasionally danceable patterns emerging from the static. It’s a modus operandi that has served him well thus far, and the transition from the short–form to a fully–fledged LP will be an exciting one to bear witness to.
¬•••   http://exclaim.ca/
Soundcloud: https://soundcloud.com/m-e-s-h
Thomas Painter, Score: 17 / 20
¬•••   http://crackmagazine.net/article/music/m-e-s-h-piteous-gate/