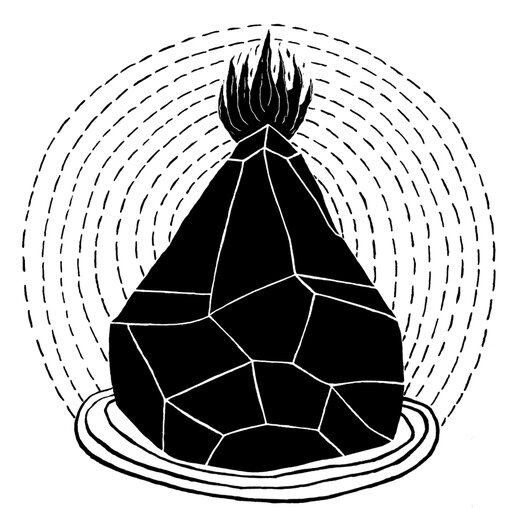 Mai Mai Mai — Πέτρα (Petra) EP (May 31, 2015)
≡♠   Since childhood, he followed his parents around Europe and the Near East, assimilating the different cultures, atmospheres and sonorities of the places he was involuntarily taken to. This project is the transposition of those experiences into music and sounds: a mix of drone and ambient, steamy rhythmics, field recordings and sound–scapes
Location: Rome, Italy
Album release: May 31, 2015
Recorded and Mixed: in Rome by V.Fisik in January 2015
Record Label: CORPOC
Duration:     19:25
Tracks:
1. Βάσσαι / Bassae     10:35
2. Πέτρα / Petra      3:36
3. Πέλαγος / Pelagos      5:14
Credits:
≡♠   Mai Mai Mai: synths, beats, samples, tapes, voices
≡♠   Percussions on Πέτρα by Nastro
•      Edition of 300
•      WHITE Vinyl
•      Silkscreened on B Side
•      Artwork by Andreco
•      12 pages booklet with Photos by Ilaria Doimo
•      (digital print, screenprinted cover with golden ink, handprinted)
Review
Brendan Telford, June 22nd, 2015 13:31
≡♠   Petra continues Italian noisemaker Mai Mai Mai’s inexorable downward spiral into the core of the aural unknown. Following a triptych of records marking out a topography of aural (extra)terrestrial terrain of the dark imagination, the one-sided album continues from 2013’s Theta (on Boring Machines) and last year’s Delta (Yerevan Tapes). It seems fitting for this apocryphal skree in a physical as well as aural endpoint — the B–side of the vinyl is etched with the alchemical sketchings of the artist Andreco which also adorns the cover art, an artistic and alluring yet cold aberration of the accepted form. Yet there is a sense of interaction to the point of penetration about Petra that belies its true purpose — to become irrevocably one with the worlds the music creates, a HR Giger construct of organic, orgiastic fusion.
≡♠   The album starts with the ten minute behemoth ‘Bassae’, and the slow bleed of bleeping glitches plays out like a crackling radio connection from a space exploration probe back to earth. The transmission is intermittent, marred by extraneous interference, and lends itself an authority of found–sound immediacy and authenticity. This of course makes the slow–dread drone pulse that pounds through after the first minute mark a far more disturbing advancement — we are immediately put into a position of existential trepidation, lent weight from prior knowledge of fetishised sci–fi horror and claustrophobic chest–tightening tension. The concentration of these combative synthetic noises ebbs and flows though, just as if the frequency of the transmission is faltering, before coming into sharp focus, the intensity ratcheted, the rhythms of the pulse and the heart lurching further forward into the chest.
≡♠   There is a dual creeping sensation here though, as the temporal temperature drops, as to whether we are drifting further into the dark unexplored corners of space or being lowered exponentially into the soil, a consistent descent into the earthen layers under our feet that are no less unknown. ‘Bassae’ is horrifyingly enthralling, and when the static crashes into a harsh beat and a subterranean organ drone rips and tears into the final third, it’s hard to tell whether this is indeed the core of the terrestrial plane, or a cultish awakening to a Divine Other that is enigmatic, charismatic and terrifying. In fact, the exultant love/fear dichotomy that exists at the end of this piece plays out like the ending to Ben Wheatley’s film Kill List back in 2011 — the abject horror at the dawning future only matched by an extreme awe in its macabre brilliance.
≡♠   It was always going to be difficult to match this, and the other two tracks here don’t try to, stepping down into concise sensory capsules, easy to consume but no less transformative. The title track features the hooded artist’s spoken word vocals, crackling from the ether like found footage, a lost broadcast from a transworld explorer reaching dubious epiphanies before meeting his Maker. ‘Pelagos’ is the aftermath — a manned mission, now unmanned, hits the core, the seabed, the outer sine waves of the universe. We hear the burbling liquid, the pneumatic propulsion through terminal viscera, the capsule fraying, capitulating to pressure, to friction, refracting, disintegrating.
≡♠   Petra then is a study of alien expanse, a man vs. the environment at its most sparse and desolate, sinister only in the absence of humanity, and how that expanse is never understood or surmounted; rather it continues to exist unchanged and unfettered, immutable well after humanity tries and fails to make it malleable. And therein lies the beauty — Mai Mai Mai turns harsh unearthly sonics into a primordial, hypnotic gravitational power, the attraction precisely in the awestruck horror such soundscapes naturally evokes — revelling in that awful realisation that your presence is dwarfed into insignificance by this aeons–old atmosphere over which you have no control. His exploration of these disparate worlds is yet to reach its conclusion, yet Petra proves to be a hauntingly provocative conduit. ≡♠   http://thequietus.com/
Bandcamp: https://maimaimai.bandcamp.com/album/petra
_____________________________________________________________