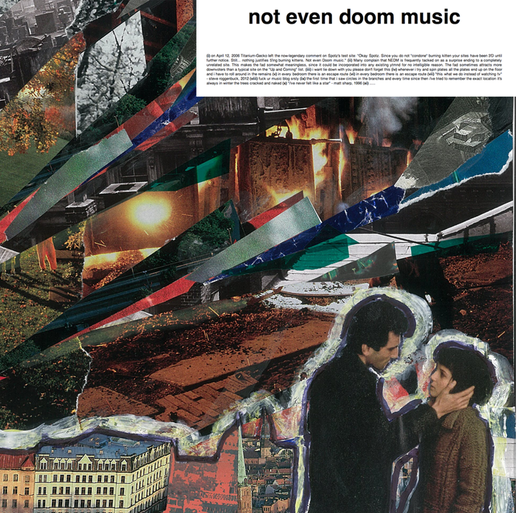 Mat Riviere — Not Even Doom Music
Location: London, UK
Album release: April 1, 2013
Record Label: Brainlove Records
Duration:     39:14
Tracks:
01. Wool     3:18
02. In ~2 Seconds     2:52
03. Salathund     3:02
04. Greece     5:20
05. Nedm     3:43
06. The City Is as Cold as You Want It to Be     5:02
07. Summons     5:44
08. Coal     3:39
09. Warned     3:05
10. The Garden     3:29
Artwork by Rosanna Thompson: www.rosannamarythompson.blogspot.co.uk
•  in memory of mottles
Bandcamp: http://matriviere.bandcamp.com/album/not-even-doom-music
Facebook: https://www.facebook.com/matriviere
Blog: http://matriviere.blogspot.com
REVIEW
by Rob Hollamby, 06 June 2013
Score: 7/10
•  In a recent piece for The Quietus, Norwich-bred soundscapeer Mat Riviere detailed an awkward festival experience in Spain, after which he penned the majority of the lyrics for 'NEDM', de facto title track from his latest full-length. "Felt simultaneously humbled/depressed/overwhelmed that I was even there," he writes, "and very unsure of why anyone would even choose to do music in the first place. Worried a lot about the reasons I do music."
•  I feel ya, buddy. Swap out the 'do's for 'write about's, and I feel ya.
•  I mention all this not because I feel the need for a third party to shore up my wobbly confidence in why I see fit to publish these odd readings of other people's music (hell, I'm not sure even my friends read these. Also, fuck you), but because Not Even Doom Music is a record that has split me right down the middle. Rivere's turned out, apparently, to be a press-kit pith-quote dream - we get "genius bleak pop" from the NME, "simply fantastic" from Artrocker, "glitchy, lo-fi, minimal pop heartaches" from TLOBF. You see where I'm going with this.
•  This is problematic, because there's a reactionary in me who's grown at least to my shoulder, and lord knows that Riviere doesn't make things easy. He alternately croons, shivers, husks and yells in a strange baritone not a million miles off Paul Banks, if the Interpol man had an unshakeable sinus problem and a pronounced distaste for the close proximity of microphones. 'NEDM' inverts hip-hop's braggadocio and drains away its sexiness, Riviere proclaiming "don't want no hype" over mallowy synth and an off-kilter drum loop. Initial listens had that cynic inside me spewing half-formed diatribe, damning another awkward misery-guts for appropriating what used to be funky and dangerous and turning it into something anaemic. Likewise, the childlike simplicity of the acoustic loop in 'Salathund' felt willfully obtuse, and the way that 'Summons' somehow sounds like both Do Make Say Think (minus drums) and Sparklehorse, without approaching the stratospheric propulsion of the former or the blasted wreckage of the latter, frustrating.
•  "I don't get this," snarled the cynic, "and I resent that other people seem to."
•  I felt simultaneously humbled/depressed/overwhelmed that I was even there.
•  So there was a point, around the third or fourth listen to Not Even Doom Music, that I wanted to write the whole thing off. It's easy to notice the painstaking craft that Riviere brings to his music - the snippets of dialogue (cuts from Rivers Cuomo and Vera Brittain among them), the washes of traffic, the impeccably crystalline music boxes that open 'In ~2 Seconds'. But an artisanal mastery of sound does not alone equal the sort of music I long for, the sort of songs that burrow their way into your centre and build themselves a jealous keep in there. But little things kept me listening. •  Not least opener 'Wool', the most immediate thing on here, a song whose clanking piano bears resemblance to something off Fevers and Mirrors, whose dusky synths shroud it in a luscious darkness. I began to take immense pleasure in 'Greece', for how its fuzzing, bass-heavy slabs of noise brought to mind my much-missed Parts & Labor, and 'Gardens' for its skysized and gutwrenching hook, a kid's wish roared at the night by disillusioned adulthood. And the little things kept creeping in. I started to notice that when I'd made it through the 2.5 minutes of atonal bell'n'drone interplay that opens 'The City Is As Cold As You Want It To Be', it becomes a glitchy, distant anthem easily as good as anything off Life After Defo. I started to notice that 'Salathund' builds from that faltering, babyish guitar into tectonic shifts of shivering string ecstasy, that there's a weird but genuine groove to 'NEDM's brutal reductivism.
•  I don't love Not Even Doom Music, not in the pure and hot-hearted way that I love Japandroids, or Titus Andronicus, or most of the music I listen to with any regularity. I don't love it for possessing the fractured x-ray mirror that Bright Eyes or The National hold up to my insides, though it takes something from both artists. But nor is listening to Mat Riviere's second record a simple exercise in academia, as a set of expertly-corralled sounds selected and arranged by a skilled pair of ears. Not Even Doom Music, at its best, is so much more than this. It's songs. And songs are the reason I chose to do music in the first place.
Fortaken: http://thefourohfive.com/
Also:
•  http://thequietus.com/articles/12271-mat-riviere-not-even-doom-music

in the car back from town
i felt like breaking/braking
you kept your head down
is that a word i couldn't say?